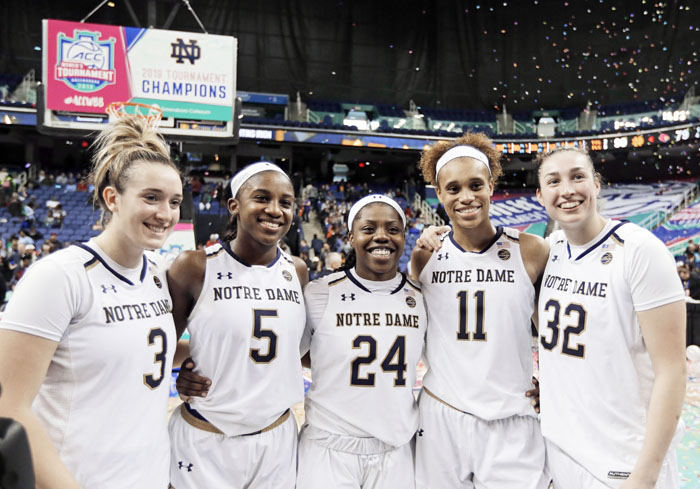 GREENSBORO (AP) — Jessica Shepard had a season-high 30 points and 13 rebounds, and No. 4 Notre Dame claimed its fifth Atlantic Coast Conference Tournament title in six years by routing No. 3 Louisville 99-79 on Sunday.
Jackie Young added 21 points and 10 rebounds, Brianna Turner had 20 points and Marina Mabrey and Arike Ogunbowale scored 12 apiece for the top-seeded Fighting Irish (30-3).
The defending national champs never trailed in beating the Cardinals for the second time this season and avenging their loss in last year’s ACC championship game — their only one in conference tournament play since joining the ACC in 2013-14.
Bionca Dunham scored 18 points and ACC player of the year Asia Durr finished with 15 for the second-seeded and short-handed Cardinals (29-3), who couldn’t keep the Irish out of the lane and struggled from long range.

NO. 7 STANFORD 64, NO. 6 OREGON 57
LAS VEGAS (AP) — DiJonai Carrington scored 22 points, and Stanford erased some unpleasant recent history against Oregon to win the Pac-12 Tournament title.
For the Cardinal (28-4), it was their 13th tournament championship in the last 18, and they took a measure of revenge after losing to Oregon in the title game last season. The Ducks also routed Stanford by 40 points a month ago, the worst defeat in Hall of Fame coach Tara VanDerveer’s career.
Sabrina Ionescu, who led Oregon with 27 points and 12 rebounds, ended a four-minute field goal drought with a jumper with 1:14 left. She was the only Oregon player to hit a basket for the Ducks (29-4) in the final eight minutes.
Stanford made all six of its free throws in the final minute to seal the victory. As the final seconds ticked off, the Cardinal players ran to half-court to celebrate.

NO. 1 BAYLOR 88, KANSAS STATE 60
OKLAHOMA CITY (AP) — Kalani Brown scored 23 points in 21 minutes, and Baylor breezed past Kansas State in a Big 12 tournament semifinal.
Juicy Landrum scored 19 points and Lauren Cox had 18 points, 15 rebounds and eight assists for the Lady Bears (30-1), who won their 22nd straight game. Baylor shot 45 percent from the floor and outrebounded the Wildcats 54-32.
Baylor (30-1) will go for its ninth tournament title in 11 years on Monday night against No. 19 Iowa State.
Peyton Williams and Christianna Carr each scored 12 points for Kansas State (21-11), which had its six-game winning streak snapped.

NO. 5 MISSISSIPPI STATE 101, ARKANSAS 70
GREENVILLE, S.C. (AP) — Teaira McCowan had 24 points and 14 rebounds, and Mississippi State pounded Arkansas to win its first Southeastern Conference Tournament championship.
The Bulldogs (30-2) and McCowan scored the most points ever in an SEC Tournament title game — and ended their own 0-4 mark when reaching the event finals. They took control with an 18-0 run in the first quarter and never gave the Razorbacks (20-14) hope for a comeback.
Mississippi State surpassed Georgia’s 94 points in winning the 1986 event.
Chelsea Dungee led Arkansas with 24 points.

NO. 10 IOWA 90, NO. 8 MARYLAND 76
INDIANAPOLIS (AP) — Megan Gustafson scored 26 points in the first half and finished with 45 to lead Iowa past Maryland for its first Big Ten Tournament title since 2001.
It’s the longest gap between conference crowns since the tourney became an annual event in 1995. The Hawkeyes (26-6) also claimed the league’s automatic NCAA Tournament bid with a victory over the Big Ten’s regular-season champion.
Gustafson’s point total was the second-most in tourney history, trailing only her 48-point performance in a quarterfinal loss to Minnesota last year.
Kaila Charles scored a career-high 36 points and grabbed nine rebounds for the Terrapins (28-4), who lost for just the second time in 14 games — both to Iowa and this time largely because of Gustafson’s incredible start.

NO. 19 IOWA STATE 75, NO. 21 TEXAS 69
OKLAHOMA CITY (AP) — Alexa Middleton scored 24 points, Bridget Carleton and Ashley Joens had double-doubles and Iowa State took control down the stretch to defeat Texas in the Big 12 Tournament semifinals.
The second-seeded Cyclones (25-7), winners of five straight, face No. 1 Baylor on Monday night in their first championship game appearance since 2013.
Carleton, the Big 12 Player of the Year, had 17 points and 10 rebounds. Joens added 13 and 12.
Joyner Holmes led third-seeded Texas (23-9) with 19 points and Jatarie White added 10.