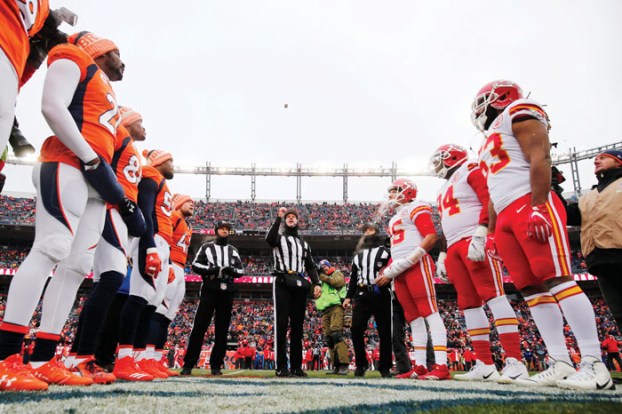 FILE - In this Dec. 31, 2017, file photo, a referee tosses a coin as Kansas City Chiefs and Denver Broncos players look on before an NFL football game in Denver. NFL teams have proposed major changes to replay and overtime after a season of consistent criticism of officiating. The Chiefs want to eliminate overtime for the preseason; and get rid of the overtime coin toss so that winner of the coin toss to begin the game may choose whether to kick or receive, or which goal to defend in overtime (AP Photo/Jack Dempsey, File)

NFL teams proposed major changes to replay and overtime on Saturday after a season of consistent criticism of officiating and which plays can be challenged or automatically reviewed.

Among the proposals teams have made to the league’s competition committee are an increase in the number of plays subject to video replay review and a change to the overtime format.

The idea of more or even unlimited coaches’ challenges is not new, but could have stronger support now. Also, the league is reluctant to expand replays for officiating because it would slow games even further.

The competition committee will present teams’ proposals and some of its own to the 32 owners at the league meetings March 24-27.

Washington wants any play to be subject to coaches’ challenges or to automatic review by the officiating department in New York. The Redskins also suggested that all personal fouls be subject to review, while Kansas City added potential personal fouls that were not called on the field be looked at.

Philadelphia seeks scoring plays and turnovers negated by a penalty be immediately reviewed, and Denver suggests adding all fourth-down plays that are spotted short of a first down or the goal line, and all extra-point tries.

The Rams, Panthers, Seahawks and Eagles want to include reviews of designated player safety-related fouls whether called or not on the field.

Kansas City proposes that both teams possess the ball at least one time in overtime even if the first team with the ball scores a touchdown.

The Chiefs also want to eliminate overtime for the preseason, and get rid of the overtime coin toss so that the winner of the coin toss to begin the game may choose whether to kick or receive, or which goal to defend in OT.

Fans and many media members have vociferously expressed displeasure with the current system regarding coaches’ challenges since a blown call late in the NFC championship game — officials missed a blatant pass interference penalty and a helmet-first hit by the Rams’ Nickell Robey-Coleman deep in Los Angeles territory. The non-calls helped Los Angeles force overtime and eventually win the game to reach the Super Bowl.

But New York Giants owner John Mara said last month at the NFL combine that the powerful competition committee might not feel the same way.

While the league is wary of expanded replays, the Eagles’ suggestion on scoring plays and turnovers negated by penalty being reviewed could garner support.

Kansas City’s overtime proposals also stem from recent developments, including the Chiefs losing the AFC championship after rallying to tie New England. The Patriots won the coin toss, drove downfield and scored a touchdown without KC ever touching the ball.

Denver recommended an alternative to onside kicks by allowing a team once during the fourth quarter to play offense instead. That team must notify the referee of its intention to forgo a kickoff or safety kick. The ball will be spotted on the kicking team’s 35-yard line and that team will have one down to gain 15 yards, essentially a fourth-and-15 play. If the play succeeds in gaining a first down, that team keeps possession as if it recovered an onside kick.