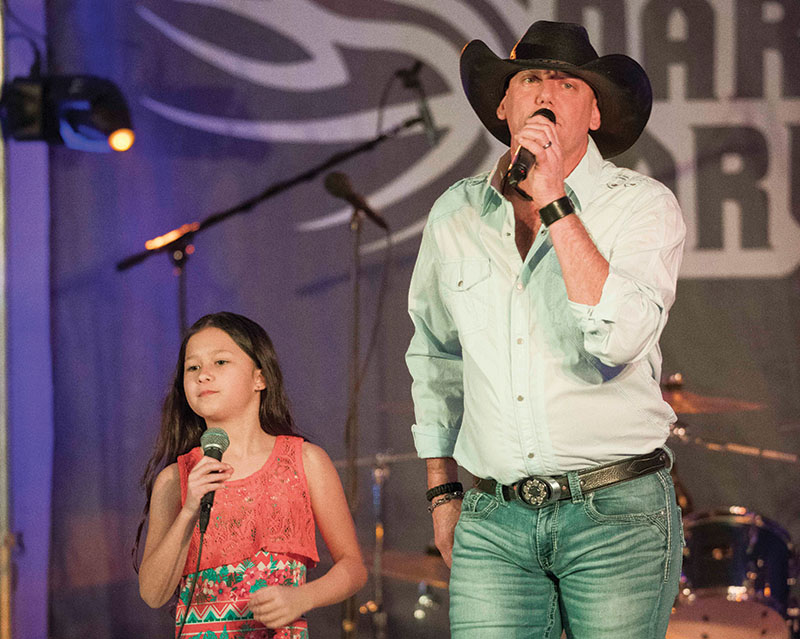 MILLBRIDGE — Imagine the lights on towers, huge amplifiers, a heavy curtain and hundreds of people staring back at you.

These are the conditions performers in Millbridge Elementary School’s 11th annual Talent Show confronted as they took the stage Friday night. The scene did not go unnoticed by the talent show’s special guest and master of ceremonies, Darrell Harwood.

“When I think back to when I was in school, there’s no way I would get on stage,” Harwood said at one point in the evening. “Give me a big, fat zero.”

Harwood attended China Grove Elementary, if you were wondering.

But it was Harwood and his band’s being on stage and performing at various times during the show that seemed to buoy the young participants’ confidence — and raise a good amount of money for the Millbridge PTA.

All 325 tickets for the show sold out. And there was plenty of action at the $1 concession stand during intermission, while Harwood and his band played.

Harwood introduced and spoke with each student performer, and the night’s finale was the band and all the talent show kids gathering on stage to sing “Wagon Wheel.”

Harwood and bandmates Eric Upton, Chip Coleman, Chad Talbert and Chris Hamlett donated their time to the fundraiser, and at times even provided the accompaniment for some of the young singers.

Fifth-grader Kenley Walker blew away the house by singing the national anthem solo, then kicking things off by singing the Carrie Underwood song, “See You Again.”

“That’s the way to start the show, isn’t it?” Harwood asked, with rousing cheers in response.

He also found another of the many enthusiastic crowd responses Friday night when he asked, “How are we doing, Millbridge?”

That’s just what a lead singer does at concerts, you know.

In all, the evening had 17 student acts representing the third, fourth and fifth grades at Millbridge and taking in 22 kids overall — 23 if you count ventriloquist Avery Frampton’s doll partner, Annie.

“It takes a lot to get up in front of people — and they shine and perform,” Principal Jordan Baker said.

April Weaver, a third-grade teacher at Millbridge, served as the talent show’s director. How did she land the talented Harwood, much less the band to go with him?

Then Harwood ran the idea of a free appearance at a local elementary school by his bandmates. They were all in, too.

“They have been so amazing,” Weaver said before the show began. “He’s just excited about the whole thing. They all are.”

When Jack Baker wasn’t moonwalking and doing handstands and flips as part of his hip-hop routine, there were the “Space Boyz” — Burdette and Heintz — to provide some comic relief.

They dressed as astronauts and told space-related jokes, such as the all-time favorite:

“When do astronauts eat?”

Or you all know an astronaut’s favorite key on a computer keyboard:

Harwood took time to embarrass Burdette for a minute when he led the audience in the “Happy Birthday” song for the third-grader.

The night did not include a panel of judges, and no winners were announced or awards handed out at evening’s end. Harwood, his band and all the participants simply went home winners.

And as the Space Boyz might say, you couldn’t “planet” any better.