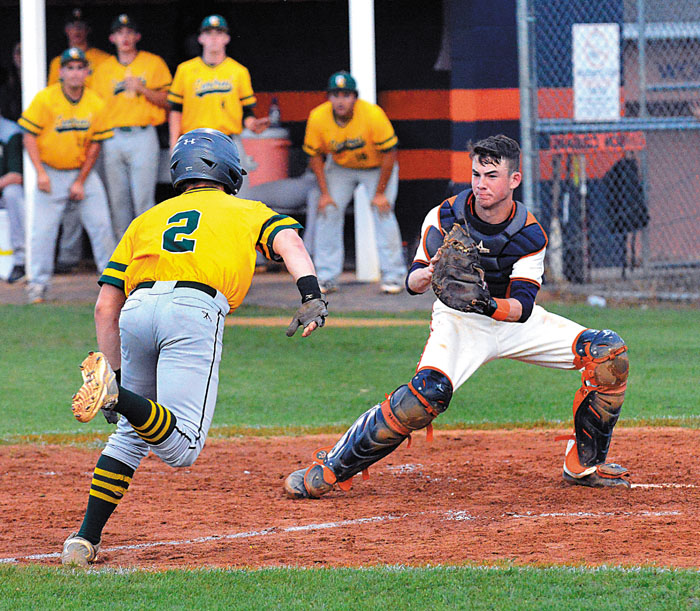 Playoffs: Lost to Crest in 4th round of  playoffs.

CHINA GROVE — Coach Chris Cauble didn’t get to be the all-time wins leader in Rowan County by being a pessimist.

Cauble acknowledges this will be a rebuilding season on the mound for the Cougars, but he insists that it doesn’t have to be a down season.

“We lost Owen White, we lost a Division I lefty (Maddux Holshouser), and we lost a third guy (Cameron Prugh) who could have pitched in college if he’d chosen to do that,” Cauble said. “We lost three big-time arms, but I feel like we’ve still got adequate arms, good defense and good enough offense.”

Losing White, who won player of the year and pitcher of the year accolades at the county, conference and state levels, changes a lot of things at Carson. He was a second-round draft pick by the Texas Rangers. In a phenomenal four-year career, White broke the Carson records for hits, runs, RBIs, doubles, wins and strikeouts. He tied a few more records. He was an army of one.

White led the Cougars to a championship season in 2018, and Carson logged 79 wins during his four years. White was the winning pitcher 32 times. He also was a quality shortstop when he didn’t pitch. Carson has to try to replace him by committee.

Still, no one is feeling sorry for Carson. The Cougars have two-thirds of last summer’s starting Rowan County American Legion outfield in Luke Barringer and Cameron “CP” Pyle. That’s a good place to start a contending team. Pyle often manned second base for the Cougars as a freshman, but now they’ll need him in center field full-time. Barringer, Carson’s big left fielder, has signed with Catawba.

“Barringer has tools, a lot of power, good speed and a good arm,” Cauble said. “And he’s really improved as far as playing the outfield.”

Pyle, a football running back, is a lead-off type with unusual quickness. Barringer will probably be the No. 3 hitter. In an early game this season, Barringer pounded two doubles and a triple. He launched six homers last season and drove in a team-leading 25 runs.

Also returning is catcher Garrett Alewine. He’ll be starting for the third year and will anchor Carson’s defense.

“Alewine is actually a good pitcher, but he’s probably too valuable behind the plate to take him away from there,” Cauble said. “He throws well and excels at blocking pitches. We couldn’t ask for a better catcher.”

Coker signee Cole Hales will be a huge part of what happens this season. He’s the returning starter at third base and brings a gold glove to that position, but he’s also being counted on as the No. 1 pitcher. He’s not big, but he’s competitive and has good stuff.

Hales has pitched infrequently for the Carson varsity because of the people in front of him, but he had overwhelming success (11-0) during a Carson Junior Legion run to the state tournament in Swansboro.

“He’s a tremendous athlete and he earned the respect of his teammates with the way he played for us in the fall,” Cauble said. “He’s fit in well.”

Carson is counting on 6-foot-4 senior Deacon Wike as the No. 2 pitcher behind Hales. Like Hales, Wike is a senior who’s waited his turn. Cauble was impressed with what Wike showed in the fall and his first start this season was a win.  Wike also swings a pretty good bat and can play first base.

Logan Rogers, a junior, played some for the varsity last year. He had eight hits and won a game on the mound. The lefty probably will be the third pitcher. He’s also a candidate for the vacancies at first base and right field.

Dandre Wilkerson is a potential right fielder as well. He’s an athletic football player with a strong arm and he’ll add to Carson’s power and speed.

Aaron Misenheimer enters the season as the new second baseman and is also a pitcher.

Ryan Street will pitch some and will probably be the third baseman when Hales pitches.

Michael Bostian is another pitching candidate and the backup catcher.

Obviously when you lose starters like White, Prugh, Gilmore. Maddux Holshouser and Brycen Holshouser in one class, everyone expects a major step back, but Cauble has won a lot of games for a long time.

“Well, it’s not like we padded our schedule with any easy wins,” Cauble said. “For us to do well, for us to have the kind of season we want to have, we’re going to have to beat some really good teams. I believe our guys are ready for that challenge.”