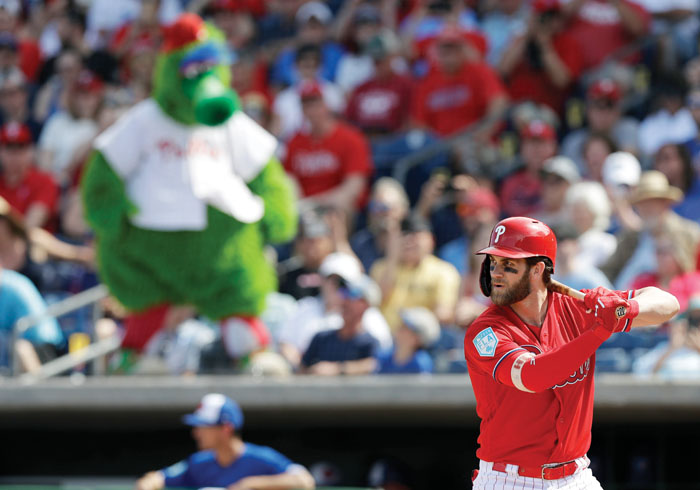 CLEARWATER, Fla. (AP) — Bryce Harper drew big cheers, a pair of walks and a most unusual defense in his spring training debut for the Philadelphia Phillies.

Both times the slugger with the biggest contract in baseball came to the plate, the Toronto Blue Jays shifted to a four-man outfield, moved the shortstop on the other side of second base and gave the left-handed hitting Harper a wide-open left side of the infield.

“I’ve never seen that. That’s intense,” Harper said, adding he hopes teams don’t do that to him often. “If they start playing ball like that, it’s definitely different.”

“Hit a lot of homers, drive the ball like you’re capable of, do exactly what you always do, be Bryce Harper,” Kapler said.

Harper drew a loud ovation  when he walked up to the plate to Will Smith’s theme song from “The Fresh Prince of Bel Air.”

Wearing No. 3 on his uniform, eye black under his eyes and a white armband with “HEART” written in red letters around it, Harper dug into the batter’s box as “In West Philadelphia born and raised…” blared from the stadium’s speakers.

“The ovation they gave me, I’m very humbled, very blessed to be able to get out there and play in front of a fan base like that,” Harper said, adding he’ll probably use a different walk-up song once the season starts. “Selling out a spring training game is pretty incredible to see. Just goes to show how great a fan base Philly is.”

“It was fun to be out there, get some dirt on my cleats, get in the batter’s box and compete. That’s what I love to do,” Harper said. “I was able to see some pitches, take two swings early in the count, see some splits from a good pitcher, really happy where I was today.”

Eduardo Rodriguez made his third start for Boston, pitching four innings and giving up one run. Matt Barnes, in line to be the closer, was tagged in his first appearance for three runs and hits in one inning.

Austin Hays hit his third home run and a double for Baltimore. Starter Dylan Bundy gave up six runs in 1 2/3 innings. The teams combined for nine errors, six by the Orioles, and seven homers.

Michael Fulmer pitched three innings in his third start for Detroit, allowing two runs on four hits and a walk.

Adam Wainwright started for a second time for St. Louis, pitching four scoreless innings and allowing two hits and a walk. Marcell Ozuna singled and scored, snapping a 0-for-14 start.

Seattle third baseman Kyle Seager will see a hand specialist after rolling his left wrist during a spring training game Friday night. It’s unclear if the injury will risk Seager’s status for the Mariners’ season-opening series in Tokyo on March 20-21.

Curtis Granderson ended a 0-for-10 start with a solo home run for Miami.

Pablo Lopez pitched four perfect innings in his first start, striking out four. The Marlins had a perfect game going until Pedro Serverino singled with one out in the eighth off Wei-Yin Chen.

Gary Sanchez, who came into the game batting .059, had an RBI single and a sacrifice fly for New York. Gleyber Torres doubled and scored and Greg Bird added a run-scoring single.

Anthony Santander had a double and is batting .458 for Baltimore. Mychal Givens, in the mix for the closer’s job, pitched a scoreless inning after allowing six runs over 1 1/3 innings in his first two outings.