George Singleton, you crack me up 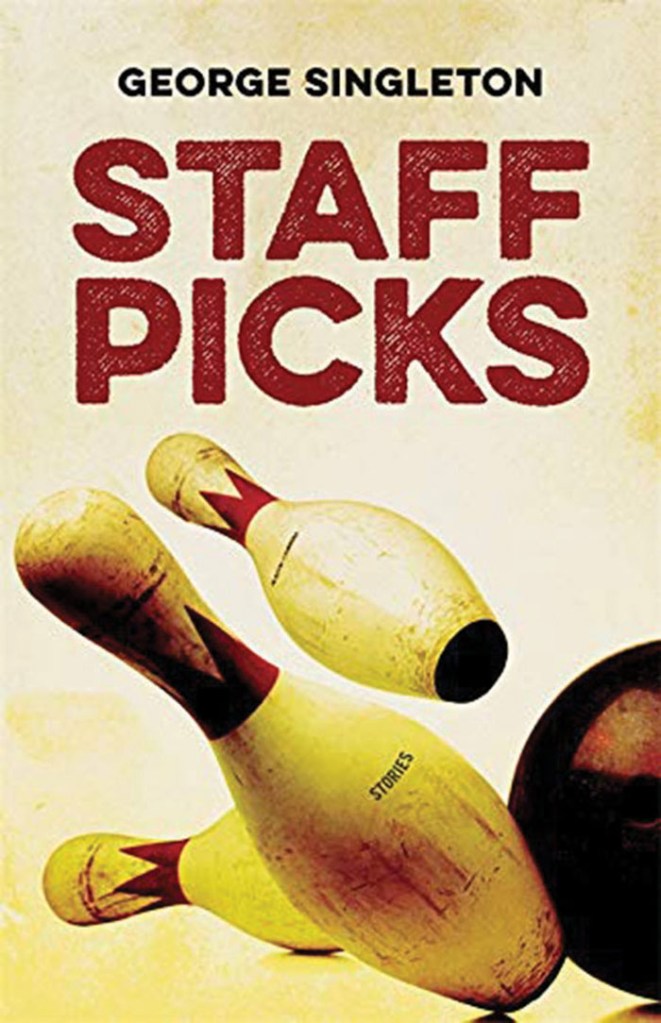 Let me say flatly, I love the way George Singleton writes. And I love his sense of humor, his skewering of his fellow persons and their weird habits, and the way his stories make me laugh, frown and talk back to the page.

I have met George a couple of times, and he’s the guy you want to get stuck with on a deserted island. The one you want to sit with at a dull dinner. The guy you hope is on the next bar stool.

George has opinions and observations about everything.

His characters in his newest short story collection, “Staff Picks,” are a bunch of sad-sack Southerners, all down on their luck, all estranged from someone or something.

They are trying to make their way in a world that likes to throw mishaps your way, or eggs at your car.

Most of the women are either as crazy as the guys or long suffering or contemptible.

It’s a crazy, mixed up world there in the hinterlands of South Carolina where George hangs out with his imaginary friends.

We’re lucky they talk to him and he writes it down to share with us.

Undoubtedly, the quirkiest story in this bevy of quirkiness is “Eclipse.” I read it twice, and I’m still wondering what was real and not.

The poor guy in this story is reduced to being a server for a local caterer. He’s slinging undercooked chicken, rubbery shrimp and questionable pork to a crowd of mental health professionals and clients, including a young man who lost his sight. Miraculously, it was restored when he looked straight at a solar eclipse.

The story starts off with our hero saying, “I might not’ve earned an associate’s degree in culinary arts from an accredited junior college, but I stood there, tongs in hand, contemplating chicken.”

Later he says, “I might not’ve earned a Ph.D. in clinical psychology from one of the better private universities on the Atlantic coast …” The theme repeats several times as the yet-to-be-named narrator describes the bizarre events in the former school gymnasium.

By the end of the story, well, you will have laughed a lot, sat with your mouth open for a few minutes and be ready to read it again.

Singleton plays no favorites. His characters are fallen in any number of ways, their struggles often a road map to failure. And Singleton pulls no punches. He sniffs an absurdity. Bang! He’s making fun of it with one of his ne’er do wells, or one of the stranger people the ne’er do wells run into.

The title story, “Staff Picks” is about something you’ve heard of before — one of those contests where people have to touch an object the longest in order to win it.

In this case, it’s an RV at a small dealership in little old fictional Steeplesburg, S.C., with a radio station, WCRS, hosting the event. The first person we meet is named Staff. “Staff’s mother had named her after a dinner plate, though Staff liked to think she was named after an entire setting or the factory over in England. Staffordshire Puckett.”

This contest takes a turn for the better, believe it or not. It’s one of the few where the odd people find each other, and for the first time in a very long time, something lovely happens to Staff.

The other women have names like Varlene or Lisette and the men, like Tobe Jobe, have sons named Odom Jobe. There’s several people named Leon, or are they all the same Leon going through his many incarnations as a preacher, a caterer’s helper, and so on?

This all takes place in nowheresville, South Carolina. In a tiny town that has lost its major employers, where Main Street is emptying and the guys who had some success are now divorced, jobless and without health insurance.

Here’s the protagonist from “Gloryland” — “If I’d not punched out my previous three bosses, I wouldn’t have fallen prey to graveyard shifts trying to block that losing Confederate anthem from my head nonstop, which I knew wouldn’t disappear entirely until my ‘security guard’ partner Dickie Land quit or died.”

The collection, “Staff Picks” has so many moments of humor, a few of pathos, a lot of smiles of recognition, it’s a book you must read.

Singleton is such a good storyteller. His language for each character sounds just right, his settings believable, even if they are odd.

If you are quick to take offense at a send-up of Southern behavior, don’t read the stories.

But if you want to spend some time with folks you just might recognize, or “have heard tell of,” spend time with George Singleton and his imagination.