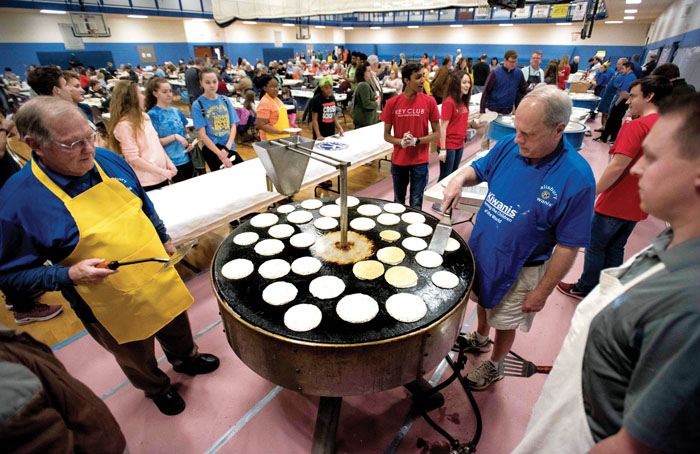 JON C. LAKEY/SALISBURY POST Richard Miller, Mike Edwards and Kyle Yoder tend to the pancakes that cook on the rotating cook surface. The annual Kiwanis Pancake Festival kicked off on Friday evening at the Hurley YMCA in Salisbury. , Salisbury, NC, 3/8/19

SALISBURY — After 62 years, you come to expect some built-in traditions, mixed in with a lot of kidding.

You had plenty of both Friday evening and Saturday morning at the annual Kiwanis Pancake Festival, which has been going on about this time of year since 1957.

Take Kiwanian Rick Eldridge, for example. He has been making coffee for the dinner or breakfast — take your pick — for about 40 years.

Then there’s club member Scott Robinson, who has been mixing pancake batter for 31 years.

Don’t forget Kiwanians such as Glenn Taylor, Richard Miller and Nan Zimmerman, all of whom know their way “around” the griddles, which by the way are circular and constantly going around.

What’s the secret to a tasty Kiwanis pancake?

Miller says good batter and a big spatula are crucial. Before flipping, you look for air bubbles all the way around on each pancake, and you want to keep the griddle on a nice, constant temperature that’s not too hot.

Talk to the Kiwanis griddle masters, and you also realize there’s an art to pulling the trigger on the over-the-griddle funnel that releases the batter.

The Kiwanis Pancake Festival, held in the J.F. Hurley YMCA’s main gymnasium, raises money for Kiwanis Charities, supporting a myriad of programs, most of which are geared toward helping youth.

And again, as tradition would have it, Kiwanis Key Club students from Salisbury, North Rowan, East Rowan and Carson high schools helped out at the pancake event, which nets more than $20,000 annually.

This year, nine K-Kids from Isenberg Elementary School, under the leadership of Karen Puckett, also donned aprons and helped Kiwanians in all the chores related to putting on the big event.

As part of Rowan County’s 49 Days of Gratitude celebration now going on, the 2019 festival allowed teachers with Rowan-Salisbury Schools to eat for free, and many teachers in the county took advantage.

The breakfast always includes pancakes, sausage, Cheerwine and coffee — and, of course, plenty of butter and syrup.

When you have a tradition such as the pancake festival, there are legacy stories to go with it.

John Cooper started accompanying his grandfather, the late Kiwanian Ray Cooper, to the pancake festival back in 1982, when John was 11.

Ray Cooper was the longtime Kiwanis king in overseeing preparation of the batter  — a cherished distinction that passed on to Robinson.

As a way of honoring his grandfather — even though he has never been a Kiwanis Club member — John Cooper returns to the festival annually to help in mixing up all the batter.

“I look forward to it every year,” he said.

Cooper lives in the same Milford Hills house his grandfather once did. Robinson points to the big mixing can and remembers Cooper having stored that can at his house for many years.

The tradition encompasses even the equipment.

Zimmerman follows a proud family tradition established by her grandfather, John Wesley Zimmerman Sr., and her daddy, John Jr., both dentists in Salisbury.

Every year, the Zimmerman men would ask a young Nan to tag along with them to the pancake festival.

“It must have been Mamma’s way to get me out of the house,” she said.

Over its history, the Kiwanis Pancake Festival has had long runs at three different places in Salisbury — first, it was the recreation building at City Park, then Salisbury Civic Center, and now the YMCA.

Robinson likes to joke that the mixing water for the City Park location came from City Lake and for the Civic Center site, from Town Creek.

“Now we use the runoff from the pool,” Robinson said. Again, he’s kidding, folks.

Buoyed by the influx of teachers coming to enjoy pancakes, the festival enjoyed good-sized crowds both Friday evening and Saturday morning, despite rain both days.

Krika Bell, a teacher’s assistant at North Rowan High, said she appreciated the gesture by Kiwanis, what the club does for the community and the chance to eat and socialize.

Back at the griddles, the Kiwanians take a lot of pride in what they produce. Sizes of the pancakes can vary, depending on the team manning each circle. And so does the number of pancakes on the griddles at any particular time.

It leads to griddle envy.

Ephraim Williams serves as student president for the K-Kids at Isenberg School.

“This is one thing we wanted to do to help the community,” Williams said Friday evening.

Another tradition has started.