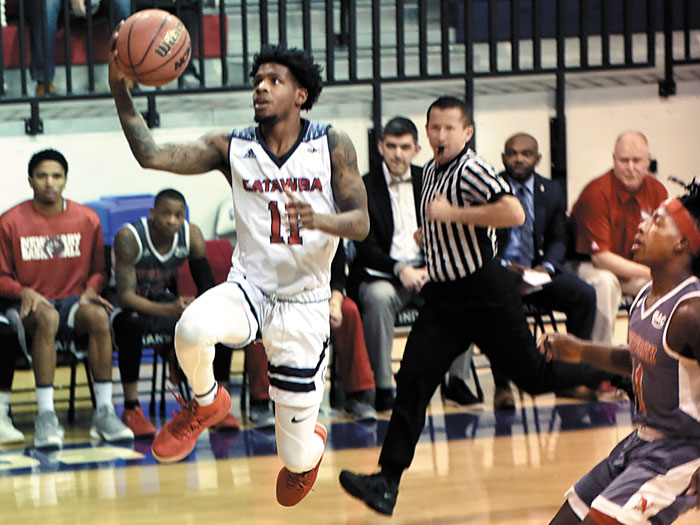 GREENVILLE, S.C — In a season filled with high-fives and fist-bumps, rock bottom for Catawba’s men’s basketball team came at Wingate on Dec. 17.

Catawba headed to Wingate 3-0 in the South Atlantic Conference and limped back to Salisbury with a 3-1 record after an eye-opening 88-74 thrashing. Malik Constantine, one of Catawba’s more reliable veterans, had more technical fouls that night (1) than points (0).

Catawba avenged the loss to Wingate on Feb. 6, putting five men in double figures for a satisfying 84-75 triumph over the Bulldogs at Goodman Gym, but now rival Wingate becomes relevant again, as the next obstacle in the way of the Indians (22-7). The teams will meet Saturday night at the 3,500-seat Timmons Center in Greenville, S.C., home of the Furman Paladins. The clash will be the second game of a SAC tournament semifinal doubleheader and will start around 7:30 p.m. Top-seeded Queens battles No. 5 seed Lenoir-Rhyne at 5 p.m.

Sixth-seeded Wingate (17-12) wasn’t supposed to be in Greenville, but the Bulldogs upset No. 3 seed Lincoln Memorial on the road in Wednesday’s first round, while second-seeded Catawba was handling No. 7 seed Anderson at Goodman Gym.

Wingate isn’t ranked in the Southeast Regional poll, so the Bulldogs obviously have to win this tournament in order to continue their season. That creates a sense of urgency.

Catawba will try to match the Bulldogs’ intensity.Ranked fourth in the region, Catawba can still make the eight-team regional even it doesn’t win the SAC tournament, but the Indians have their sights set on the automatic bid that accompanies a tournament championship.

“We’re taking the mentality that we really need to win this game,” Perron said. “Not to make the regional after the season we’ve had and the schedule we’ve played would be disappointing, to say the least. But when it comes to regional committees, you never know. Our approach is to keep as much of it in our hands as we possibly can.”

“I know our guys really want to play Queens again and to have a chance to play Queens, we have to win in the semifinals,” Perron said. “It doesn’t matter if we’re playing LMU or Wingate. They’re both very good teams.”

Catawba fell to Queens at home, 87-86, and lost at Queens, 91-87. The Indians had the lead late in both games. Queens, ranked No. 1 in the region, is favored to handle a Lenoir-Rhyne squad that is ranked seventh in the region, but the Bears were the one SAC team that did manage to beat Queens (at Queens) during the regular season.

“The SAC has been very good and very deep this year, with eight teams with winning records,” Perron said. “That’s helped us as far as our strength of schedule and that’s helped our regional ranking. And we’ve played some ranked region teams outside the league like UNC Pembroke and Francis Marion. You have an a chance to schedule a few easy wins outside the league, but we chose to schedule tough regional games instead.”

Catawba had made a sudden jump from 11-15 in 2017-18 and not even making the SAC tournament to this season’s 22-7. Several factors have been involved in that, including a return to health of team leader Jameel Taylor, a senior guard who is the SAC’s defensive player of the year and was third in the player of the year voting. Daquan Lilly, a 57-percent shooting post player, also had a return to health.

Then there are the transfers. Marcell Haskett, an extremely talented guard,  can carry the Indians when he gets hot and the second All-SAC selection also defends vigorously. Radford transfer Devin Cooper has proven to be a slick ball-handler and dependable scorer. Forward Jordan McElveen, hard-nosed and even-keeled, has been a major addition after transferring from Davis & Elkins.

“McElveen had offers from a lot of schools and we didn’t have a lot of scholarship money left to give him,” Perron said. “But he still came here because he believed this team had a chance to do something special. He’s been a big part of it. He’s been huge down the stretch, sometimes scoring, sometimes distributing, whatever we need.”

In the critical OT win against Lenoir-Rhyne late in the season, McElveen took over and scored 27 points. Taylor scored 30 against Anderson on his Senior Day.

But most of the time, Catawba wins with four, or even five, in double figures. Usually, there’s a cluster of guys scoring 14s and 17s.

Physically, Catawba is stronger and more mature than it’s been in a while. Catawba is putting grown men on the floor this season, not teen-agers. Catawba is a strong offensive-rebounding team, gets to the free-throw a line a lot, defends with some toughness, and frequently shoots 50 percent or better from the floor. In other words, this is a very stout team.

“Our recent teams have worked hard, but this one has been luckier as far as injuries and we’re obviously deeper and more talented than we’ve been,” Perron said. “I’m proud of this group. They’ve all made sacrifices to help make the team better.”

Perron had praise for several veterans who play a lot less than they did in previous seasons. Guys like senior guard Jordan Barber.

“I haven’t heard the first word of complaint from him,” Perron said. “He just shows up every day, and he’s always in the gym. Some guys who played heavy minutes for us last year are our scout team now, and there have been times when they’ve run our opponents’ stuff in practice better than our opponents run it in the games. Those guys and their contributions have been important for us. Team chemistry has been good. Of course, winning takes care of a lot of things, and we’ve been winning.”

Constantine, a talented forward with an inside-out game, has a torn meniscus, but has continued to play through it and will have surgery once the season is over. Ben Zemonek, a skilled forward who transferred from L-R, has been limited by a wrist injury but has been improving. Lilly has battled through back issues, but he’ll be ready to go in Greenville.

“We’re about as healthy right now as we’ve been since the season started,” Perron said. “Wingate is a local rival. We know them and they know us. It should be an exciting game.”