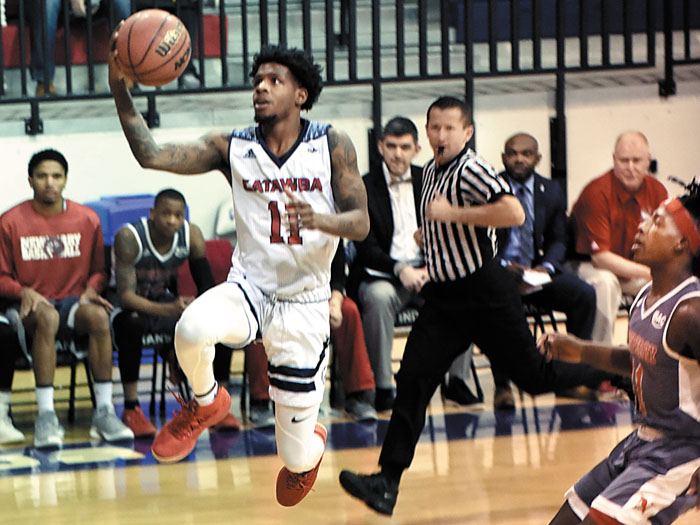 Hinshaw file photo/for the Post ... Catawba’s Marcell Haskett (11) shoots during an earlier game this season against Newberry. Haskett led Catawba past Wingate, 76-74, in the SAC Tournament semifinals on Saturday evening in Greenville, S.C.

GREENVILLE, S.C.  — It was a strange ending, with neither team able to score in the final 1:48, but Catawba’s men’s basketball team held on to beat Wingate in a South Atlantic Conference semifinal matchup on Saturday night.

Catawba’s 76-74 victory put the Indians in the tournament championship game for the first time since 2010. The second-seeded Indians (23-7) will take on fifth-seeded Lenoir-Rhyne today at 4:00, at Timmons Arena on the Furman University campus. L-R had its best shooting game of the season (63.5 percent) and knocked off top-seeded Queens in the earlier game on Saturday.

Jordan McElveen’s tie-breaking dunk with 1:48 left stood up for the Indians, as Catawba got stops on Wingate’s last four possessions.

Marcell Haskett made a steal with 10 seconds left. Haskett missed a one-and-one free throw, but Devin Cooper was able to slap the ball out of bounds on Wingate’s driving layup attempt in the final second (:0.4). Wingate got off a 3-point shot at the buzzer, but Jaren Cottingham missed.

Catawba dominated the first half behind Malik Constantine, who made all five of his field-goal attempts. Catawba led by as many as 17 points and used a Jeremy McLaughlin layup at the buzzer to take a 34-23 lead into the break.

But Wingate (17-13) started cutting into Catawba’s lead as the second half got under way.

Catawba slid down by four points, but regained the lead at 67-66 on a 3-pointer by Haskett with 6:37 remaining.

It was 69-all when McElveen made a 3-pointer with 3:55 left to put Catawba ahead.

Constantine dunked for a two-point lead with 2:37 remaining, but Frankie Johnson’s layup got Wingate even again at the 2:11 mark.

Then McElveen’s dunk  provided the final points of the game.

Catawba shot 49.2 percent from the field, but was only 7-for-24 from 3-point range. Haskett, Catawba’s chief long-range threat, was 2-for-7.

Catawba out-rebounded the Bulldogs, 40-32, but Wingate turned it over only 10 times to Catawba’s 13 miscues.

Haskett scored 15 to lead the Indians, while Constantine had 14, and Jameel Taylor had 12, Eleven Indians played. Eight scored.

Cottingham, who was held to eight points when Catawba beat Wingate at Goodman Gym, led the Bulldogs with 22 points.