Walking with a purpose: For 68th birthday, Salisburian logs miles to raise funds for project in Honduras 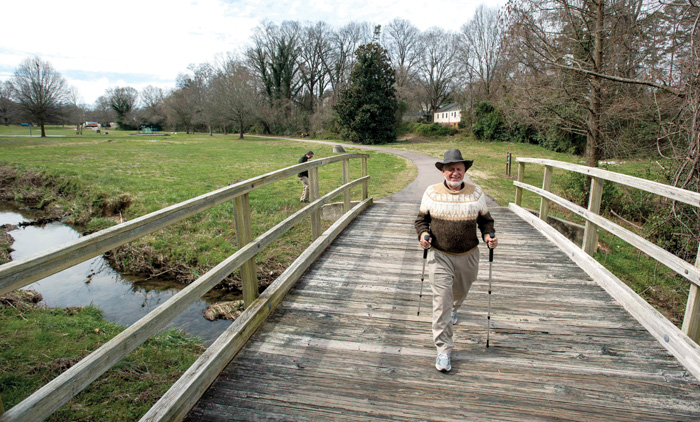 John Weaver set out on a personal campaign to raise money to build a woodworking shop in Honduras. Jon C. Lakey/Salisbury Post

SALISBURY — As he walked Thursday, first through his Milford Hills neighborhood in the early morning, then later back and forth on the Salisbury Greenway, John Weaver couldn’t hide his joyfulness.

So many times he told friends and family, “I’m having a bale of fun” or “I’m enjoying this immensely” or “It’s the walk of a lifetime.”

His favorite expression as he kept on trucking was, “I’m like Hank Snow — I’m just movin’ on.”

An app on Weaver’s smartphone kept him updated throughout the day on how many steps he had walked and how many miles he had covered.

But another number was more important for Weaver, who marks his 68th birthday today.

Businesses and individuals had pledged more than $10,000 toward what his birthday trek was all about — raising money to build a woodworking shop in Peña Blanca, Honduras.

Weaver and his wife, Anna, spend about six months of the year in Honduras, working with Christian Light Missions, for whom John is board chairman.

The mission includes a school of about 80 students, and opportunities are limited for the young men after they graduate the 10th grade, Weaver said.

With his background in woodworking, furniture and pallet-building, Weaver hopes to build the shop, purchase equipment and teach young graduates to make quality furniture.

He said he wants to give them the tools to stay in their home country, provide for their families and create jobs for others.

No matter what your politics or views on immigration, Weaver said, it all comes down to economics. The people who leave Honduras are trying foremost to establish better lives for their families.

They can make more in one hour’s work in this country than they can for a whole day in Honduras, Weaver said.

But back to his walk. Weaver wore a broad-brimmed hat, a cozy sweater of alpaca wool from Argentina, comfortable pants, wool socks and New Balance hiking shoes.

He relied on two metal walking poles, inserts for his shoes and a can of deep-tissue salve, if needed.

Weaver surprised himself when his idea for the walk drummed up support on social media and pledges came to him through Facebook posts and private messages. A company offered to match whatever individuals anted up per mile, and Weaver became happier every day leading up to the walk.

People also can donate (tax-deductible) through Christian Light Missions and its Facebook page. After all his walking was over, Weaver held his first-ever live Facebook session at 8 p.m. Thursday to update people on how the day went.

“It has really mushroomed,” he said earlier. “I got a tremendous amount of encouragement. People do relate to what I’m doing. … I got people cheering me on all the time, all over the United States.”

Weaver decided to walk the day before his birthday because the weather forecast for today wasn’t encouraging. He walks regularly to keep his Type 2 diabetes in check.

When he and Anna are living and working in Honduras, they take a 3-mile walk every morning to enjoy the beautiful country around Peña Blanca, which is about an hour south of Honduras’ second-largest city, San Pedro Sula.

As preparation for Thursday’s extra miles, Weaver took a practice hike of about 20 miles last Saturday.

He’s an early-riser. He started his walk at 4 a.m. Thursday in Milford Hills and had covered at least 10 miles by 7:30 a.m., when he stopped for a meat-and-eggs breakfast back home with Anna.

A nourished Weaver later drove to the Salisbury Greenway to continue walking, basically covering the trail that takes in the back of City Memorial Park, then continues through Forest Hills Park, crosses Mahaley Avenue, goes past Knox Middle and Overton Elementary schools, then proceeds over a couple of bridges before ending at Prescott Drive — one of the entrances to Eagle Heights.

He turned around there and headed back. The round trip is about 4 miles, and Weaver kept walking it in various segments Thursday. Anna and some of their 20 grandchildren joined him for various stretches of his journey in the afternoon, so that kept him movin’ like Hank Snow, too.

Amish by birth in Apple Creek, Ohio, and raised Amish in Juniata County, Pennsylvania, Weaver said his family was totally involved for years in woodworking — making furniture and pallets.

Here in Rowan County, he once operated the Amishcraft furniture store on U.S. 70 and still owns that building, which houses the Troyer Amish market. He and Anna have lived in Rowan for 18 years — most of that time in Woodleaf — before moving to Salisbury last August.

Weaver said he and Anna once lived in Honduras for a two-year stretch. Christian Light Missions was started in 1998 when churches in North Carolina and Pennsylvania responded to the devastation Honduras suffered from Hurricane Mitch.

For about the past 10 years, the Weavers have been making frequent trips back and forth to Peña Blanca. They’ll probably make their next trip in the spring.

“At the age we are, we can do it, as long as we can stay healthy,” Weaver said.

The couple have five children who accounted for those 20 grandchildren. John and Anna’s son Paul “P.D.” Weaver serves as secretary-treasurer for the mission. A daughter Joy works out of Colorado Springs, Colorado, for Youth With A Mission (YWAM).

After a brief pause to talk Thursday morning, John Weaver resumed his own mission of walking for his wood shop.

“I don’t feel like I’ve walked a mile,” he happily reported with 15.2 miles behind him at that point. “It gives me a good feeling.”

For more on John Weaver’s walk and how to donate toward the wood shop in Honduras, go to his Facebook page at www.facebook.com/johnanna,weaver.