Trump pays his respects to 23 killed by Alabama tornado 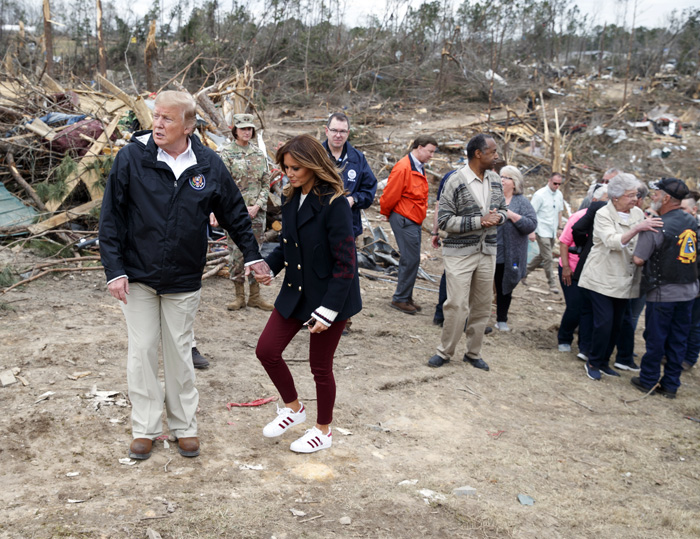 By Jill Colvin and Jay Reeves

BEAUREGARD, Ala. — His head bowed, President Donald Trump paid respects Friday to the 23 people killed when a powerful tornado roared through a rural Alabama town, observing a moment of silence before white wooden crosses that stood in remembrance of each victim.

The president and first lady Melania Trump held hands as they paused in front of each of the markers erected near a church serving as a makeshift disaster relief center for survivors of Sunday’s twister.

Earlier, the president stood on a hill overlooking a debris field and surveyed mangled trees and other wreckage.

Trump flew by airplane to a military base on the Georgia-Alabama line and boarded a helicopter that provided him with an aerial tour of the region before he arrived in Beauregard, which bore the brunt of the storm.

“We saw things that you wouldn’t believe,” Trump said after visiting a section of town where tornado winds tore houses from their foundations and uprooted trees. Mangled metal siding, wood planks and piping lay strewn on the ground, along with remnants of everyday life: items of clothing, a sofa, a bottle of Lysol cleaner and a welcome mat encrusted with dirt.

A local official had briefed Trump and the first lady as they stood outside a trailer belonging to the Federal Emergency Management Agency, which is assisting state and local response efforts.

He met with victims along the street, hearing their stories and dispensing hugs, in some case. He met privately with survivors and family members, including a woman mourning the loss of 10 relatives.

“What they’ve been through is incredible,” Trump said after he emerged from the meeting.

“I wanted to come the day it happened,” he said, adding that Gov. Kay Ivey had asked him to wait.

Before leaving the church, Trump posed for a photograph with a fifth-grader who has been volunteering there and signed the child’s Bible, said Ada Ingram, a local volunteer. Ingram said the president signed her sister’s Bible as well. He signed other items, too, including cellphones.

Chats of “USA!” broke out as Trump prepared to depart the church. He visited the nearby crosses before heading for Air Force One.

The pastor, Rusty Sowell, said the president’s visit was uplifting and will help bring attention to a community that will need a long time to recover.

“This is a marathon, not a sprint,” Sowell said.

Before Trump arrived in Beauregard, Renee Frazier stood amid bricks and lumber that used to be her mother’s home and waved as the helicopter carrying Trump passed overhead. Minutes before, Frazier had been arguing with relatives who opposed Trump’s visit, calling it more about politics than compassion.

Frazier disagreed, saying, “I want the president here to see what happened to my mom’s house. I want him right here on this land because my mom is about love and unity.”

Down the road, where several people died, Trump supporter Bobby Spann said he hoped the president learned “how to be a Southerner and how to respect people” during his brief visit.

Spann said he also hoped Trump realizes how much help is needed. The tornado had partially peeled away the roof of Spann’s mobile home.

“Houses need to be replaced. You can’t help the dead folks, but you can try to help the ones that’s still living,” said Spann, chewing on a yellowroot twig.

Trump has said he’s instructed FEMA to give Alabama “the A Plus treatment” as it recovers. The tornado that struck Beauregard was the deadliest to hit the U.S. since May 2013, when 24 people were killed by a twister in Moore, Oklahoma.

The Alabama dead included four children and a couple in their 80s, with 10 victims belonging to a single extended family. Several people in Georgia were injured by twisters that also extended to Florida and South Carolina, according to the National Weather Service.

Alabama is politically friendly territory to Trump, whose response to natural disasters at times has seemed to be influenced by the level of political support he’s received from the affected areas.

Alabama supported Trump by a wide margin in the 2016 presidential election, and he carried about 60 percent of the vote in Lee County, where Beauregard is located. Blue Trump flags flying outside homes are a frequent sight in the town.

In the months after wildfires scorched California, a Democrat-led state that voted for Hillary Clinton in 2016, Trump threatened to cut off federal aid unless the state embraced forest management policies he championed.

He also engaged in a sustained back-and-forth with lawmakers from hurricane-whipped Puerto Rico, whose pro-statehood governor identifies as a Democrat. Trump repeatedly blamed the U.S. territory for its problems and noted how much money recovery efforts had cost the federal government.

The administration at one point considered redirecting disaster aid from places like Puerto Rico and California to pay for the president’s long-promised U.S.-Mexico border wall but ultimately decided to target other funding sources.