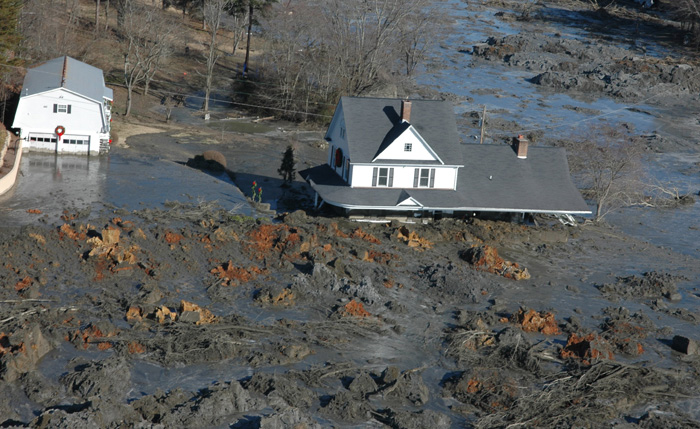 A home is engulfed near the Tennessee Valley Authority's Kingston Fossil Plant after the failure of a storage cell unleashed 5.4 million cubic yards of ash sludge near Kingston, Tenn., in December 2008. J. Miles Cary/Knoxville News Sentinel file photo via AP

NASHVILLE, Tenn. — The Tennessee Valley Authority this week defended its relationship with a contractor accused of subverting safety precautions and sickening workers during the cleanup of a massive coal ash spill.

In a Wednesday letter to two Tennessee congressmen, TVA President and CEO Bill Johnson said that to TVA’s knowledge, Jacobs Engineering Group “did not have a history of safety lawsuits or test tampering” when it was hired to oversee the cleanup.

Johnson was responding to a February letter from Republican U.S. Rep. Tim Burchett and Democratic U.S. Rep. Steve Cohen asking several questions, including what TVA knew about Jacobs’ safety record and how the utility responded to worker health complaints.

Johnson wrote that TVA “put the safety of its employees and contractors first” throughout the cleanup.
He defended the hiring of Jacobs and an ongoing contract with the company, noting that Jacobs regularly contracts on large government projects. At the same time, Johnson’s letter acknowledged that jurors found Jacobs breached its duty to the coal ash cleanup workers by failing to adhere to its contract with the utility.

Jurors in November found that Jacobs’ actions were capable of causing the workers’ medical problems, ranging from high blood pressure to cancer. According to the lawsuit, more than 40 cleanup workers have died and more than 400 are sick.

Testimony included evidence that Jacobs employees took dust masks away from workers and threatened to fire them. A supervisor also told workers they would have to consume a pound of coal ash per day before it could harm them.

The judge has ordered the parties to attempt mediation before beginning a second phase of trial, in which the injuries of individual plaintiffs would be considered.

TVA is not a party to the lawsuit, but Johnson’s letter addressed concerns that rate payers may be on the hook for the cost of some or all of the litigation. Johnson wrote that TVA’s contract with Jacobs contains indemnity provisions, but it is still to be determined whether TVA will have to pick up any of Jacobs’ legal bills.

In his letter to Cohen and Burchett, Johnson downplayed any danger posed by coal ash, noting that current Environmental Protection Agency rules call for treating it as nonhazardous waste.

Environmentalists, however, point out that although the EPA has put off a determination of whether coal ash is hazardous, the agency hasn’t deemed it nonhazardous.

Johnson also noted that TVA held weekly safety meetings during the coal ash cleanup. He wrote, “TVA is not aware of any worker complaints being handled improperly by TVA.”

A representative for Burchett said the Knoxville Republican has not yet read Johnson’s letter in depth, but his concerns about the cleanup remain. A representative for Cohen, a Memphis Democrat, was not immediately available for comment Friday afternoon.

The lawmakers’ letter also asked about the environmental impact of coal ash that is contaminating groundwater at the Allen power plant in Memphis.

Johnson wrote that tests show the contamination is not affecting the much deeper Memphis Sand Aquifer from which the city gets its drinking water. That aquifer is separated from the groundwater by a layer of clay between 30 feet and 70 feet (9 meters and 21 meters thick.

However TVA drilled wells into the aquifer to cool its natural gas plant, which is replacing its old coal-fired plant, and residents are concerned the wells will provide a route for the contaminated groundwater to reach the deeper aquifer.

TVA is the nation’s largest public utility, serving about 10 million people in parts of seven states.

Walking with a purpose: For 68th birthday, Salisburian logs…