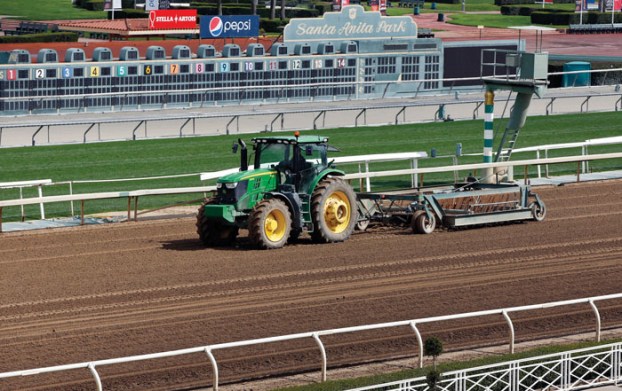 A tractor grooms the dirt track at Santa Anita Park in Arcadia, Calif., Thursday, March 7, 2019. Extensive testing of the dirt track is under way at eerily quiet Santa Anita, where the deaths of 21 thoroughbreds in two months has forced the indefinite cancellation of horse racing and thrown the workaday world of trainers, jockeys and horses into disarray. (AP Photo/Damian Dovarganes)

ARCADIA, Calif. (AP) — The dirt track at eerily quiet Santa Anita is being tested extensively after the deaths of 21 thoroughbreds in two months forced the indefinite cancellation of racing and disrupted the workaday world of horses, trainers and jockeys.

The sound of pounding hooves on the dirt was replaced Thursday by silence punctuated by the honking of two Canada geese flying over the green Art Deco grandstand.

Clockers’ Corner, the popular morning hangout for owners, trainers, jockeys and fans to watch workouts and grab breakfast, was empty save for a few people.

The stable area, usually hectic with horses moving back and forth to the track, was wide open. With nowhere to jog or gallop, horses gazed out from their stalls.

A machine moved around the mile oval under overcast skies, raking and aerating the track after heavy rain a day earlier turned the dirt into a gooey, peanut butter-like substance.

Dennis Moore, track superintendent at Del Mar and Los Alamitos in nearby Orange County, walked along the inner rail, pausing in spots to check the dirt. Moore was called in by Santa Anita’s owner, The Stronach Group, to help unravel the mystery behind what has caused the unusually high number of horse deaths.

A white van stopped at various spots around the oval with its back door open to reveal a device that mimics the impact of a horse running at full gallop, allowing engineers to see how the surface holds up. Those results will be used to evaluate the consistency and uniformity of the dirt for training and racing.

Last week, ground radar testing was done on the various layers of the dirt surface.

“It’s hard to find a smoking gun on these kind of deals,” said Joe Harper, chief executive officer of Del Mar racetrack north of San Diego. “It’s a combination of track and horse and conditions.”

In 2016, Del Mar faced a similarly harrowing situation, with the deaths of 17 horses during its summer meet. Another five died during its fall meet.

The seaside track’s surface was renovated and officials made procedural changes that led to improved safety. In 2017, there were a total of seven fatalities for both meets and four all of last year.

Although weather hasn’t been cited as a reason for Santa Anita’s woes, Southern California is experiencing an unusually wet and cold winter. The track received 11 ½ inches of rain in February when temperatures failed to reach 70 degrees (21 Celsius) on any day.

Its surface has been continuously sealed, a process in which the dirt is packed down to reduce the amount of precipitation absorbed on dry days. Conversely, on rainy days the wet track was sealed in an attempt to provide a safe and even surface.

The track’s indefinite closure has left trainers and jockeys scrambling to change plans.

Two top Kentucky Derby contenders — Game Winner and Improbable — were set to face off in the San Felipe Stakes at Santa Anita on Saturday. Instead, Hall of Fame trainer Bob Baffert will send both horses to Los Alamitos to work out on Sunday.

Plans for their next race will be decided after the workout. An option for Baffert’s duo could be the Rebel Stakes on March 16 at Oaklawn Park in Arkansas.

Richard Mandella, another Hall of Famer trainer, said he’s moved eight of his 40-horse stable to Los Alamitos to get in workouts. The others require basic training that can be done whenever Santa Anita’s inner training track reopens.

Mandella hasn’t encountered any problems with the main track since racing began Dec. 26, but he knows “something is up. I’m trying to not panic and take care of my horses.”

San Luis Rey Downs, a training center with a mile track in north San Diego County, was preparing to accept horses scheduled to race soon from Santa Anita, about 100 miles away. General manager Kevin Habell said the facility has 50 to 70 available stalls from its total of 400.

Del Mar is unlikely to take in any horses because a state-mandated water reclamation project is underway in its infield, making the dirt track unavailable for training.

Joel Rosario, who leads the jockeys’ standings at Santa Anita, is waiting to hear when racing will resume before deciding whether to relocate earlier than planned for Kentucky, agent Ron Anderson said Thursday.

Hall of Fame jockey Mike Smith was headed to New York to ride Saturday in the Gotham Stakes at Aqueduct, a key Kentucky Derby prep.

Idling highly fit thoroughbreds for long stretches is not good for them, said Mandella.

“Most of them are ready to race and if all you do is just lead them around the barn and walk them, they’ll hurt themselves just playing and acting up,” he said. “They need to do something. If you take it (racing) away, they get upset.”

Thoroughbreds in training typically are up early in the morning for a jog or timed workout in preparation for a race.

The horses return to their barn, where they are bathed and walked around for 30 minutes or so before returning to their stalls. They’ll spend the rest of the day eating, napping, getting a visit from a vet and receiving therapeutic treatment. They might also be reshod, before repeating the process the next day.

“It doesn’t take much for a sedentary lifestyle to change their whole training routine,” Harper said.

On rainy days, they may simply be walked around the barn. The 1,000-pound, high-strung animals aren’t used to being confined to their stalls day after day.

“They’re supreme athletes,” Habell said. “You’re not going to get a lot of bone density loss, but you want to keep the blood circulating and the muscles active.”