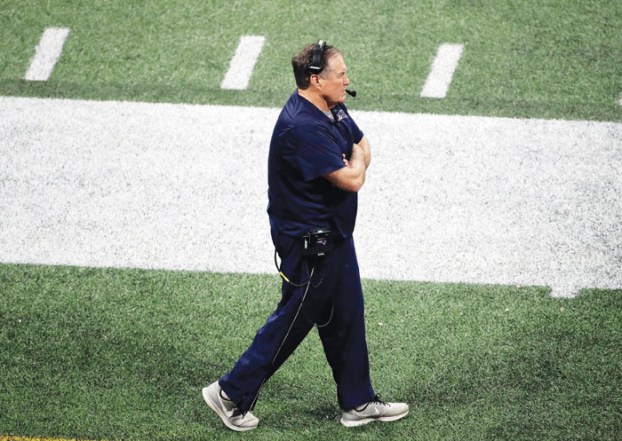 FILE - In this Feb. 3, 2019, file photo, New England Patriots coach Bill Belichick walks the sideline during the second half of the team's NFL Super Bowl 53 football game against the Los Angeles Rams in Atlanta. NFL Films produced a DVD of the Patriots' win; it was released by Cinedigm on Tuesday, March 5. Senior producer Rob Gill, a Massachusetts native, was responsible for compiling the Patriots’ season highlights as the production process ramped up after the AFC championship game. Schmidt said some of the best parts of the video are getting to hear Belichick interact with his team. “Anytime you have Belichick wired up and you can see inside the greatest dynasty in NFL history, it is interesting story telling,” he said. (AP Photo/Charlie Riedel, File)

NFL Films is no stranger to producing films commemorating a Super Bowl title for the New England Patriots. When it came time to tell the story of the Patriots’ sixth championship, they found that tying it into the past five was the best route.

The final product is a 75-minute DVD that shows how the Patriots’ road to their third title the past five years had many of the trademarks of past championship New England squads. The DVD was released to the public by Cinedigm on Tuesday.

The video starts with the final play of Super Bowl 52, when the Patriots lost to the Philadelphia Eagles, and ends with New England celebrating in Super Bowl 53.

“You are always looking for what fuels a champion and tells a great story,” said NFL Films senior producer Todd Schmidt. “They started 1-2 and everyone wrote them off, but then got momentum late in the season. That type of story is a lot of fun.”

Schmidt said the main job for the producers who work on these projects is how to use the games to tell the story of the season and the arc that the team eventually reached. For the Patriots there was the additional storyline of how does a dynasty respond to adversity?

Senior producer Rob Gill, a Massachusetts native, was responsible for compiling the Patriots’ season highlights as the production process ramped up after the AFC championship game. Schmidt said some of the best parts of the video are getting to hear coach Bill Belichick interact with his team.

“Anytime you have Belichick wired up and you can see inside the greatest dynasty in NFL history, it is interesting story telling,” he said.

Schmidt said Belichick talking to the defense during the fourth quarter of the Super Bowl, and talking plainly on what they needed to be successful, was one of the best parts about him being wired.

After the Patriots scored to take a 10-3 lead in the fourth quarter, Belichick told his defense “we don’t have much left here. We’ve got to get them right. . They really can’t beat us. We just can’t screw up.”

The Super Bowl takes up 17 minutes of the video. Schmidt, like many others, said he was concerned after the game how they were going to fill the time because there was not much scoring. But as they started to look at the footage, those concerns abated.

“You would expect a lot more larger shots, but what we did was focus on the speed and sound of the game, which was captivating. Instead of slow footage, we have fast footage,” Schmidt said. “The time passed quick because we accentuated the sound and did not slight the drama. People aren’t going to say it was a boring recap.”

Besides the Patriots’ season highlights, the DVD also includes features from Super Bowl opening night and post-game ceremonies. There are also features recapping the season around the rest of the NFL.

Little aims to make impact off bench for No. 3 Tar Heels