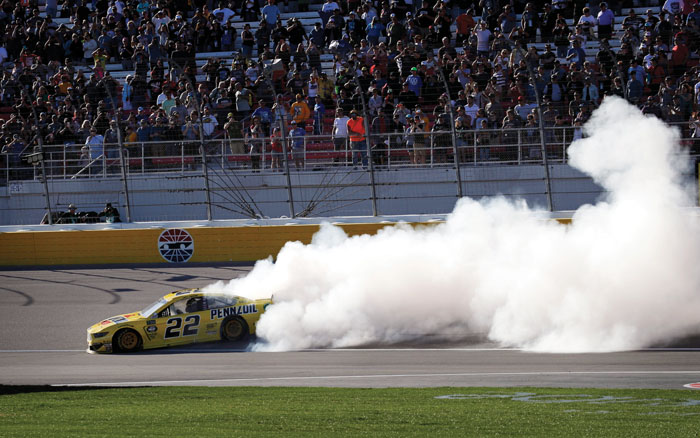 By DAVE SKRETTA AP Sports Writer
AVONDALE, Ariz. (AP) — Joey Logano was fresh off the hauler in qualifying trim at ISM Raceway when he turned a lap in his No. 22 Ford that would have landed him squarely on the pole a year ago.
With plenty of room to spare.
The first showcase of NASCAR’s new rules package on shorter tracks is taking place this weekend, and neither Logano nor anybody else seems to know what to expect. But with 750 horsepower and increased downforce, the early speed that everyone showed Friday came with a knowing nod.
“You can hustle the heck out of the car,” said Logano, who won last week at Las Vegas, one of the intermediate tracks where the Cup Series engines are held down to 550 horsepower.
“I was huffing and puffing after a couple of laps,” Logano said. “I’ve never gone around this track that fast before. I haven’t been behind another car, or ahead of another car, and I can’t tell what it’s going to be like tomorrow in practice. Just kind of unsure what it will look like.”
Same with Sunday’s race, for that matter.
“This will be one of the major track position races of the year,” said Denny Hamlin, who began his weekend on a golf course with a good omen: his second career hole-in-one. “How can your weekend go bad from that point? But you’re going to have to qualify well and have good restarts, because after that, it’s going to be extremely tough to make up a lot of positions.”
The extra horsepower means wheel spin will be an issue for the first time this season, and that has the potential to make restarts exciting. The cool weather that arrived with the teams this weekend is further boosting power.
“It was fun having the horsepower back with a lot more downforce,” said Michael McDowell, the driver of the No. 34 Ford for Front Row Motorsports. “You had to really push yourself to go fast. Just muscle memory, you’re used to lifting points and brake points. But it was fun.”
The increased horsepower also will be featured at road courses and other short tracks, and Daniel Hemric said it makes things “so much more demanding on the drivers.” That’s a welcome change for those who would rather have an opportunity to showcase their talent.
Kyle Busch won last year’s playoff race at Phoenix, and so far his Joe Gibbs Racing team has been on the leading curve in figuring out this year’s rules package. And while everyone is back to square one this weekend, after just one practice Busch already likes what he sees.
“The speed, any time you put downforce on cars, you’ll go faster,” he said. “I’m not sure what the tire difference is, (but) I feel as though the speed comes from the throttle time and the grip, and the amount of speed you’re carrying through mid-corner keeps your speeds up all around.”
___
Full AP NASCAR coverage: https://apnews.com/tag/NASCAR