Little aims to make impact off bench for No. 3 Tar Heels 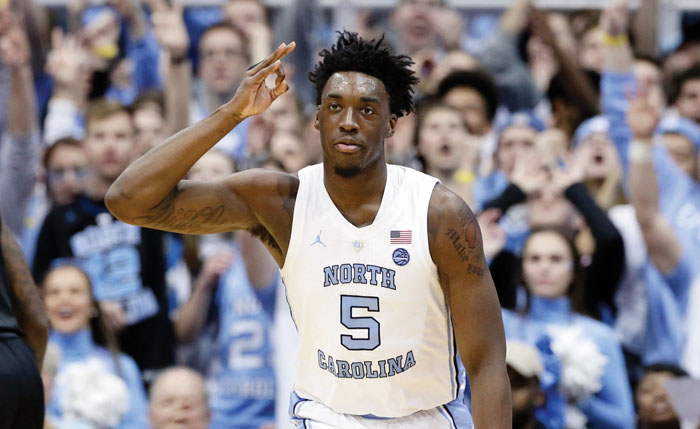 FILE - In this Jan. 21, 2019, file photo, North Carolina's Nassir Little (5) reacts following a basket against Virginia Tech during the second half of an NCAA college basketball game, in Chapel Hill, N.C. Little has carved out a role as third-ranked North Carolina's top reserve, not as a starter like many projected when he arrived on campus as one of the nation’s top freshmen. Yet Little is focusing on one stat _ wins _ for a team chasing at least a share of the Atlantic Coast Conference regular-season championship and looking like a Final Four contender. (AP Photo/Gerry Broome, File)

CHAPEL HILL (AP) — Nassir Little has carved out a role at third-ranked North Carolina: fly to the rim, attack the glass and get to the foul line.

He does it as the top reserve behind talented upperclassmen, not as a starter like many projected he would be as one of the nation’s top freshmen. But Little has said he is driven to win a national championship. And if the best way to do that is coming off the bench for the Tar Heels, he’s good with it.

“We’re winning games, that’s the formula that we have,” Little said in an interview with The Associated Press. “Everything has been working. As long as that’s happening, then I’m good with that.

“If you’re in a situation that I’m in, coming off the bench, you’ve got to take pride in that. . I’ve got to come in there and create an impact.”

The NBA prospect from Orange Park, Florida, has had those moments entering Saturday’s visit from fourth-ranked Duke. At his best, he uses his 6-foot-6, 220-pound frame to provide a jolt of athleticism and an edge unlike anyone on the roster.

There have also been games when he’s struggled to find a rhythm, hit from outside or decipher the right play as he refines his game. He’s was also banged up often in February, notably rolling an ankle to exit a loss to No. 2 Virginia after just two minutes.

“When he’s aggressive, he just brings out a different dimension on the team and opens it up for everybody else,” senior Kenny Williams said, adding: “Aggressive Nas is the best Nas.”

Little isn’t the first reserve with NBA upside during coach Roy Williams’ tenure. And if he does declare for the NBA draft after a year coming off the Tar Heels’ bench, he would hope to follow in the footsteps of Marvin Williams. In 2005 Williams never started a game for a North Carolina team that won a national championship, then became the No. 2 overall pick in the NBA draft.

Little’s NBA plans are unclear, but he would like to be like Williams and win a title.

“I want to win a national championship,” he said. “That’s something a lot of people can’t do. Only one team gets to do it.”

High expectations followed Little to Chapel Hill as the No. 2 overall recruit for Rivals and No. 6 for ESPN. It was Little — not Duke stars RJ Barrett or Zion Williamson — who was MVP of last year’s McDonald’s All-American Game with 28 points.

Yet the Tar Heels haven’t used or needed Little in a leading role. They have graduate wing Cameron Johnson (16.9 points) making himself an All-America candidate alongside senior forward Luke Maye (14.9 points, 10.3 rebounds) in the positions that are Little’s most natural playing-time fit.

Meanwhile in Durham, Barrett and Williamson have commanded headlines and highlights as the headliners in Duke’s perennial roster restock of one-and-done talent. They rank 1-2 in the ACC in scoring, even with Williamson uncertain for Saturday after missing nearly five full games with a knee sprain from last month’s loss to UNC.

Little — whose season high was 23 points against Virginia Tech —  has tried to ignore outside criticism and focus on his own expectations with the “internal competitor” telling him he can play better. Roy Williams said Little has “been absolutely phenomenal handling all that stuff” while improving his team defensive grades.

“I feel like if you pay attention to (social) media, it kind of makes you feel like you’re not doing well,” Little said. “And it’s in comparison to everything else. If you look at the guys at Duke, you look at what I’m doing, and then you’re probably be like, ‘Ah he’s not playing that well.’

“But if you compare me to a lot of freshmen in the country, I’m actually excelling, especially at a school like North Carolina that’s dominant. . We’re a top-five team in the country, and I’m a big contribution to that.”

Little struggled in the first meeting against Duke with two points in 11 minutes. But he followed with a dominating show against No. 14 Florida State with 18 points, eight rebounds and a highlight-reel dunk over 6-10 defender Mfiondu Kabengele.

Little knows more performances like it could help UNC’s pursuit of the title he covets.

“My confidence never wavers,” Little said. “My foundation is work ethic. So as long as I know I’m putting the work in, I’ve just got to live with the results. Not everything is going to come pretty. If it was easy, everybody would do it.”