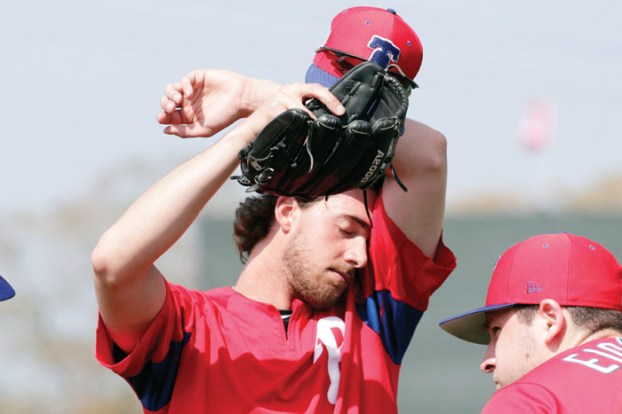 FILE - In this Feb. 19, 2019, file photo, Philadelphia Phillies starting pitcher Aaron Nola wipes his face at the Phillies spring training baseball facility, in Clearwater, Fla. It may look like a few weeks of relaxed fun in the sun, but make no mistake: Spring training can be a grind. Pitchers need to build their arms up slowly, and position players face their own challenges. At this time of year, Florida and Arizona are obviously better for baseball than many other American climates, but the warm, sunny weather does have a few drawbacks. (AP Photo/Lynne Sladky, File)

Even in nice weather, spring training can be a grind 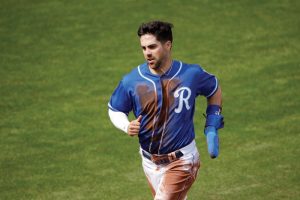 FILE – In this Feb. 25, 2019, file photo, Kansas City Royals’ Whit Merrifield runs home to score after the ball was overthrown when he stole third base during the third inning of a spring training baseball game against the Colorado Rockies, in Surprise, Ariz. Spring training is basically halfway over now, and Kansas City infielder Whit Merrifield already feels like he’s had enough.(AP Photo/Charlie Riedel, File)

LAKELAND, Fla. (AP) — Earlier this week, Detroit manager Ron Gardenhire left several of his top players out of the starting lineup. It was a rainy morning, but that wasn’t the only reason. Gardenhire said some were dealing with aches and pains.

“I talked to a number of our guys,” Gardenhire said Tuesday. “Because of these hard fields in spring training, they get little hips and groin soreness, and I just said — weather, hips and groin, that’s not good. So I just changed the whole lineup.”

It may look like a few weeks of relaxed fun in the sun, but make no mistake: Spring training can be a grind. Pitchers need to build up their arms slowly, and position players face their own challenges. At this time of year, Florida and Arizona climates obviously are better for baseball than many others, but the warm, sunny weather does have a few drawbacks.

“I wish spring training would be done, right about now — but I understand pitchers need to build their arms up and all that,” Merrifield said. “It should be three or four weeks, that’s enough. If it was me, it would start about right now and then you go into the season.”

Merrifield might be glad to see the following trends in position player workload in spring training: In 2009, Houston’s Michael Bourn led the majors in exhibition plate appearances with 107. In 2010, Julio Borbon had 97 for Texas. Last year, nobody had more than 74.

“A couple years ago, I was trying to make the team and I played in like every spring game but one,” Merrifield said. “I came into the season sore — the spring is tough in that regard — but once you get established, you get days off, play the first half a game and get out.”

Gardenhire isn’t alone in his concern about hard fields. Merrifield, whose team trains in Arizona, said “it’s like concrete out there” on hot, sunny days. New York Yankees manager Aaron Boone experienced spring training when he was a player, and now he has to monitor his team.

“At different times probably in my career, yeah, when the sun’s going and it dries out a little, it can get a little bit hard,” Boone said. “Especially as you’re building yourself up and getting used to standing out there and playing a couple hours in a game in your spikes all the time. It’s part of the buildup.”

Gardenhire was already looking beyond Tuesday’s game in Lakeland. The next day, his team was slated to play Atlanta at the Braves’ complex in Kissimmee.

“Going over to Disney, it’s a rock,” he said. “The infield is really hard over there. I don’t even want to take my players over there.”

The Tigers did indeed send a team to Disney, but Miguel Cabrera, Josh Harrison, Jordy Mercer and Jeimer Candelario — Detroit’s likely starters this year in the infield — didn’t play Wednesday.

In about three weeks, the 162-game regular season starts — with its own grueling elements. At least those games will count.

“As the time goes on here, it’s going to get harder and harder, because it starts getting really hot every day, the longer we go in spring training,” Gardenhire said. “The fields, by the end of it, your spikes don’t even dig in sometimes.”