Column: If Mark Cuban can run for president, who else? 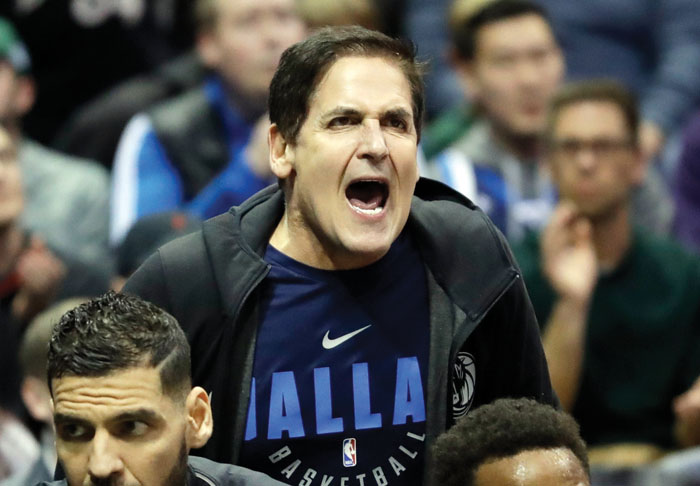 FILE - In this Dec. 8, 2017, file photo, Dallas Mavericks owner Mark Cuban yells after a technical foul during the second half of the team's NBA basketball game against the Milwaukee Bucks in Milwaukee. Cuban is talking once again about running for president and this time no one is laughing--at least publicly--at the thought. (AP Photo/Morry Gash, File)

Mark Cuban is talking once again about running for president and this time no one is laughing — at least publicly — at the thought.

After all, if a billionaire reality TV star can be elected to the highest office in the land, what’s to prevent a fellow billionaire and reality show star — and NBA team owner — from running the table in the electoral college himself?

Quite a bit, actually, if the owner of the Dallas Mavericks runs as an independent like he says he might. Presidents since the mid-1850s have been either Republicans or Democrats, and political pros say the idea of anyone winning as an independent is far-fetched, at best.

But the independent label appeals to Cuban, who believes President Donald Trump won in 2016 mostly because he wasn’t a lifetime politician.

There’s nothing new, of course, about politics and sports colliding. Trump himself once owned a team in the ill-fated USFL and tried unsuccessfully over the years to get an NFL team of his own.

Jim Bunning was a Hall of Fame pitcher for the Phillies before he became a U.S. senator from Kentucky. George H.W. Bush was captain of the Yale baseball team, and Gerald Ford was a center on the Michigan football team in the 1930s. Ronald Reagan was a sports announcer early in his career and played The Gipper in the football movie “Knute Rockne, All American.”

But what about sports figures of today, who might have name recognition but little else working in their favor. Could any of them find their way to the White House for something other than a title celebration?

Stranger things have happened, so let’s look at a few team owners — and possible future owners — who might have Oval Office aspirations:

CUBAN: Unlike many potential candidates, the Mavs owner has some experience in going up against Trump. In 2012, the two billionaires got into a Twitter exchange over donations to help victims of Superstorm Sandy and Cuban said he would donate $1 million to charity if Trump would shave his head. When Trump responded with insults, Cuban hit right back, saying he needed to do better. “This reminds me of when I used to pick on you when we were kids in Kenya,” Cuban tweeted at Trump, who was at the time challenging President Barack Obama’s birthplace.

JERRY JONES: He owns both America’s team and Roger Goodell, which by itself makes Jones an attractive candidate. But he’ll have to run on his record, and in the NFL it hasn’t been great in recent years for Jones, whose Cowboys have won only three playoff games in the last 20 years. Still, imagine the parties in the Rose Garden should he be elected.

STEVE BALLMER: With a net worth of $41 billion, the former Microsoft chief could solve a lot of the country’s problems by himself. He’s already started by founding USAFacts, which tracks data on the federal, state and local level to help politicians better understand financial issues in government. The only problem Ballmer can’t seem to figure out is how to get the Clippers in the NBA Finals.

BILL FOLEY: He’s the owner other owners love to hate. All Foley did was put the first major pro franchise in Las Vegas, then watch as his Golden Knights stormed into the Stanley Cup final in their first year of existence. After that, fixing the national debt shouldn’t be a problem.

ROBERT KRAFT: Six Super Bowl rings, two trips to a massage parlor in Florida. As long as the video never surfaces, Kraft still has a shot at the biggest ring of them all.

LEBRON JAMES: The greatest player of his generation turns 35 in December, so he’ll be eligible to run next year. James is socially active and not afraid to take a stand on issues, and by now he’s got to be looking for a new challenge after a season of dragging his underachieving Lakers teammates up and down the court. But he’s already the King, which might spark a bit of a constitutional crisis come inauguration day.

MANNY PACQUIAO: OK, he can’t be the president of the United States, but like James he’s made enough money to own a major sports team. And the sky is the limit in his native Philippines, where Pacquiao already serves as a senator while continuing his boxing career. President Duterte himself suggested at Pacquiao’s 40th birthday party in December that the boxer might succeed him as president.

And, unlike any of the others, Pacquiao actually has a chance.