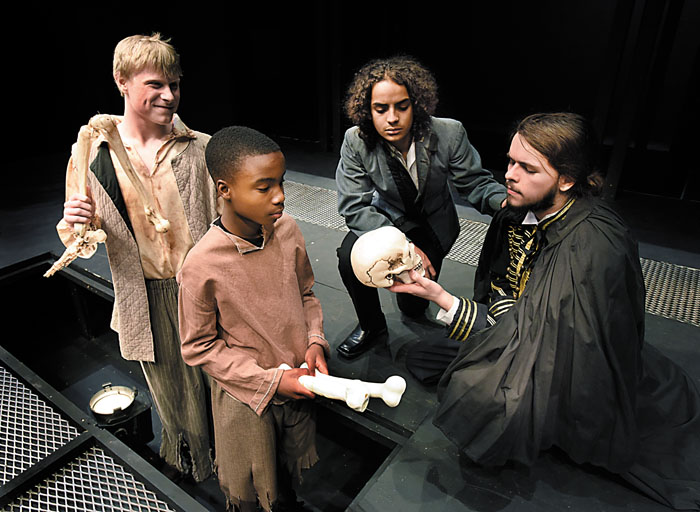 All the students are in middle and high school.

“I liked the use of the space and stage.” — Jordan

“What I liked most was costumes. They looked like they were from Denmark.” — James

“The set of ‘Hamlet’ was very interesting. Two stages were stacked on top of each other in order to make a trap door. There was also another stage used in the background as a balcony.” — Cyprus

“I enjoyed the play. I enjoyed it because of how the actors and actresses were so intense and into it. They kept me engaged and interested in the play.” — Emma

“I enjoyed the fighting because it caught my attention.” — Ivey

“I thought ‘Hamlet’ was a good Shakespeare story about love and life problems. Its dramatic scenes brought life to the play. It was a little hard to follow along at times, but once you get the whole picture it’s not so confusing.” — Gentry

“I liked how Horatio played his part. He had a hood accent. They all had good sympathy and reactions.” — Jaiden

“It was a great experience.” — Noah

“My favorite part was when the grave digger was acting like he was drowning. The actors did a really good job of being one of the characters.” — Addie

“I thought ‘Hamlet’ was great. The costumes and scenery were realistic to the time.” — Kaydence

“The performance we saw was good. The actors were extremely talented and knew their lines very well. The set was innovative and it functioned very fluently. The actors knew how to interact with each other.” — Morgan

“I think the best and most well-acted scene was the ending scene. The duel had a lot of action and passion. Hamlet was so into the play that he was, in my opinion, the best actor in the play.” — Rylan

“My favorite scene in ‘Hamlet’ was the grave-digging scene.” — Ethan

“I loved the play ‘Hamlet.’ I believe every actor in it was very talented and played their part amazing. I especially liked the actor for Hamlet. When he went crazy after talking to the Ghost, you could really tell he was crazy. Overall it was an amazing play that I would totally go see again.” — Mason

“My favorite part about the play was the fighting and the ghost/light.” — Jae

“I had several parts that I liked. One of them was the sword fight at the end. They made it look realistic and like they actually were trying to tag the other person.” — Morgan

“I wish I could go see that again because it was a very good play and everyone in it was good including the tech people and the backstage people.” — Jill

“I really enjoyed this play. It had good actors and actresses. Also, I knew some of the people performing the play.” — Ethan

“The actors spoke clearly and with emotion, and every time they spoke, they looked directly at the audience. I found it surprising that everyone had their lines memorized.” — Jada

“My favorite character was the mom of Hamlet, but the one who performed the best in my opinion was the one who played Hamlet. My favorite part was near the end when they had the fight and it got very dramatic there for a few minutes.”  — Weston