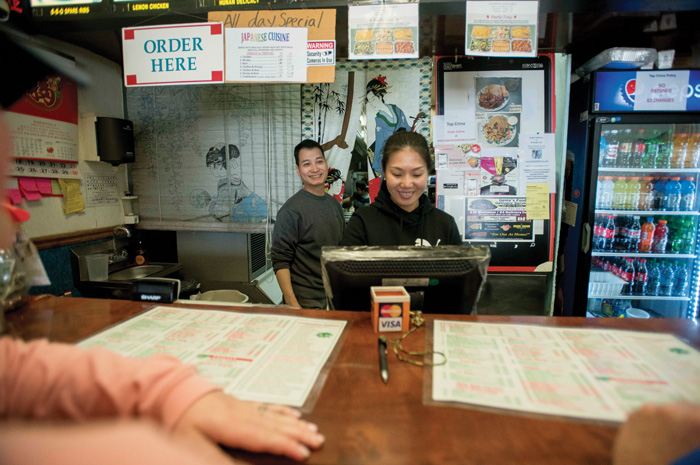 Macy Dong and her husband, David, operate the Top China restaurant in Salisbury. They recently completed the process to obtain US citizenship. Jon C. Lakey/Salisbury Post

Editor’s note: This article is the first in a series featuring new Americans. The Rowan Literacy Council assisted four local immigrants in attaining their citizenship – a lengthy and critical process. The Post will feature one of these new Americans each Thursday in March.

Mei Xue “Macy” Dong became a citizen on Dec. 13, but she’s been in the United States for 23 years. She’s happy to finally be a U.S. citizen.

“I’m so excited,” she says. “I’m like American now, and I can vote. The children are so happy; they say we are Americans. Now Lei (her husband, who goes by David) has passed. We are all so happy.”

The path to becoming a citizen was a long and arduous one for Macy.

In 1996, she immigrated to New York City, where her parents and other relatives still live. When Macy arrived in the U.S., she didn’t speak any English. She lived with an aunt and worked in restaurants in Chinatown. She learned most of her English from customers and co-workers.

“I took classes in New York for two months. It was too much. I got a few words. Mostly I learned in work,” Macy said. “When I came here to Salisbury, I was not speaking much English. That’s been 18 years. When I came here, maybe two years after, I took classes at (Rowan-Cabarrus Community College), but I did not have much time. I would try to go a few hours before work. Sometimes I would miss class. Mostly I’ve learned by talking with customers.”

Her English is pretty good now, and she’s still working on it. She says some people learn English by watching TV but she does not have time to watch TV.

Macy and David work 13 to 14 hours per day at their restaurant, Top China. The restaurant is between Lowe’s and Food Lion on Faith Road. They opened it in 2001 and were open seven days a week until recently.

“In the early days, it was tough going” David said. “We struggled just to pay the bills. Today we have more business.”

So the couple made the tough decision, just this year, to close one day a week. They had a discussion about what day to close.

The restaurant is now open Monday through Saturday.

When she does have downtime, Macy says she reads her Bible – in Chinese.

“The English is so hard,” she smiles.

She hopes to return to the library to again take advantage of the Rowan Literacy Council, which helped her with the citizenship test.

“Maybe to the library and have one-to-one, one time a week, just an hour or two.”

Macy selected her English name for its similarity to her Chinese name, which is pronounced “may-ZHOO.” Her husband, Lei Ni, selected the name David because it’s easy to say.

“Lei and I married in 2000,” he said. “Then I had Mona in New York. When Mona was 10 months old, I took her to China, to my mother, where she stayed for four years. We were starting the restaurant and working so hard.”

“We called every week,” David interjects

When Mona returned, she didn’t know any English, but she learned very quickly. Nine years later, the couple had a son, Jeff, born in Salisbury. Once again, Macy flew to China so her mother could care for him. He, too, returned at age 4 and quickly learned English.

The family attends New Life Chinese Christian Church in Kannapolis. Macy says her mother and grandmother were Christians in China before it was legal.

Macy and David say their home culture is largely Chinese.

“We speak Mandarin at home,” Macy said. “We want the children to know the language.”

They observe Chinese holidays and often eat Chinese food. “But we eat pizza and McDonald’s, too,” David says with a laugh.

When Macy decided to pursue citizenship, she went to the library and asked for help from the Rowan Literacy Council. She was assigned a tutor, Joel Scott.

“Joel is very, very nice,” Macy says. “I enjoy him. He is also funny. When we started with him, you’re not nervous. He is very friendly. From the start, we were good friends. It would have been very hard without Joel.”

Scott gives the credit back to Mona and David.

“They definitely would have made it without me. They studied hard,” Scott said. “All the credit goes to them. I gave encouragement and prompted them to go ahead and do it. It’s to the credit of their ambition and hard work that they succeed.”

Becoming a citizen is no walk in the park, Scott says. There are several steps. First there is a 29-page questionnaire requiring every address the person has lived at in the U.S. as well as every job and phone number. And “all the people you know,” Scott said.

He said vocabulary alone in the questionnaire is challenging.

“It asks, for example, if you’ve ever committed genocide,” Scott said. “If you guessed and said, ‘Yes,’ you’d be in trouble. If English is not your first language, it would be quite a challenge.”

For the test, applicants must learn the answers to 100 questions. They’ll be asked 10 of those 100 at the time of application and must get at least six answers correctly. Some questions, Scott said, are easy, such as “What ocean borders the U.S. on the east?” Others, he said, are tough, such as “Who wrote the Federalist Papers?”

It costs about $900 to apply for citizenship. Applicants get two tries. If the applicant is not successful after two tries, he or she must repay the fee to try again.

When Macy was sworn in as a citizen, Scott was right there with her.

“It was a very formal ceremony,” he said. “There were about 75 people from 38 different countries. It was very exciting.”

David was tutored by Scott, too, and was sworn in Tuesday. Now, everyone in the family is an American citizen.

In an interview, Macy looked to the future for just a moment.

“I want to get the children through college. I want them to have a good job – one where they can take care of themselves. I’d like to see them get married,” she said. “When they have finally finished college, and have a job and take care of yourself, then you can have babies. Step by step.

“We work so many hours. I would hope my children do not have to work as hard as we do.”

Fundraiser set up for family of infant killed in…