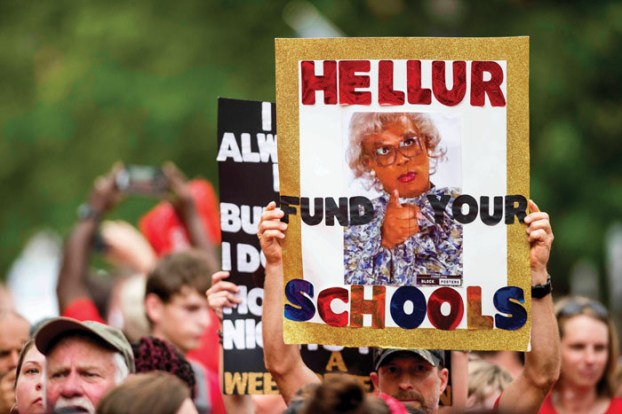 Teachers and public school supporters rallied in the state capital on in May 2018 to make a unified stand in regards to state funding for education. Jon C. Lakey/Salisbury Post

RALEIGH — In any human enterprise as complex, varied, and challenging as education, we shouldn’t expect a great deal of consensus, much less unanimity. Politicians, educators, parents and citizens debate education policy constantly, not only because it is of crucial importance to our shared futures, but also because the field simply contains many highly debatable questions.

Whether paying teachers extra if they obtain graduate degrees will make them more effective is not among those debatable questions — at least not any more. In the vast majority of cases, the answer is “no.” Pay bumps for teachers with graduate degrees is cost-ineffective. If you seek to improve student learning, such as policy isn’t worth pursuing.

Over the past three decades, scholars have published more than 100 studies in peer-reviewed academic journals testing the proposition that possessing a graduate degree makes one a better teacher, all other things being held equal. In more than 80 percent of the empirical studies, researchers found no relationship between graduate degrees and measurable teacher effectiveness.

Of course, that does leave room for a few studies finding a positive association (as well as a few finding a negative one). Even for the positive studies, though, the finding is often narrow. There is a handful of studies showing that when teachers possess graduate degrees in the subject they teach, rather than in education, their students may benefit. But this evidence has mostly to do with graduate-level mastery of math or science, not with degrees in any and all subjects.

In a rare and praiseworthy occurrence of evidence-based policymaking, the North Carolina General Assembly decided several years ago to end the state’s pay supplements for graduate degrees. Lawmakers decided instead to reform the teacher-salary schedule so that pay rose with gains in teaching effectiveness, which occur disproportionately in the early years of a teaching career, while also offering bonuses for exceptional performance.

In addition, an increasing number of North Carolina school districts are pursuing the flexibility to adopt new compensation systems that pay teachers more for assuming advanced teaching roles. We may also see greater differentiation as teachers get paid more based on hard-to-staff subjects and hard-to-staff schools, although political resistance to such common-sense practices — which are common in other professions — remains significant.

As North Carolina and other states continue to iterate and innovate, some promising teacher-pay reforms will pay off. Others may prove ineffective or even counterproductive. Policymakers should always be willing to subject their ideas to evaluation in real-world settings, which are inherently more complex than the models they use to craft legislation.

Does that principle sound reasonable? If you think so, keep in mind that you are obligated to apply the principle consistently. If you pounce on every adverse finding to savage an education policy you dislike, yet insist that North Carolina restore pay supplements for graduate degrees because “it just makes common sense,” you are being grossly inconsistent.

But what about that narrow finding about students benefitting from teachers with advanced math or science degrees? Couldn’t North Carolina reinstate pay bumps for those special cases?

In theory, yes. In practice, it’s neither necessary nor workable. It’s unnecessary because if obtaining such a degree will improve teacher performance, we can capture the effect of that by rewarding the performance itself — measured however you like, by value-added test scores or principal evaluation or student surveys or some combination — rather than the acquisition of the degree.

Moreover, the distinction will never stick. When a few state lawmakers filed a bill this year to restore the pay bump, they extended it to all academic subjects. The North Carolina Association of Educators then welcomed the bill only as a first step to restoring the supplement for all graduate degrees, including those in education (which represent a large majority of the degrees at issue).

Restoring pay bumps for graduate degrees would be a triumph of special-interest pressure over sound policy, of image over substance, of hope over experience.

John Hood is chairman of the John Locke Foundation and appears on “NC Spin,” broadcast statewide at 7:30 p.m. Fridays and at 12:30 p.m. Sundays on UNC-TV.

By Tim Williams For 91 years, teachers, many of whom were residents of Faith, nurtured, mentored, encouraged, loved and taught... read more