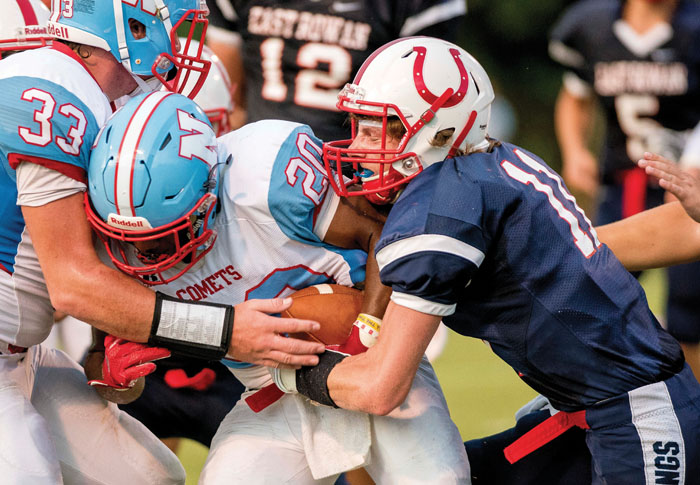 The excitement of Division II football has returned to Barton in Wilson, N.C., where the last season of competition was in 1950. Hester is the man in charge of getting a new program started from scratch.

Barton’s opening game will come in 2020 against the always talented Newberry Wolves. The second game for Barton’s Bulldogs will be storybook stuff. It will be against Catawba in Salisbury.

“We’re not just dipping a toe into the wading pool,” Hester said with a deep breath. “We’re diving into the deep end head-first.”
Hester isn’t interested in drowning, so his first signing class — 40 athletes so far — needed to include special people. Hester believes one of those special people will be East Rowan receiver Gabe Hinceman.

“With the huge challenge that’s in front of us,  the first thing we had to look for was high-character folks with great academics,” Hester said. “You have to get those right people first, and then you hope a lot of those people become really good football players for you.”

Hinceman is a good football player. He’s a versatile throwback sort of athlete who did a lot of different things for East’s Mustangs. He kicked field goals and PATs, caught a lot of passes and started in the defensive secondary. With four touchdowns, 21 PATs and six field goals, he ranked seventh in scoring in Rowan County as a senior with 63 points. He caught 28 passes for 460 yards as a senior.

“He didn’t come off the field for us,” East head coach John Fitz said. “He was a leader in our program since his sophomore year, and he’s also an exceptionally good student. Believe me, if they were all like him, you wouldn’t have any problems. We’re glad to see Gabe going with Chip Hester because they don’t come any better than Chip.”

Hinceman’s father, Lonnie, was an outstanding wrestler in his high school days at East. He was state runner-up in 1992.

Lonnie got Gabe involved with wrestling early, and while it didn’t turn out to be the sport for him, it taught him discipline and sportsmanship early in life. Wrestlers try to tear each other’s heads off in controlled combat in a confined space, but then they shake hands when it’s over. Gabe lost matches, but he learned from it.

Basketball was next for Gabe. He excelled at it and he loved it.

“The dream for me became playing college basketball,” Gabe said. “I played on really good AAU teams every summer.”

Many of Gabe’s AAU teammates now form the core of the North Rowan squad that has advanced to the 1A regional final.

Gabe became a three-year basketball starter for East and had a strong senior year as the Mustangs’ point guard, averaging 10 points and 5 assists.

He’s certainly built for basketball. He’s not skinny, but he’s lean at 6-foot-3 and about 180 pounds.

When all the Rowan schools got together for a football jamboree at West Rowan last August, Hester was in attendance. He did a double-take when he saw Hinceman, a kid who had grown up in the same church as Hester’s daughters. The kid had gotten a lot bigger.

“Is that really Gabe?” Hester asked Lonnie Hinceman. Lonnie assured him that it was.

“It wasn’t until my senior year that football became the sport I was going to play in college,” Gabe said. “About midway through my senior season, Coach Fitz called me in and told me Coach Hester was really interested in me being part of Barton’s first recruiting class. I started looking at it as a great opportunity.”

Gabe visited the Barton campus, liked what he saw, and made his decision in February.

Barton’s entire recruiting class will redshirt in 2019. The team will practice, but it won’t play any games. Every recruit will be in the same boat.

“I think it’s a perfect situation for Gabe,” Fitz said. “That redshirt year is going to give him a chance to add some weight and some strength and to work on his speed. He’s got the work ethic and the frame to take on more size.”

Hinceman, first team all-county in football the last two seasons, had long touchdown catches in East’s two most memorable wins last fall, unexpected victories over South Iredell and North Stanly. There was plenty of solid film for Hester to examine.

“He’s got those football instincts you love to see,” Hester said. “He understands high-pointing the football. He’s got really good hands.”

Hinceman plans to major in business administration at Barton. He also is likely to take computer science courses at Wilson Community College for a minor.

He doesn’t compete in a spring sport, so he’ll be spending the rest of this school year with weight lifting and conditioning drills. For the first time in his life, he’s preparing to be a full-time football player.

“Football is not the path I expected to take,” Gabe said. “But I couldn’t be more excited about how things turned out.”

NOTES: Barton landed several recruits from Cabarrus County, including A.L. Brown defensive end Darion Lott (6-2, 240). Also signing with Barton were North Stanly QB Bailey Baker and Mallard Creek receiver Jadyn Washington, who has a quarterback background and could return to QB at Barton. “We got some special athletes and we also got a lot of big linemen.” Hester said. … East linebacker Christian Bennett, Rowan’s defensive player of the year, hasn’t made a decision yet, but Barton is one of the schools that has offered.