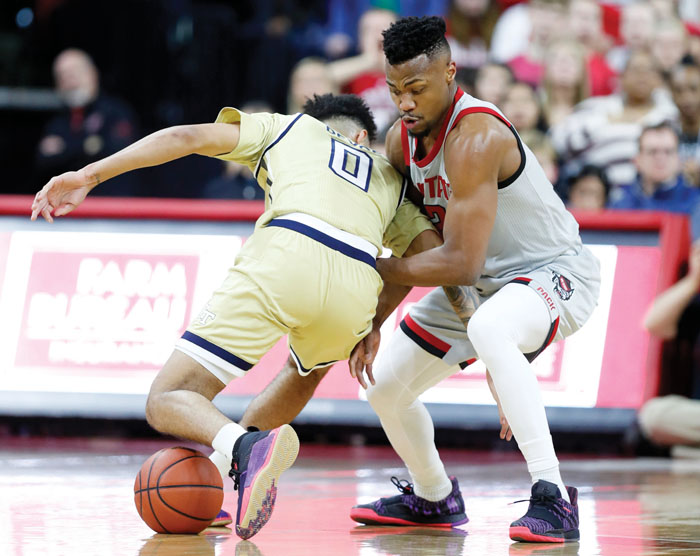 RALEIGH (AP) — Jose Alvarado raced the length of the court and passed to James Banks III for a go-ahead, two-handed dunk as Banks was fouled with one second remaining and Georgia Tech stunned N.C. State, 63-61, at PNC Arena on Wednesday night.

Banks, who led the Yellow Jackets with 19 points, added a free throw for a three-point play and the two-point lead. N.C. State’s inbounds pass traveled the length of the floor to C.J. Bryce, but his jump shot from the top of the key glanced off the side of the rim.

Torin Dorn had capped a furious N.C. State comeback from an eight-point deficit with a 3-pointer from the wing with 5.5 seconds remaining before Alvarado rushed up the court to find Banks for the winning basket.

Georgia Tech broke open a close game when Wright sank a 3-pointer from the wing and Alvarado followed with a drive for a 3-point play after breaking N.C. State’s full-court pressure defense to lead 52-44 with 8:06 remaining.

The late scoring binge by Johnson, who poured in 12 points in 3 ½ minutes, gave the Wolfpack a chance, but it wasn’t enough.

Georgia Tech: Winning three of the last five games was a good way to finish the regular season after previously suffering through a seven-game losing streak. Posting its first win away from home since Jan. 12 should give the Yellow Jackets some optimism and confidence heading into the ACC Tournament.

N.C. State: A heartbreaking loss is the last thing the Wolfpack needed after entering the game with four wins in their previous six games. N.C. State needs a win in its regular-season finale to finish with a .500 ACC record.

Georgia Tech: Has the weekend off before meeting an opponent to be determined Tuesday in the ACC Tournament.