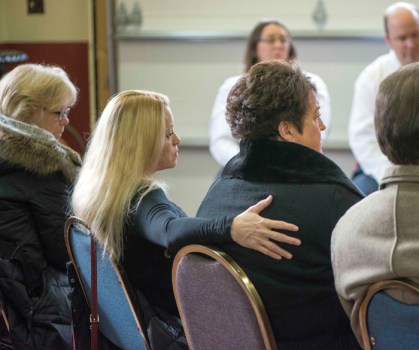 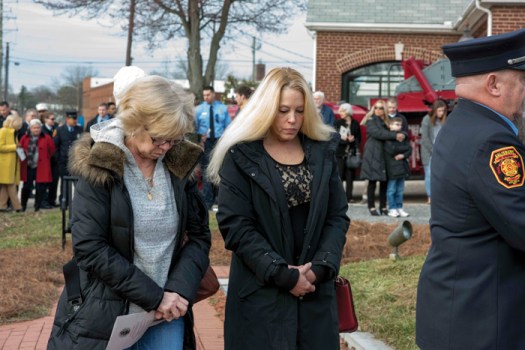 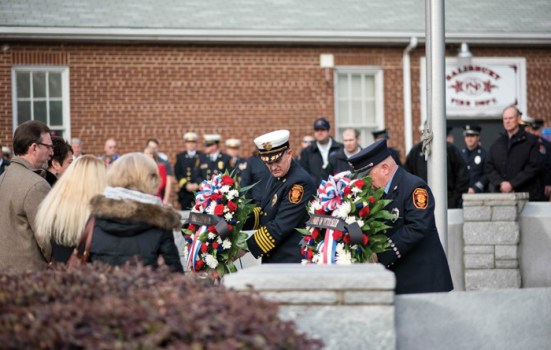 The sisters attended a remembrance service Thursday to honor Isler, who died on March 7, 2008, fighting a fire at Salisbury Millworks alongside 19-year-old Justin Monroe, also a firefighter who died that day.

It had been years since Linda Isler attended the annual service. Langdon said she’s never been able to handle the emotions of attending until Thursday.

Lisa Monroe, the mother of Justin Monroe, and her brothers — Walter and Randy Ferrell — also attended, as did other family members.

Justin Monroe and Vic Isler died while battling the biggest fire in the city’s recent history. Dozens of local and regional firefighters responded to help fight the blaze. Isler and Monroe were trapped inside the building when a firewall collapsed.

Fire Capt. Rick Barkley, who was not far from the two firefighters that night, was seriously injured. He survived in part because he placed himself on top of a fire hose that had a hole. When a fire rescue team found Barkley, he was surrounded by a pool of water.

Barkley was the one who issued a mayday alert to other firefighters outside the building, which led to the rescue of himself and others.

“It’s been very hard to be here. She’s a little bit stronger,” Langdon said, pointing to her sister. “I have gotten better, but it’s not been easy.”

Linda Isler recalled a time when the family would take Vic to the firehouse in their native New York when he was a child. They knew early on he wanted to be a firefighter.

Vic Isler, 40, was a volunteer in Long Island for many years and worked for the New York Fire Department as an EMT. He assisted at Ground Zero after the terrorist attacks of Sept. 11.

Linda Isler said she and Vic studied to be EMTs together. He was serious about becoming an EMT, but he always studied with a steak and beer, she said with a laugh.

He was too old to become a firefighter in New York.

“He was heartbroken,” Langdon said when he learned that his age would prevent him from joining the New York department.

But Vic had found a program farther south that would accept him.

The sisters said when Vic told them he was moving to North Carolina, partially because of his love of NASCAR, they knew he’d be able to fulfill his dream of becoming a professional firefighter.

It gets tough to relive the day he died, the sisters said.

“He was a good soul,” Langdon said.

The women said they are appreciative of the support from the local firefighting family and the community. They also expressed their love for Lisa Monroe and her family.

“They keep him alive for us,” Linda Isler said. “We may have lost a brother, but we gained a new family.”

The sisters said it’s admirable that first responders risk their lives to save others.

“He died doing what he loved,” Langdon said.

Lisa Monroe said the support means so much to her and her family.

Monroe said she knows her son is in heaven.

She said she’s appreciative every day that people remember her son and come to show support each year.

“It’s a wonderful thing that we gather to remember them every year because we should never forget their sacrifice and the sacrifice of the families,” said Salisbury Mayor Al Heggins.

She told the Isler and Monroe families that the community supports them in their loss and is always here for them.

Fire Chief Bob Parnell said his firefighters continue to struggle to make sense of it all.

“In a community, the whole city, thousands who stopped and watched and honored and revered two heroes that died in service to the community. The days are ones that I will and many will never forget,” Parnell said.

He mentioned a fire department in Maine that is likely going through the same pain, disbelief and confusion after a firefighter was lost in an “untamed fire.”

He thanked the families for their steadfast love and support.

He said he remembers vividly the people who stood in support after the 2008 fire, the letters from the community, the response of regional fire personnel, as well as the support from chaplains and city and county leaders.

“We honor them. We honor their families for their sacrifices,” Parnell said.

Chaplain Tom Barnette said Thursday was a day to remember Isler and Monroe, “who gave as Abraham Lincoln so eloquently said, ‘the last full measure of devotion.'”

Responders are there for those in need today and beyond, and they put themselves in danger to serve the public.

“And so, Lord, I pray for them today, as well. Thank you for the opportunity to remember,” Barnette said in prayer.

Chaplain Kris Mares asked in her closing prayer that the Lord to bless the men and women who devote themselves to others.

“Grant them courage when they are afraid, wisdom when they make quick decisions, strength when they are weary and compassion in all their work. When the alarm sounds and they are called to aid both friend and stranger, let them faithfully serve you and their neighbor,” Mares said.

Firefighters Isler and Monroe were honored last year when the city named the new Salisbury Fire Station No. 6 in their honor. The station will be built on 6 acres on Cedar Springs Road.