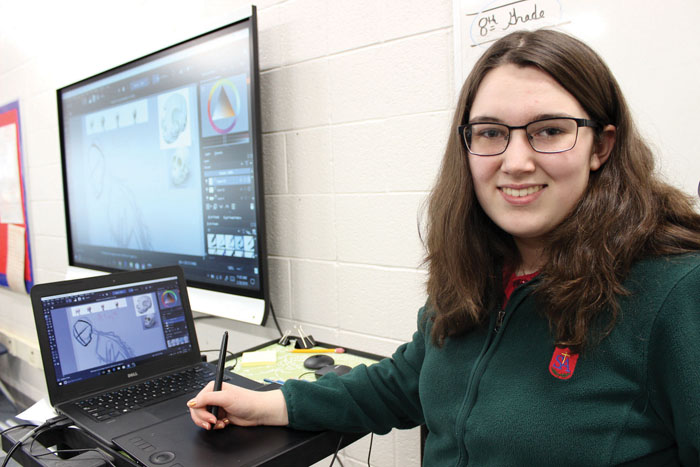 SALISBURY — Elsie Richter is creating her own masterpiece by helping her peers create works of art.

An eighth-grader at Salisbury Academy, Elsie had a bright idea in one of her middle school elective classes, called exploratories, last year.

“I remember it hit me, and I said, ‘Hey, what if I led my own exploratory?’” Elsie says.

After sharing the idea with the middle school division director and getting approval on her concepts, Elsie’s class began to take shape. Coding and programming are passions of Elsie, so she first considered the idea of teaching computer animation before settling on the topic of mixed-media art.

Exploratories at Salisbury Academy change each quarter and are offered to students in fifth through eighth grades as an opportunity to explore new ideas and areas of interest on a weekly basis. This year’s exploratories have covered topics such as yoga, running club, local history and calligraphy.

Elsie is seven weeks into her 10-week exploratory. She says that teaching her fellow students has been a fun and interesting experience.

“We all have something we can laugh at together, and it’s easy to connect with them. If someone’s having trouble, I know how to show them through it.”

“Elsie has been prepared and organized and has so naturally garnered the attention and respect of her peers,” says Margaret Hattaway, teacher liaison for the exploratory.

Along with teaching her how to write a syllabus and prepare lesson plans, Elsie says the experience has shown her that to teach is, in itself, to learn. Her watercolor lesson, for example, brought with it a few surprises.

“We had just enough watercolor palates but not enough brushes, so that was a bit of a flop,” says Elsie. “Also, my classmates didn’t like the fact that the paints spread everywhere.”

Other lessons learned have included how to give constructive criticism and technique suggestions without stifling students’ confidence and excitement for art.

The highlight of her teaching experience has been uncovering her fellow students’ talents and interests in the arts, Elsie says.

“This class has actually been very surprising for me because in a lot of my classmates I saw talent that I didn’t know they had. And I think they didn’t even know they had it,” says Elsie. “That has been a joy, definitely.”

Over the final three weeks of her exploratory, Elsie’s mixed-media students will work on personal projects — their masterpieces. Each student will choose a medium to create the artwork, from pen-and-ink, to watercolor, to digital drawing, to charcoal.

“I’m hoping they get the feeling of this being their big masterpiece,” says Elsie.

Observing from the back of the room as Elsie leads a class full of attentive students, Hattaway says the exploratory has been enjoyable to watch and support.

“Elsie is sharing her passion,” says Hattaway. “This has been a real thrill for her and an engaging learning experience for all involved, both Elsie and her peers,” she says.