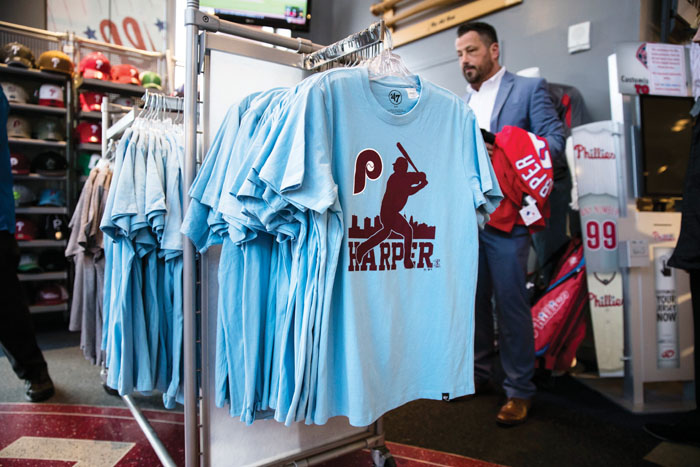 PHILADELPHIA (AP) — Bryce Harper swag is going, going and just about gone before he takes a swing in Philadelphia.

Phillies merchandise stores and ticket vendors are certainly getting their hefty cuts thanks to Harper hype.

Harper has Phillies fans spending stupid money on his No. 3 jerseys, tees and caps, and the franchise has set records with ticket sales headed into the March 28 opener.

When Harper looks in the stands on opening day — and over the remainder of his record $330 million, 13-year deal — he’ll see thousands of fans wearing his jersey.

Fanatics said Harper’s No. 3 Phillies jersey was the all-time best-seller for any athlete during the first 24 hours of launch. Aramark, which manages the Phillies New Era Team Store at the ballpark, said “interest is high and sales are brisk” and new waves of merchandise arrive daily. MLBShop.com offered free shipping on all U.S. orders over $39 — a walk in the park for fans buying the $119 Harper batting practice waffle pullover hoodie or $44.99 for the Harper toddler official cool base player jersey.

How’s this for a sign that Harper Mania has come out of left field? A notice was posted on the team store this week the store ran out of letters and did “not have any more R’s for Adult Home and Road Jerseys .”

The die-hards haven’t balked at the $145 jerseys and $35 T-shirts and shoppers are leaving with the bags full. One fan even sold the first Topps Bryce Harper Phillies baseball card for $199.99 on eBay — no stale stick of gum included.

Fanatics, an online retailer, declined to reveal sales numbers but said New York Yankees slugger Aaron Judge was the top seller last season and Harper, wearing No. 34 for the Washington Nationals, was 12th.

Harper already is a hit on the field,  with a home run Wednesday in his first scrimmage with the Phillies.

Harper could make a case for MVP to stand for Most Valuable Purchase.

The Phillies once had the toughest ticket in baseball shortly after Citizens Bank Park opened in 2004 and the franchise set an NL record with 257 straight sellouts from 2009-12. The Phillies drew 3,777,322 fans in 2010 but failed to reach 2 million in any season from 2015-17. They were in the playoff hunt until August last season and drew 2,158,124 fans, though tickets flooded the secondary market at less than $10 a pop.

The Bryce Boon has formed old-school lines at the ticket window.

John Weber, the Phillies senior vice president of ticket operations, said the team sold 100,000 tickets last Thursday when the team signed Harper and another 80,000 tickets the next day. The Phillies sold 50,000 tickets over Saturday and Sunday and 45,000 more on Monday. Philadelphia sells face value tickets ranging from $20 to $140 — but opening day tickets started at $103 (before fees) Wednesday on StubHub.

Weber said full season ticket equivalents have jumped from 9,500 to 12,300, thanks to the additions of Harper and four other All-Stars.

“You hope you have a price that is fair for the ups and downs as best you can,” Weber said. “It’s not perfect. But we’re not raising prices $20, $30 dollars. Let’s get our fans here and let them enjoy the game as we move forward.”

Marsha Zisling, of Valley Forge, Pennsylvania, was a season ticket holder during the World Series seasons and gave them up once the team bottomed out in the NL East. Zisling held a shopping bag with a Harper authentic jersey as she stood in line this week at the ticket window and browsed potential dates. She even tuned into to a local sports radio station on the way to the park because she knew Harper would be a guest on the show.

“It’s just been an exciting time to finally have enthusiasm about the Phillies,” she said. “He was just on the radio, and I swear I started to cry listening to him. He’s just so genuine and really sincere about coming here and making the city his home.”

Nancy Hatfield, of Philadelphia, said Phillies outfielder Andrew McCutchen was actually her favorite player but she had to splurge on Harper merchandise. She held a couple of Harper T-shirts on her stop at the stadium to pick up her tickets. Hatfield has been a season ticket holder since 1996 and said Harper has energized the fanbase perhaps even more than the Ryan Howard-Chase Utley-Jimmy Rollins glory years.

“We’ve been waiting for something good to happen,” she said. “Now we just hope he doesn’t get injured. That’s the Philly Curse. It’s been sad, all the empty seats the last couple of years.”

Not everyone is on board with Harper’s arrival.

Let’s check in with Elias, the guitar-strumming WWE bad guy, of course, and not the source of baseball statistics and historical data.

The fans erupted in boos toward anyone who would dare slander their newest All-Star. Many fans were already wearing No. 3 T-shirts.

But Phillies fans may want to slow the spending spree and save some of their cash for a rainy day.

After all, Mike Trout is a free agent in two years .

BOSTON (AP) — Major League Baseball is investigating whether new Philadelphia slugger Bryce Harper committed a tampering violation when he lobbied for Mike Trout, who isn’t a free agent for two more seasons, to join the Phillies.

Speaking to a group of Boston business executives on Wednesday, commissioner Rob Manfred said he doesn’t want players recruiting other players, a practice that has been winked at in the NBA. Manfred said he didn’t want to see the same thing happen in baseball.

“Given our rules, players recruiting other players who are still under contract or under reserve to another club is a rule violation,” he said at the Boston College Chief Executives Club. “So, obviously not anxious to see that.”

Harper signed a $330 million, 13-year contract with the Phillies last week, and said at his introductory news conference: “There’s another guy in about two years that comes off the books. We’ll see what happens with that.”

That would likely not be tampering, but he may have crossed the line when he told Philadelphia radio station 94WIP: “If you don’t think I’m gonna call Mike Trout to come to Philly in 2020, you’re crazy.”

A two-time AL MVP with the Los Angeles Angels, Trout grew up near Philadelphia, attended the Phillies victory parade in 2008 as a 17-year-old and has season tickets for the Eagles. The 27-year-old outfielder is set to become a free agent after the 2020 season.

“For me, I can be able to talk to Trout, or whoever it is, big-name free agent or whoever wants to come to Philly or is thinking about coming to Philly, I can say ‘Hey, this is the place to be,” Harper said in the radio interview. “This is where the fans are great, ownership understands it, our manager is awesome.”

Baseball Rule 3(k) prohibits “negotiations or dealings respecting employment, either present or prospective, between any player, coach or manager and any Major or Minor League Club other than the Club with which the player is under contract.”

“We’re in the process of gathering information about the comments and the context in which they were made,” he said. “We’re talking to both clubs and when we’re ready to decide whether it did or it didn’t we’ll let you know.”

Harper homered Wednesday in his first scrimmage with the Phillies and said his comments about Trout represented his intentions. Harper said he had been spoken to about the comments, but did not say who talked with him, only that it was not MLB.

“If I didn’t mean it, I wouldn’t have said it,” he told reporters.