SAC Tournament: Catawba rolls to first round win at home 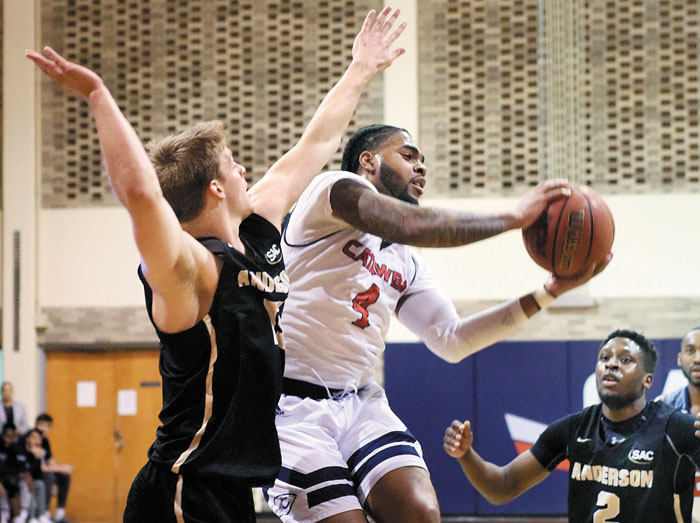 That meant a chance to land one of eight berths in the approaching national tournament was within reach — a chance only strengthened when the Indians whipped Anderson, 97-77, in the first round of the South Atlantic Conference Tournament last night.

“Fourth in the region should get us in the national tournament,” coach Rob Perron said at Goodman Gym, where Catawba (22-7) shot 56.6 percent from the field and advanced to Saturday night’s conference semifinal against Wingate in Greenville, S.C. “We’re now playing to win the tournament championship and get a better seeding.”

Catawba looked the part against Anderson (16-13). It mounted 15-point leads on three occasions in the first half, only to find itself behind in the count when senior guard Andrew Boynton launched the second half with a 3-pointer that gave the Trojans a 43-41 edge.

“We knew when we got up big in the beginning, it wasn’t going to last,” said Catawba’s Devin Cooper. “They made their run and caught up, so we put an emphasis on the first four minutes of the second half. We call them ‘wars,’ these four-minute segments from media-to-media (timeouts). We started winning wars and and were fortunate to sustain their run.”

The Indians received a second-half spark from junior Marcell Haskett, who rattled in a fadeaway jumper that triggered a 13-0 spurt. Layups by Cooper and Jordan McElveen fueled the rally — and McElveen’s 3-ball from the top of the key gave Catawba a 59-45 lead with 15:19 to play.

“We’ve got a lot of weapons on this team,” 6-foot-6 forward Malik Constantine said. “On days like this, when a lot of guys are playing well, we just have to figure out which wave to ride.”

They rode Haskett (18 points) and McElveen (6-for-7 FGA, 16 points) to another double-digit cushion, then used back-to-back dunks by Daquan Lilly to build a 70-51 lead and defuse Anderson’s comeback hopes.

“A few times this year, we’ve given up big leads,” said Cooper, a Radford transfer who shot 5-for-8 from the floor and scored a season-high 20 points. “The big thing tonight was when we made our run in the second half, we finished the job. We kept pushing and pushing.”

Constantine helped by completing a couple of three-point-plays and scoring on an ally-oop dunk — off a lovely feed from Jameel Taylor with 8:45 to play.

“We just put that play in yesterday and perfected it tonight,” said Constantine. “When we saw they switched from a zone to a man-to-man, I wanted to exploit that mismatch. I had a little guy under the rim with me.”

“I knew Malik was athletic enough to get it if I threw it right to the rim,” added Taylor, the senior guard who played his final home game and contributed 10 points, nine rebounds and five assists. “We all showed our character today. Defensive intensity — that’s what won the game.”

Catawba forced 14 turnovers and had a 25-11 scoring advantage off of giveaways. Anderson had only 14 points and four baskets in the opening 10 minutes, but caught up by limiting the Indians to one field goal in the last nine minutes of the opening half.

“They did a better job of picking the match-ups they wanted,” Perron said. “We were better at keeping them in front of us. That really helped. We made them shoot threes, but I didn’t think they could make enough of them to beat us.”

Afterward, Taylor delivered the evening’s best news. “We’re not done yet,” he said. “This next game is still a business trip.”

NOTES: Catawba, seeded No. 2 in the tournament, finished 13-2 at home. … Four Anderson players fouled out, including three starters. The guests received a game-high 25 points from senior Randall Shaw and 16 from reserve Kevin Simpson. Shaw made five of Anderson’s 13 3-pointers. … Catawba shot 63 percent from the field (19-for-30) in the second half and held a 35-23 rebounding edge. … Sixth-seeded Wingate (17-12) advanced with an 80-78 first-round win at favored Lincoln Memorial. The Indians split two games with the Bulldogs this season, falling 88-74 in December and winning 84-75 on Feb. 6.