Hayward, Celtics run away from Warriors for a 128-95 win 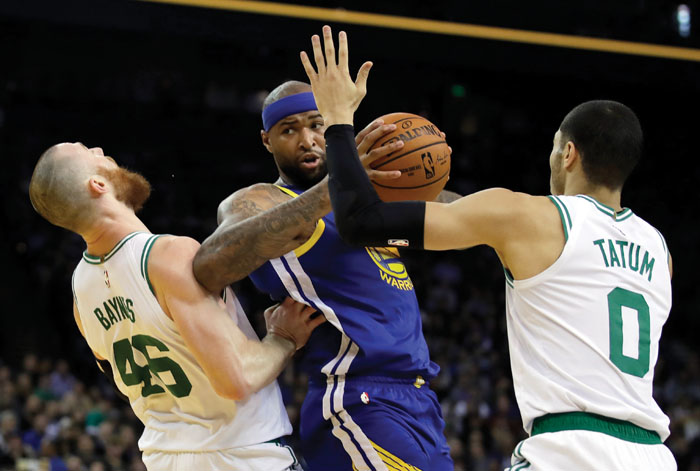 Golden State Warriors' DeMarcus Cousins, center, fouls Boston Celtics' Aron Baynes, left, as he looks to pass the ball away from Jayson Tatum (0) during the first half of an NBA basketball game Tuesday, March 5, 2019, in Oakland, Calif. (AP Photo/Ben Margot)

By JANIE McCAULEY AP Sports Writer
OAKLAND, Calif. (AP) — Gordon Hayward scored 30 points off the bench, Kyrie Irving had 19 points and 11 assists, and the Boston Celtics ran away from the Golden State Warriors early on the way to a 128-95 win Tuesday night in a game that turned testy with the two-time defending champions down big.
DeMarcus Cousins and Terry Rozier received double technicals with 8:44 to play. Cousins was called for his fifth foul on a charge drawn by Aron Baynes, then the fiery Warriors center stood over Baynes in clear frustration. Jayson Tatum bumped Cousins with his right arm and Cousins pushed back with some force, then Rozier entered the fray and he and Cousins traded shoves.
Boogie’s moment summed up an ugly evening of basketball by his team — and fans seeing their final season in the East Bay made a mad dash for the Oracle Arena exits in the closing minutes.
Stephen Curry provided a bright spot with 23 points and four 3-pointers on a night Splash Brother Klay Thompson sat out with soreness in his right knee.
Kevin Durant scored 18 points but committed five turnovers, while Cousins wound up with 10 points on 4-for-12 shooting — missing all five of his 3-point tries — and nine rebounds to go with four turnovers.
The Warriors, who had won the last two meetings with Boston, couldn’t overcome a lackluster first half in which they were outhsustled on both ends and faced a daunting 73-48 halftime deficit.
Tatum scored 17 points for the Celtics, who came in having lost five of six since the All-Star break.
Golden State missed its initial four shots and fell behind 11-0 as Boston started 5 of 7 before Curry’s jumper at 8:26. The Warriors made five straight shots and used a 12-2 burst to get right back in it.
Alfonzo McKinnie started in place of Thompson and contributed seven points in 17 minutes.
TIP-INS
Celtics: Boston improved to 6-6 on the road against the Western Conference. … Golden State had snapped the Celtics’ 10-game home winning streak with a 115-111 win on Jan. 26. … The Celtics — who shot 8 for 28 from 3-point range in Sunday’s 115-104 home loss to Houston, including 1 of 13 in the first half — were 14 of 34 from deep and got four 3s from Hayward.
Warriors: G Shaun Livingston missed the game with neck spasms. … Andre Iguodala, sporting a new look with his head completely shaved, played after dealing with lower back tightness. … C Kevon Looney missed a second straight game with right pelvic soreness. … McKinnie went through an extensive pregame warmup routine behind the scenes after he left against the 76ers with a bruised left hip. … Golden State earned a winning road record for a sixth straight season. … The Warriors added depth by recalling G Jacob Evans III from the G League Santa Cruz Warriors.
BAYNES’ MINUTES
Reserve Boston big man Baynes will remain on a minutes restriction with Boston playing consecutive nights. He returned Sunday against Houston from an 11-game absence because of a bone bruise in his left foot.
“He’s on a minutes restriction for the foreseeable future, so 15 max, especially with a back-to-back,” coach Brad Stevens said. “Right now, our thought is that he would be able to play in both games in the next two nights. We will see how he comes out of tonight.”
CHEERING CHIQUITA
Chiquita Evans became the first woman ever drafted into the NBA 2K League when Warriors Gaming selected her in the fourth round Tuesday night. A former college and semipro basketball player, Evans is now the esports league’s first female pro, one of the 126 players who will make between $33,000 to $37,000 per season, plus benefits and team housing.
“I think that’s really cool that she’s passionate and inspired and broke a barrier,” coach Steve Kerr said. “That’s awesome.”
Evans is now Bay Area-bound — and a lifelong fan of Durant.
“Pretty cool,” Golden State general manager Bob Myers said.
Durant, too, was thrilled.
“Esports has become a huge thing now,” he said. “More people who enjoy the game might get an opportunity to be professionals and make some money for themselves and make some money. I think it’s cool.”
UP NEXT
Celtics: At Kings on Wednesday.
Warriors: Host Nuggets on Friday.
___
More AP NBA: https://apnews.com/NBA and https://twitter.com/AP_Sports