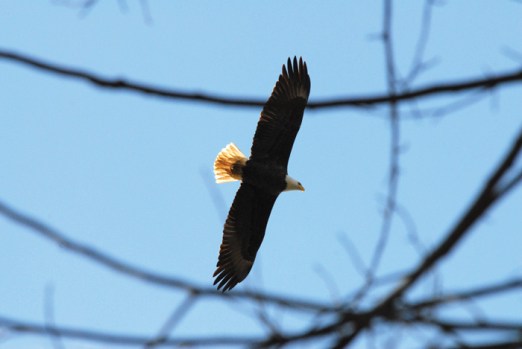 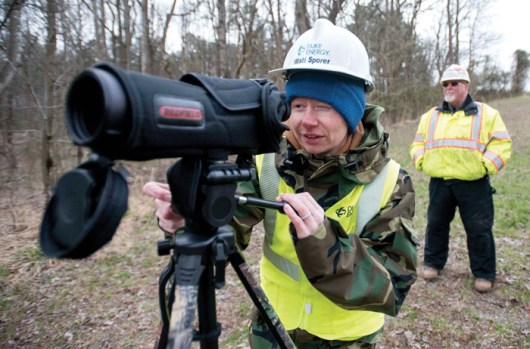 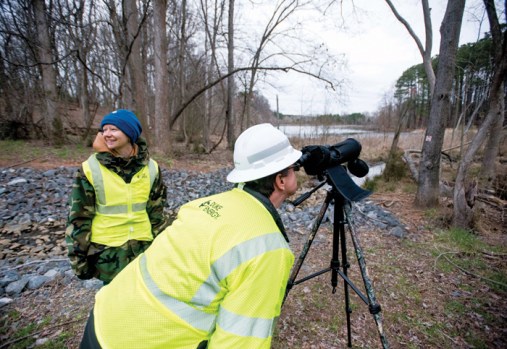 Misti Sporer, left, sets up a spotting scope to survey the bald eagle nest that was across the water. Duke Energy's Bill Norton takes a look through the scope. Jon C. Lakey/Salisbury Post 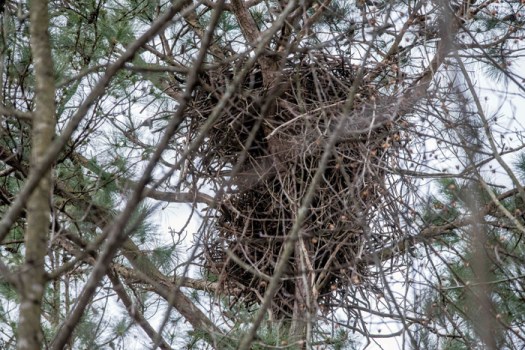 The roughly 5-foot-deep nest of the bald eagles is situated near the top of a large pine tree. Jon C. Lakey/Salisbury Post

SPENCER — Just as the sun was rising Tuesday morning, Misti Sporer and Max Gardner walked quietly into the woods toward their goal: a gigantic bald eagle nest just below the crown of a loblolly pine.

All talking ceased once they were within about 100 feet. Gardner held back a short distance as Sporer, lead environmental scientist for Duke Energy, moved closer for a 60- to 90-minute observation period.

Sporer made notes of the motion in the nest overhead and the clues of eagle activity she could find on the ground around her.

It was obvious a female, maybe a bit lethargic, was nesting on eggs and that her male partner was helping out with food, to a point.

“This particular male is kind of hands off,” Sporer said later with a laugh.

The nest location, which sits in the middle of a peninsula extending toward one of Buck Steam Station’s three ash ponds, has hatched two eaglets a year for at least the past eight years.

Longtime employees claim eagles have nested in this particular spot for decades.

Sporer’s visit to Buck Steam Station exemplifies the measures Duke Energy is taking companywide to find a balance between protecting bald eagles on one hand and producing power on the other.

The efforts at eagle and habitat protection at Buck are even more complicated because of the new combined-cycle power operation, the ongoing demolition process related to the old coal-fired plant, the construction of a coal-ash reprocessing facility, and the eventual decanting, dewatering and excavation of three ash ponds on the site.

Because of all the activity on the site, Duke has obtained a five-year nest disturbance permit from the U.S. Fish and Wildlife Service. It also has a bald eagle management plan for the 600-plus-acre Buck site.

Any violation or failure to follow the nest disturbance permit’s protocols can effectively shut down the Buck Steam plant, so everyone on the Buck site takes eagle protection seriously.

Dale Wooten, environmental field support for Duke Energy, said Buck held a class for every person on the site — instructions on where the eagle’s nest is, how not to disturb it and how to recognize the 660-foot circle, or “protective buffer,” around the nest, plus a 50-foot “exclusive buffer” into which you must be accompanied by a certified biologist such as Sporer.

“Our guys thought that was the best class they’ve had in a long time,” Wooten said.

On a larger scale, starting in 2016 as part of the company’s federal hydroelectric license, Duke Energy takes aerial surveys of eagles along the Catawba-Wateree Basin and in the Yadkin-Pee Dee Basin between Lake Tillery and Blewett Falls.

Conducted from a helicopter, the annual survey took place in February when checking on nests was easier because the deciduous trees were bare.

Bill Norton, of Duke Energy’s corporate communications office, said the overall eagle count in the Catawba-Wateree Basin has grown from 26 in 2016 to 42 this year, though the eagle population has declined from Lake Norman to Lake James because of development.

The aerial survey team spotted 23 eagles from Lake Tillery to Blewett Falls Lake. The Yadkin chain of lakes that includes High Rock, Tuckertown, Badin and Falls is not surveyed by Duke because the lakes are not part of the company’s power-generating system.

So the eagles at Buck Steam Station aren’t counted in the aerial survey, but they do get special attention.

Under the nest disturbance permit, issued June 22, 2017, the Fish and Wildlife Service has monitoring requirements of the nest.

The kind of monitoring Sporer conducted Tuesday morning has to be done on a monthly basis, from November to June, so the nest is observed during different periods of eagle activity.

Sporer said the monitoring must happen within two hours after sunrise or two hours before sunset — times when eagles are more likely to be around the nests. And as cold as it has been, the female is likely to be on her eggs now, keeping them warm during those periods.

Fresh whitewash (excrement) on the side of the nest and recently discarded bones are good evidence that a female is in the nest and sitting on eggs, Sporer said Tuesday.

Sporer also noted a “poop tree” nearby, betraying the spot where the male bald eagle will perch. He had left whitewash signs of his own and skeletal remains of catfish and a good-sized turtle.

The nest looked green and healthy enough. There were no squirrels around, definitely another good sign.

Sporer still had a few minor concerns. “Her behavior is slightly unusual,” she said of the female. The scientist noticed fresh whitewash on the sides of the nest, but not a lot of bones from fresh prey.

“Her behavior is slightly lethargic, which is a little alarming,” Sporer said.

She attributed the inactivity to the many days of rain and cold the eagles have been battling and took solace in knowing that “if her life were at risk, she will get off the nest and feed.”

Though they were removed from the federal list of threatened and endangered species in 2007, bald eagles remain covered by the Bald and Golden Eagle Protection Act, Norton noted.

Sporer said the eggs usually will hatch in March, and the eaglets or chicks fledge in stages. By the end of summer, they are flying and hunting on their own, with some young eagles sticking with their parents longer than others.

A female usually will lay eggs in December. The characteristic white head of an eagle doesn’t develop until it is about 5 years old. The life span of eagles in the wild — once they make it past 6 or 7 years old — is 15 years on average, though some eagles in captivity have lived much longer.

Eagles, which generally mate for life, often return to the same nests each year, as long as the parasite load of ticks and mites doesn’t cause them to relocate, Sporer said.

Sporer, Wooten and Gardner, also in environmental field support, report that the Buck eagles forage for prey on the main river (the Yadkin) and not in the ash ponds.

They resist any inclination to name these birds they admire regularly.

“We just call them our eagles,” Gardner said.

A bald eagle’s nest usually is built in a deep, funnel-type shape with a wide lip. From the ground, you often see only the top of a nesting female.

After the eggs hatch, you often will get better views of the adults perched on the lip of the nest as they feed the youngsters.

After her morning of observations, Sporer had to write detailed reports for a Southeast Region eagle biologist with the Fish and Wildlife Service. But Sporer hardly minds doing anything connected with these eagles at Buck.

“We want to do right by these birds,” she said.