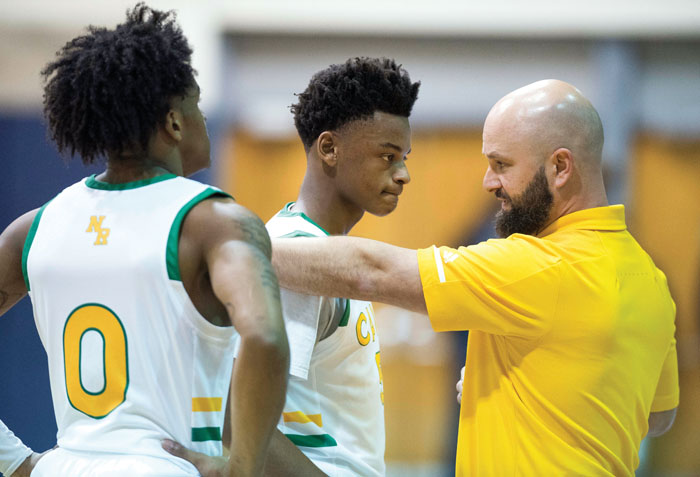 DAVIDSON — This isn’t the story the North Rowan boys basketball team wanted to tell, but it ends the same way — with a berth is Saturday’s 1A state regional final.

The visiting Cavaliers needed two overtime periods Tuesday night to fend off No. 2 seed Community School of Davidson, 69-56, in a scratch-and-claw, fourth-round confrontation.

“When you make it this far, you have to be good,” coach Jason Causby said, moments after North (28-2) secured its 21st consecutive win and a semifinal match with Bishop McGuinness. “But we feel fortunate as well. We outlasted these guys — and they may be the best team we’ve see all season.”

North ceded all of a 14-point halftime lead and fell behind, 46-45, when high-scorer Brandon Ellington (26 points) corkscrewed down the lane for a layup with 1:15 remaining in the fourth quarter. The Cavs’ Dayjuwon Cooke forced overtime when he converted the first of two free throws with less than a minute to play.

“It was just a tough, hard-fought game all the way through,” teammate Brevin Goodlett said. “I’m gonna need some ice after this one.”

Goodlett paced North with 20 points, including 13 in the first half when the Cavs limited CSD (27-3) to five field goals and constructed a 27-13 lead.

“We couldn’t make shots in our own gym,” losing coach Jackie Drakeford said, after CSD had its 15-game winning streak halted. “We missed eight layups and 11 3-pointers in the first half. In the second half, we did what good teams do and crawled back in it.”

With full-throated fans from both schools filling the bleachers and wreathing the court, the host Spartans drew within 33-26 when Ellington found a seam down the lane for a straight-line layup. Then in the final quarter, the 6-foot-3 senior was awarded a basket on a goaltending call and pushed CSD ahead, 38-37, with a fastbreak layup off a careless North turnover.

“As a coach, you don’t want to be the one to give away a 14-point lead,” Causby said. “But we knew they were going to make a run at some point. You don’t win 27 games without being fantastic at some things. They’ve got a great squad and Ellington was a match-up problem.”

The first OT saw North mount a three-point lead on a pair of layups by 6-5 sophomore Kendrell Goodes. The hosts answered with a 3-ball from the top of the wheel by Harrison Hosse and forced a second overtime when Ellington roto-rootered across the lane for a layup with seven seconds on the clock.

“We kept giving them the momentum,” said Cooke, a 17-point scorer. “We weren’t playing our game and that’s exactly what they wanted.”

They wanted no part of North’s Derrick Page as the second overtime unfolded. The senior guard stuck back-to-back 3-pointers from deep on the right side just 42 seconds apart — both on kickout feeds from teammate Quintous Smith — providing a 59-53 Cavs’ lead with 2:04 to go.

“We came out a little slow in the second half and overtime,” Page said after contributing 12 points. “Instead of catching, observing and making a smart play, we were forcing the ball against their press. I know I wasn’t having my best game, but they always tell me to keep shooting, even when I’m missing.”

“We’ve got such a strong senior group,” Causby added. “You’ve got to trust them to make plays. There weren’t a whole lot of screws you could turn as a coach. Derrick hitting those threes — that’s just a senior being a leader. These guys don’t want it to be over with yet.”

North outscored CSD 16-3 in the second overtime, scoring the first and last eight points of the session. Cooke closed the scoring with one of his signature dunks, ensuring a victory that keeps the Cavs’ post-season hearts ticking.

“We were more concerned with stopping the drive and the little passes that turn into dunks,” Drakeford said. “But actually, they shot the ball really well. That impressed me, but that’s playoff basketball for you — double overtime to get to the regionals. They beat us, so now I want them to go all the way.”

That’s a story for another day, one the Cavs would love to tell.

NOTES: With the top two seeds eliminated, third-seeded North Rowan will face No. 9 Bishop McGuinness (23-8) in the state’s final four. The Villains advanced with a 66-63 quarterfinal win against North Stanly. The game will be played Saturday in Hickory, either at Catawba Valley Community College or Lenoir-Rhyne University. Start time and location will be announced today.