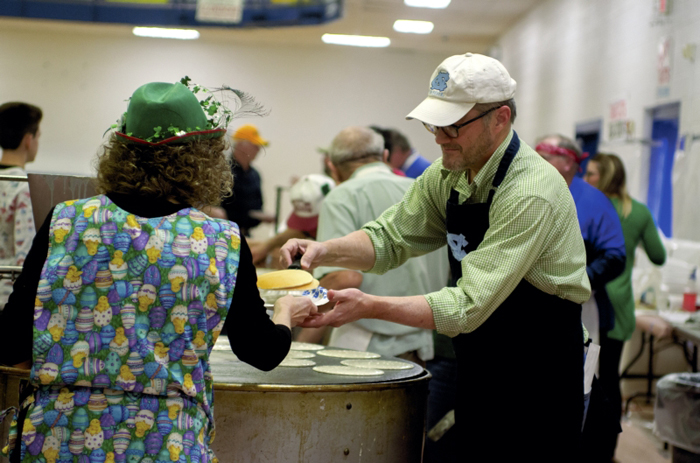 Stan Jordan serves a customer a pancake straight off the griddle at the 2017 Kiwanis Pancake Festival at the J.F. Hurley Family YMCA on March 17, 2017. Kristi Craven/ Salisbury Post file photo

Considered a “rite of spring” since its beginning in 1957, the Kiwanis Pancake Festival is the major fundraiser for the Kiwanis Club of Salisbury. More than $20,000 is netted each year from the festival, which is used to fund the children’s charity projects of the club.

This year, the festival is part of the 49 Days of Gratitude being observed in Rowan County and tied to the 49 Merci railcars donated to the United States by France for its appreciation of support during World War II.

The Kiwanis Club, because of its work with children, has chosen to honor teachers of the Rowan-Salisbury Schools at the Pancake Festival. In recognition of its gratitude, public school teachers will be admitted free to the festival.

Terrific Kids is a recognition program for students in elementary school. Classroom teachers grant Terrific Kid status to students each quarter who exemplify good behavior and character. Students receive a certificate, pencils, and a bumper sticker for parents to put on their car noting “My Child is a Terrific Kid.”

BUG, or Bringing Up Grades, is another Kiwanis-sponsored program designed to recognize elementary students for improving their grades. The awards are presented each quarter by teachers at school assemblies, with students receiving a certificate and trinkets.

Both Terrific Kids and BUG are sponsored by the Kiwanis Club at Isenberg, Overton and Hanford Dole elementary schools.

Isenberg Elementary also has a K-Kids Club sponsored by Kiwanis. A service club for fifth-grade students, it instills the value of providing service leadership to the school and community.

More than 200 local students are involved this year. Clubs develop their own service projects for benefiting their schools and local community.

Each school has a faculty adviser, who include Susan Eldridge at Carson; Carrie Vann at East Rowan; Kymberly Melton at North; and Sallie Pittman at Salisbury.

Key Club has existed at Salisbury High School since 1946. The club at North Rowan was chartered in 1985, with East Rowan following in 2002 and Carson in 2016.

Members of the Key Club are an integral part of the Pancake Festival each year. Patrons will see them in colored T-shirts representing their individual schools as they help with various tasks.

In addition to supporting the activities of the Key Clubs, the Salisbury Kiwanis Club offers a $1,000 college scholarship each year to four seniors who are members of the local Key Clubs.

Children’s charities supported by Pancake Festival proceeds extend beyond these programs in the public schools.

Members also donate and deliver magazines to Novant Rowan Medical Center and usher for Piedmont Players at the Meroney Theater.

The club is currently accepting new members. To learn more about the club, attend the Pancake Festival and talk with any member.