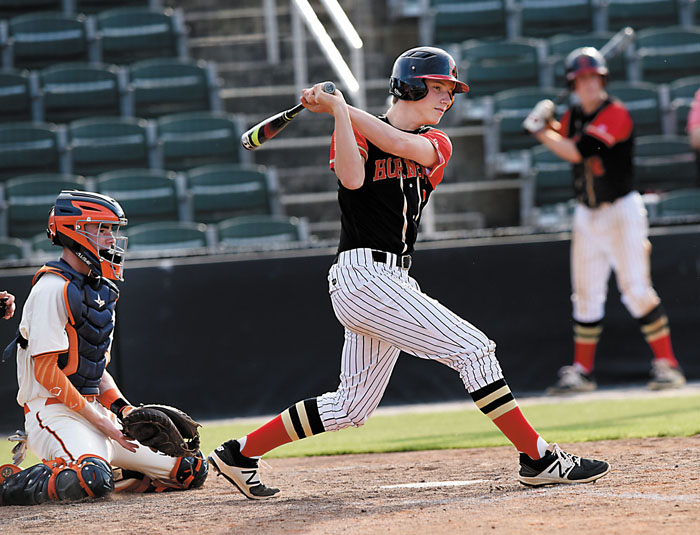 Salisbury's Bo Rusher bats during a game against Carson. Photo by Wayne Hinshaw, for the Salisbury Post

SALISBURY — The  Central Carolina Conference has become one of the state’s better 2A baseball leagues.

North Davidson, which did win the CCC in 2018, was 23rd in the final state rankings.

West Davidson, third in the CCC behind the two powerhouses in 2018, had a good club and won 19 games. Salisbury, the fourth-place team in the CCC, had a terrific 17-11 season, knocking off Ledford (regular season) and North Davidson (CCC tournament) and beating Bandys and Hibriten in the state playoffs.

“Ledford and North Davidson could compete very well in any conference in the state, 3A, 4A, doesn’t matter,” Salisbury coach Mike Herndon said. “This is a really good league, and now you have to watch out for Oak Grove, too, because their kids would be playing at Ledford or North Davidson.”

So that’s the baseball environment the Salisbury Hornets are competing in. They’ll have another winning team, but third place in the CCC may be their ceiling. Anywhere in the top half of a 10-team league will be pretty good.

There are holes to plug. Salisbury graduated four quality players. Chandler Lippard led the team in batting average the last two seasons. Griffin Myers mashed and was a key infield defender. Will Taylor and Joe Steinman were good athletes. Steinman also was the No. 2 pitcher.

Herndon hopes a group of seniors who haven’t played a lot can take a step forward. They’ve paid their dues and invested years of practice hours. Senior Blake Clark could start at first base, while Sam Combs is getting a chance to grab the third base job. Zach Robinette could be the starter in left field, where he’s competing with junior Archie Deese.

Parker Lippard, who had a smaller role last year, will be the regular second baseman. He’s off to a great start.

The pitching staff will boast a very stout 1-2 punch in big lefty Jack Fisher, who won seven games last season, and Bo Rusher, last year’s closer. Fisher was runner-up for pitcher of the year honors in a loaded league. Rusher had an ERA under 1.00 and saved four games.

Fisher has played in the outfield in recent seasons, but he’ll probably be stationed at first base this year when he doesn’t pitch.

Rusher, who will catch when he’s not on the mound, will be the biggest power threat in Salisbury’s lineup and the likely No. 3 hitter. He’s led the Hornets in RBIs three straight seasons. He also led in homers (3) and runs scored as a junior.

“Bo is going to hit,” Herndon said. “We just have to figure out the lineup around him.”

Other returning starters are right fielder Blaine Shellhorn and Vance Honeycutt, who will be the primary shortstop this season. Those two bring a lot of speed to the table.

“Shellhorn is an athlete with crazy pop in his bat, ” Herndon said.  “Honeycutt is an ideal lead-off guy. He’s smart, he can bunt, and he can run.”

Honeycutt, a sophomore, will probably be the No. 3 pitcher, which would mean Lippard sliding over to shortstop when Honeycutt takes the mound.

Another key player for the Hornets will be senior David Holden. He’ll be the catcher when Rusher pitches.  He’ll pitch some, and he could get at-bats at first base or second base.

“He’s a really solid catcher with an accurate arm,” Herndon said. “He’s good enough that he allows us to pitch Bo.”

There are plenty of new faces and question marks, but there enough sure things to know the Hornets will be good. With Fisher or Rusher on the bump, they should have a chance in all their conference games, no matter how powerful the opponents are.

“We lost a lot of hitters, lost a lot of RBIs, so we’ve got to see if we can score enough runs,” Herndon said. “I do think we can pitch it and catch it. We have the ability to be a very good 2A team.”