Carson girls fall at Freedom, 62-46, in 3A state playoffs 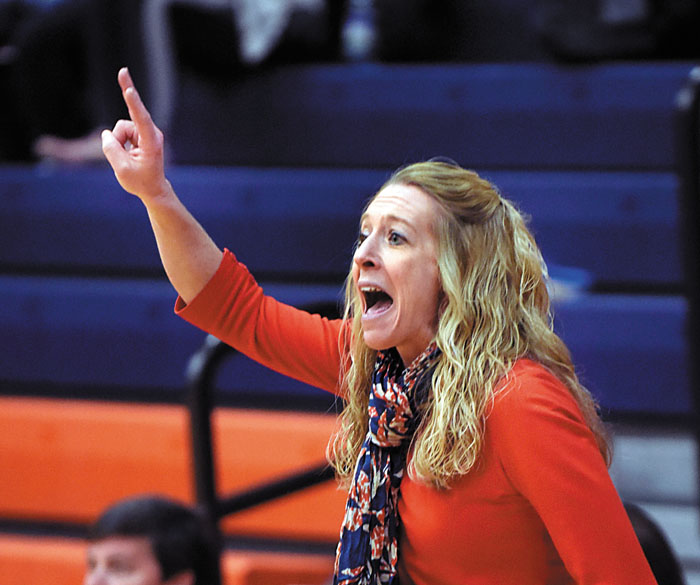 File photo by Wayne Hinshaw/ for the Salisbury Post ... Carson girls basketball coach Brooke Stouder saw her team lose at Freedom on Tuesday night in the state 3A regional semifinals. The loss ended the Cougars’ great season with a record of 27-3, best in school history.

MORGANTON — Freedom put Carson in a seven-point first-quarter hole here Tuesday night, and then gradually pulled away for a 62-46 win in a 3A West regional semifinal.

“Just a bad start for us and we spent the rest of the night trying to climb uphill against a really good team,” Carson coach Brooke Stouder said. “We never got over the hump.”

The Patriots, now 30-1, move on to the regional final in Hickory against Waxhaw Cuthbertson on Saturday.

Carson ends a great season at 27-3, after advancing to the fourth round of the state playoffs for the first time in school history.

Freedom hit three first-quarter 3-pointers and then led by as many as 15 points, twice in the second quarter, before Carson trimmed it to 35-26 at halftime.

The Cougars went on a 13-7 run that included a 3-pointer and seven total points from Hannah Isley. Carson was also 6-for-6 as a team at the foul line during that stretch.

“Hannah was a huge bright spot,” Stouder said. “We brought up her up to the varsity after Carleigh Perry was injured, and she was really good. She played without fear tonight.”

Freedom started the third period with a 3-pointer, but a basket from senior McKenzie Gadson cut the deficit back to 10 points. But then Freedom had a 6-0 run, going up, 44-28.

Freedom played keep-away early in the fourth quarter and Carson was able to force some turnovers and close to within eight points, but the Patriots closed the contest with another run — this one 8-0.

Hannah Isley scored a career-high 16 for the Cougars, who set a school record for victories this season and reached a regional semifinal for the first time.

Gadson had 13 in her final game for the Cougars.

“They were good, just super-solid at every spot,” Stouder said. “They were bigger than us at every position. Their guards are 5-10 and that made it a very tough matchup for us.”

“Great team chemistry and a very special and very unselfish team,” Stouder said. “They liked each other and they didn’t care about stats. They just showed up and played hard every night.”