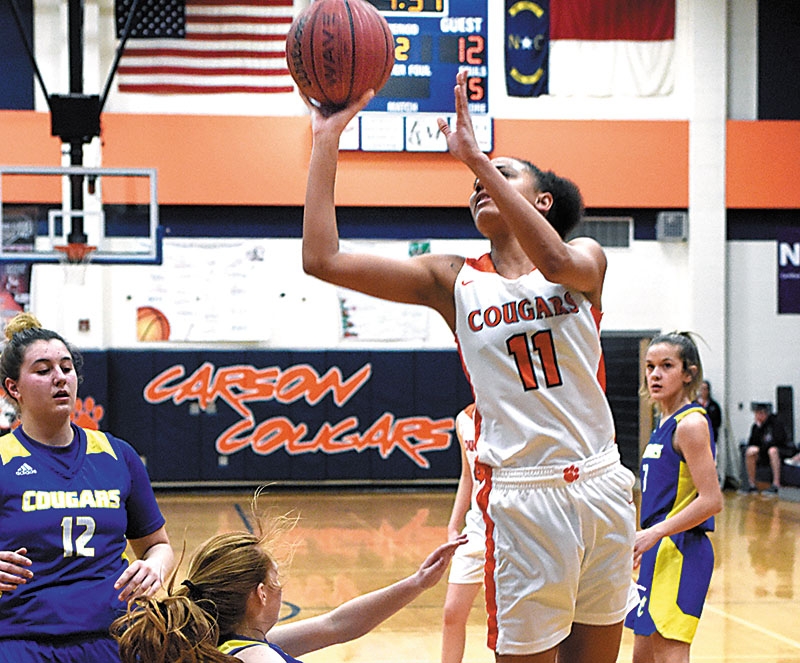 SALISBURY — Whatever you want to call it — fourth round, regional semifinals, state quarterfinals are all accurate descriptions — things get really serious now in the basketball state playoffs.

When players talk about “going to state” and “taking it all the way” in December, you chuckle on the inside. But not now. Now they’re actually halfway through the playoff grind. Three down and three to go — although everyone, of course, is still taking them one at a time. Every team left now isn’t just pretty good, it’s really good. Most have impressive winning streaks.

There are exceptions — the North Stanly boys come to mind — but if you’re still playing now, you probably have already tasted a championship this season, either in the regular season, the conference tournament, or both.

Carson’s girls are enjoying a season that is historic. They’re 27-2, breaking the school record for wins they set last season. They’ve made it this far for the first time. Tonight they go on the road for the first time in the playoffs. Seeded third, they’ll make the trip west on Interstate 40 to Morganton to play second-seeded perennial powerhouse Freedom (29-1) at 7 p.m.

Carson’s girls can really shoot the 3-pointer and they can defend full-court. That’s a good combination. It has compensated for a lack of tall people.

North was 2A state runner-up as recently as 2014. That team ran into Kinston’s Brandon Ingram (now starring for the L.A. Lakers) in the championship game.

North takes on the Community School of Davidson (that’s the city of Davidson, not the county of Davidson) tonight at 7 p.m. Seeded third in the 1A West bracket, North finished off an undefeated season on its home floor in Saturday’s third round, but now it has to travel to face the second-seeded Spartans (27-3).

North brings plenty of athleticism, good team size and lots of senior experience to tonight’s battle. North Rowan has won 20 in a row since losing to Salisbury and North Stanly in the Moir Christmas tournament.

Salisbury’s girls (25-4) also have returned to prominence. Seeded second in the 2A West bracket, they’ll be at home again tonight at 7 p.m. to take on third-seeded Forbush (26-3). Salisbury hasn’t lost at home this season. The Hornets haven’t made it this far since 2011 when they went 27-1 and won it all.

Defense, quickness and hustle are the strengths for the Salisbury girls. Wingate-bound Bryanna Troutman provides an automatic double-double.

Yadkin County is rural and seems an unlikely place to produce athletic powerhouses, but Starmount (in Boonville) and Forbush (in East Bend) are good in a lot of sports. The Forbush girls, especially, seem to be ever-present in the state playoffs, whether it’s in softball, volleyball, soccer or basketball.

Forbush went 12-0 in the Western Piedmont Conference. That’s the same conference that Surry Central, the team Salisbury fought its way past on Saturday, plays in.

Forbush lost to 4A power West Forsyth in the finals of the Mary Garber Classic early in the season. The other losses were to West Wilkes and Mount Airy. Forbush hasn’t lost since it fell to Mount Airy in a Christmas tournament game in Galax, Va., on Dec. 27. The Falcons have won their last 19 and average 61 points per game. Salisbury’s stingy defense will be challenged.

The Community School of Davidson boys beat the towering Mount Pleasant Tigers on their home floor by 30 points in a Christmas tournament. Mount Pleasant eliminated Salisbury from this year’s 2A playoffs. That gives you some idea of the challenge facing North Rowan tonight.

Community School of Davidson won a very tough PAC 7 league with a 13-1 record. North has seen two of the teams from that league in the playoffs already. North battered the league’s sixth-best team Carolina International in the first round, but had a competitive game with the fifth-place squad, Union Academy, in the second round.

Community School of Davidson is not as tall as North Rowan, but the Spartans have quick guards, they are accurate from the 3-point line, and they are very experienced. The top five players are seniors.

Brandon Ellington, a 6-3 scorer headed to Roanoke, provides 18 points per game. He was the MVP of CSOD’s Christmas tournament and conference tournament.

Guards Sage Alexander and Kaleb Johnson are under 6 feet, but they can apply defensive pressure. Ryan Renshaw and Harrison Hosse are 6-2 guys who have made a lot of 3-pointers.

CSOD lost its first two games of the season to Highland Tech and Bishop McGuinness, but has lost only once since then. That was on Jan. 18 to the Union Academy team that North Rowan beat last week. The Spartans have won their last 15.

Freedom reaches this point just about every season. This is the fifth time in the last six seasons, Freedom has made it at least to the fourth round.

The Patriots also will have the advantage of playing this one at home in the “TerrorDome.”

Carson was blown out at Freedom, 80-36, in the second round three years ago, although this Carson team is considerably better than the 2015-16 Cougars. McKenzie Gadson, a freshman on that team, is now the senior leader for the Cougars.

Freedom is not as scary as it was then, although the Patriots are still tall (Carson is not) and still formidable.

Freedom went undefeated in the Northwestern Conference, a mix of 3A and 4A schools that includes Watauga, Hickory and McDowell.

The only loss this season for Freedom was on its home floor in a Christmas tournament. Erwin High of Asheville beat the Patriots.

Erwin entered these 3A playoffs as the No. 1 seed, but was ousted in the second round by Statesville, a team with which Carson fans are very familiar.

Leading the scoring for Freedom are Blaikley Crooks, who is tough to stop on the drive, and Madison Bailey, a prolific 3-point shooter.

CC Davenport is the best rebounder for the Patriots, who beat Asheville on Saturday for their 21st win in a row.

North Stanly’s 21st-seeded boys are a Cinderella story. They’ve won three road games. They’ll head to Kernersville tonight to take on Bishop McGuinness. McGuinness knocked out Winston-Salem Prep, the favorite in the 1A playoffs, on Saturday. If North Stanly wins — and North Rowan wins — they’ll meet for the fifth time in neutral Hickory in the regional final.

Ledford’s girls, who are responsible for half of Salisbury’s four losses, will try to continue their mad march through the 2A East bracket. They’ve logged some major miles. Led by Catawba signee Lyrik Thorne, they’ll play at Kinston tonight.