Singh, at 56, in the final pairing at the Honda Classic 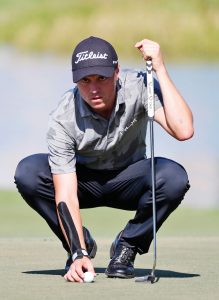 Justin Thomas lines up a putt on the eighth hole during the third round of the Honda Classic golf tournament, Saturday, March 2, 2019, in Palm Beach Gardens, Fla. (AP Photo/Wilfredo Lee)

PALM BEACH GARDENS, Fla. (AP) — Vijay Singh’s last PGA Tour victory in 2008. His only win at The Honda Classic was in 1999, on a course that he couldn’t remember. And he arrived at PGA National a few days ago wondering if his game is still good enough for him to be competitive with the younger generation.

So far, he’s got to like what he’s seeing.

And he’ll have a shot Sunday at making history.

Singh — who turned 56 on Feb. 22 — has a chance to become the oldest winner ever on the PGA Tour. His round of 5-under 65 on Saturday put him at 6 under for the week, one shot behind leader Wyndham Clark.

They’ll be in the final pairing Sunday. Singh has been a pro longer than the 25-year-old Clark has been alive.

“It would be great,” Singh said when asked what a win would mean at his age. “I’ve worked pretty hard. I’m physically quite capable of doing it. Mentally, I’m going to go out there and see how my mind works. If I just don’t let anything interfere, I think I can do it.”

There have been seven players to win on the PGA Tour after their 50th birthday, the oldest Sam Snead at 52 years, 10 months, 8 days in the 1965 Greater Greensboro Open. Singh will be eight days removed from his 56th birthday Sunday.

“He’s been one of the game’s best,” said Rickie Fowler, who was alone in fifth at 5 under following his round of 66. “He’s a ball-striker. He’s not as long as he used to be, but on this golf course you don’t necessarily have to be long. It’s about getting the ball in the fairway and hitting your lines and hitting numbers. You don’t necessarily have to go out and do anything special.”

Singh, Keith Mitchell (70) and Kyeong-Hoon Lee (68) are all one shot off Clark’s lead. Clark started in sizzling fashion, opening with five birdies in his first seven holes before giving a bit back as the wind started to pick up at PGA National.

Forecasters say the breezes will only get stronger from here, and that means Sunday could be wild. There were 28 players within five shots of the lead.

Brooks Koepka (70), first-round leader Jhonattan Vegas (69) and Michael Thompson (66) were 4 under, and Sergio Garcia shot 70 for the second straight day to reach  3 under.

Clark’s run of 122 consecutive holes without a three-putt ended at the par-3 15th, the start of the three-hole “Bear Trap” stretch. But he made enough good shots to end the day alone on the 54-hole lead.

“I felt like I managed where I hit the ball,” Clark said. “I put it in good spots. As long as I keep giving myself chances to make putts, I think I can win.”

The first time Singh played the Honda was 1994. Clark, who was three shots clear of the field at one point Saturday, was about 2 months old at the time. When Singh got to PGA National early in the week, the first thing he did was set out for a five-hour practice session — one of the many trademarks of his career.

He’s using a longer putter, something he says Bernhard Langer talked him into trying. Even though there’s more than a few gray hairs wisping out from beneath his visor, Singh is still in excellent shape and says there’s no tension or pain in his body.

“It’s work, determination, believing in what I believe in,” said Singh, who survived a super-windy Sunday to win the 1999 Honda at Herron Bay by two shots over Payne Stewart. “I just feel like if I play like I did today … when you aim at a target and swing the way you’re supposed to and the ball comes out, that’s the best feeling in the world.”

Winning Sunday would be a pretty good feeling as well.

DIVOTS: The last 50something to win on the PGA Tour was Davis Love III, who was 51 at 2015 Wyndham Championship. … Adam Schenk was assessed a two-stroke penalty Saturday for something that happened Friday; his caddie was behind him as Schenk lined up a shot in a bunker, and under golf’s new rules that’s not permitted. Still, Schenk is right there, three shots back after a 68 Saturday. … Sungjae Im shared the 36-hole lead with Mitchell but shot a 77 on Saturday and was 1 over. … Defending champion Justin Thomas played with even more support on his aching right arm, and in a pairing with former Alabama teammate Trey Mullinax shot a 67 to get to 1 under. He says he considered withdrawing, but believes the arm is good enough to play. “My health is always going to come first,” Thomas said.