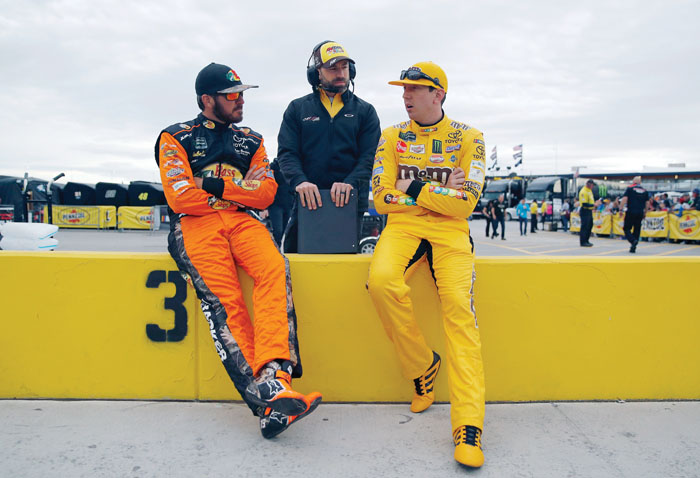 LAS VEGAS (AP) — Kyle Busch moved into position for a three-race weekend sweep in his hometown, holding on in double overtime to win the NASCAR Xfinity Series race on Saturday.

“I thought this would be the toughest of the three,” Busch said. “We had a fast race car, but we could never get the balance, even in the race right there.”

Busch still pulled off yet another victory in the second-tier series, and he’ll have the chance for a third straight win Sunday. Busch is the only driver ever to win Trucks, Xfinity and Cup series races in the same weekend, doing it at Bristol in 2010 and 2017.

Busch had to bounce back from falling to 33rd place during an early unscheduled pit stop due to a loose wheel, but the veteran Cup Series driver rolled back into the lead and still led 98 laps.

“I thought, ‘OK, there’s an opportunity here, but there’s a lot of things that have to go our way,’” Busch said. “Fortunately, that caution in the beginning of the second stage went our way and allowed us to put our first set of tires on with a fresh wheel. … This Supra was fast out there today, and awfully fun to drive. We worked for that one, that’s for sure.”

He stayed in front during two overtime restarts, the second caused when Brandon Jones took heavy damage in a collision with Cole Custer.

“I knew to keep fighting and keep working,” Busch said. “It was early enough where you could try to come back from one of those kinds of setbacks. I wasn’t sure how we were going to do it, being short a set of tires. We got a lucky break with that caution in the second stage that got us back on cycle.”

Busch has won just once in 15 career Cup races on his hometown track, but he’ll start third on Sunday. Busch isn’t a big fan of NASCAR’s new rules package, which keeps speeds down and downforce up in an attempt to encourage tough, tight racing.

LAS VEGAS (AP) — Ty Dillon and his fellow NASCAR Cup Series drivers are eager to see what the whole package can do.

The world gets its first real look at a new vision of NASCAR racing Sunday at Las Vegas Motor Speedway when its new rules package is fully implemented for the first time. The cars will have both tapered spacers and aero ducts, reducing horsepower, increasing downforce and creating conditions favorable to more passing and tighter racing.

The teams have spent months preparing for the change, and they got an intriguing, partial taste of the new rules last week in Atlanta. But nobody is really certain what will happen when all 40 cars and their taller rear spoilers hit the 1 1/2-mile track in Sin City for NASCAR’s third race of the season.

“You watch the Atlanta race, the restarts and everything, the racing was great,” Dillon said. “I think you’re going to double that here at Vegas with the drag ducts. I think it’s going to be an even better race, and what’s good for the fans is good for me. ”

NASCAR made the changes in an attempt to spark interest and excitement in a sport dealing with declining ratings and revenues in a crowded sports marketplace. In a perfect world, the changes will lead to increased drafting, a bit of door-banging and more exciting finishes in a sport that already has much more parity and late-race excitement than the likes of Formula One.

While most drivers are generally happy about NASCAR’s efforts to create more exciting races, any uncertainty causes a modicum of stress for meticulous drivers like Kurt Busch. The 40-year-old veteran already carries enough pressure whenever he returns to his hometown racetrack, where he is in an 0-for-18 career drought.

Here are more things to watch from the track at the top of the Strip:

Kyle Busch is never shy about voicing a complaint, and the Vegas native is among the drivers less excited about the rule changes. He believes they’ve minimized the importance of driver skill by guaranteeing nobody can pull away to a significant lead. If Busch or another top driver is knocked out of the race by the tight competition and big packs expected under the new rules, the world will hear about it.

Defending champion Kevin Harvick will start on the pole after emerging on top of a qualifying session in which the two fastest drivers — Alex Bowman and Chase Elliott — started their best laps an instant too late to count. Harvick predicted that the fastest car wouldn’t win the pole when drivers were allowed to draft off each other in qualifying, and he was correct. Harvick isn’t sure how the new rules will translate into real racing.

Many drivers expect to spend less time in the pits due to the combination of lower speeds and tougher tires, which don’t wear out quickly on Las Vegas’ fairly smooth asphalt. Of course, the tight racing could lead to more crashes and bigger lead shifts anyway.

Brad Keselowski will go for back-to-back victories after triumphing in Atlanta last week despite being quite ill. Keselowski also won at Vegas last September when the track hosted the playoff opener. He will be wearing a tribute helmet to Mark Donohue after passing him last week for the most wins by a driver for Roger Penske across all styles of motorsports. Keselowski has 60 wins for Penske, including 27 in the Cup Series. Donohue died after a crash in practice for a Formula One race in Austria in 1975.

Kyle Larson has three top-three finishes at Vegas in his last three trips to the track, and he has led more laps than any driver this season. He was leading in Atlanta before a pit-road speeding penalty sent him to the back. Now that he has made up with Hendrick Motorsports over his joking comments about “cheating,” he could be in position for another big race.

Brown says ‘too much smoke’ to return to Steelers