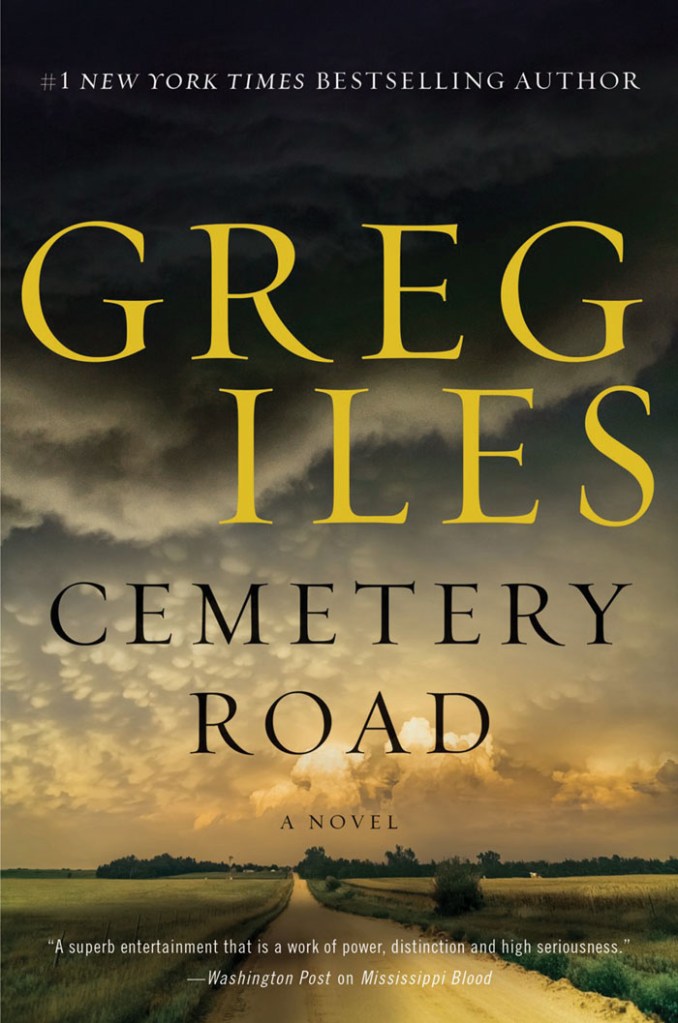 The re-emergence of Greg Iles was one of the more heartening literary events of recent years.

Iles, for those who don’t know, survived a horrendous 2011 car crash that resulted in a ruptured aorta, a medically induced coma and the partial amputation of one leg.

When Iles came back from that accident, he came back in a big way. In 2014, he published “Natchez Burning,” an 800-page doorstopper that was followed by two volumes of comparable size: “The Bone Tree” and “Mississippi Blood.” Together, the books recounted the private trials of one Mississippi family while illuminating more than 50 years of troubled racial history.

The words “magnum opus” could have been created to describe these books. Now, Iles returns with “Cemetery Road,” an ambitious stand-alone thriller that, like its predecessors, is both an absorbing crime story and an in-depth exploration of grief, betrayal and corruption in a small Southern community.

The narrator and protagonist is Marshall McEwan. Marshall is a native son who has made a name for himself in the wider world, and who has returned to his childhood home — Bienville, Miss. — under difficult circumstances.

Marshall’s father, who has run Bienville’s local paper, the Watchman, for most of his life, is dying from a combination of Parkinson’s disease and advanced alcoholism. Marshall, himself a journalist, leaves his post at CNN and returns to Bienville to help his father and — he hopes — halt the Watchman’s decline.

He soon discovers that the town itself is dying, a victim of factory closures and diminishing economic opportunities. The town needs a miracle to survive. But when that miracle arrives, trouble follows.

A group of Chinese investors have agreed to construct a billion-dollar paper mill on the outskirts of Bienville, bringing jobs and eventual prosperity back to the town. When Buck Ferris, amateur local archeologist, discovers what may be ancient ruins on the proposed building site, he is murdered before his discovery can impact negotiations for the mill.

Marshall, for whom Buck was a childhood friend and mentor, is determined to track down the killer, whatever the cost. His investigation brings him into immediate conflict with the town’s ruling cabal, a sinister group of power brokers called the Poker Club. The club’s 12 members treat Bienville as their private fiefdom, and they are fully prepared to go to war against anyone who stands in their way.

These elements — the controversy surrounding the mill, Buck Ferris’ murder, Marshall’s subsequent investigation — form the outer, public face of the novel and are set against a painstakingly created backdrop of complex, often painful personal relationships.

Marshall’s return to Bienville is, on one level, the act of a dutiful son. On another, it is a direct confrontation with the darkest moments of his past. And the past, as anyone familiar with Iles’ fiction knows, is a potent — and omnipresent — force.

For Marshall, one memory stands out above all others: the death by drowning of his older brother Adam. The incident, which took place decades earlier, was the result of a night of reckless teenage bravado for which Marshall has always blamed himself.

Over the years, grief and guilt have undermined his remaining family relationships. He and his father — a man with his own tragic personal history — are caught up in an endless cycle of bitterness and mutual misunderstanding. Marshall’s return represents a final opportunity to bring that cycle to a close.

Complicating Marshall’s return is the fact that Jet is now married to Paul Matheson, son of one of the Poker Club’s leading members. Paul is a Special Forces veteran and a private military contractor suffering from recurring bouts of PTSD.

He and Marshall have an impossibly complicated relationship. Best friends during adolescence, they came together again in Iraq, where Paul saved Marshall’s life. Back in Bienville, Marshall — lonely, morally conflicted and struggling with yet another personal tragedy — begins an affair with Jet, an affair that will have enormous personal consequences.

Secrets, murder, political malfeasance, sexual misconduct: These are just some of the pieces in play in this sprawling account of people trying — and usually failing — to manage their messy lives in a town struggling for economic survival.

Though strictly speaking a suspense novel, “Cemetery Road” is, in fact, a great deal more. In the precision and power of its language and its sheer amplitude of detail, Iles’ latest calls to mind the late, great Southern novelist Pat Conroy.

Like Conroy, Iles writes with passion, intensity and an absolute commitment to the material at hand. The success of his recent Natchez Burning trilogy was clearly no fluke. Greg Iles is back and at the top of his game. He couldn’t be more welcome.

Sheehan is the author of “At the Foot of the Story Tree: An Inquiry Into the Fiction of Peter Straub.”