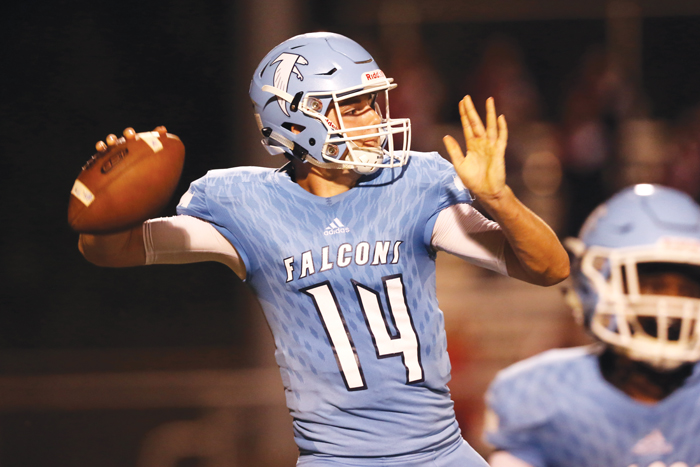 James Sipes file photo/for the Salisbury Post ... West Rowan QB Payne Stolsworth (14), shown during a game last October against East Rowan, has announced that he will continue his education and football career at N.C. Wesleyan in Rocky Mount.

MOUNT ULLA — West Rowan’s record-setting quarterback Payne Stolsworth is headed to the school that showed him the most attention and the most love — North Carolina Wesleyan College, a Division III school in Rocky Mount.

He should have the chance to play early. West head football coach Joe Nixon, West head boys basketball coach Mike Gurley, and West head baseball coach Seth Graham all have benefited from big performances by Stolsworth, one of the county’s top three-sport athletes. They believe Stolsworth could end up being “the guy” for the Battling Bishops, who compete in the USA South Conference with schools such as Averett, Greensboro, Methodist and Brevard.

“He led us,” Gurley said. “Now, I fully expect him to go lead a new bunch of guys in Rocky Mount.”

Stolsworth was impressed with N.C. Wesleyan’s facilities, which include a sweet, 5,000-seat stadium, an impressive field house and a state-of-the-art training facility.

“It wasn’t what I expected at all when I went up there to visit,” Stolsworth said. “I was very surprised by it. It wasn’t just some little D-III program. Everything was a lot bigger and better than I expected.”

For the majority of his life, Stolsworth was groomed to be a college baseball pitcher. He made some varsity 3-pointers for West basketball his freshman year, but he didn’t even play football.

Heading into his sophomore year, Stolsworth was coaxed into joining the football team. The plan was for him to provide depth at QB, to back up the team’s best athlete, Kortez Weeks, who was making a transition from receiver to taking snaps. But a disastrous 41-0 loss to Davie County in Week 2 sent West’s coaches back to the drawing board during the open week that followed. When West returned to action against Robinson, Stolsworth was throwing and Weeks was catching. Stolsworth threw for 196 yards that night, including two TDs to Weeks. That was the start. Stolsworth quarterbacked the Falcons the rest of his career.

And what a career it was.

“He had really good receivers to throw to (led by Weeks, and then Jalen Houston), but give Payne credit – he put up phenomenal numbers for a guy who took over in the third game of his sophomore year,” Nixon said. “Quarterback is the toughest position. There’s only one, and so every eye is always on you. You get praised hard, but you also get criticized hard. It wasn’t easy for him, but he made tremendous progress. He became not just an accurate passer, but a great leader for our football team.”

Stolsworth turned in three almost identical seasons for the Falcons as a passer. In terms of passing yards, he had seasons that rank 13th, 14th and 17th on Rowan County’s all-time list. He threw for 6,085 yards in his career, second in school history and fourth in county history. He threw 68 touchdown passes, second in county history and the most ever by a Falcon. He had a 358-yard passing game as a junior to break the single-game record at a school that has almost always relied on running the football.

“Looking back on it, the yards, the records, aren’t what means the most to me,” Stolsworth said. “Just getting the chance to be West Rowan’s quarterback as a sophomore was what I’ll remember. It was eye-opening to be the starting quarterback. That’s when I started thinking I might have a future in football.”

“I made a decision that I needed to drop a few pounds and get faster and quicker,” Stolsworth said. “I worked out with (West legend and trainer) K.P. Parks and I started going to Planet Fitness every day. I still work out every day, and it’s paid off.”

Stolsworth changed his body quite a bit. He was noticeably more agile and versatile during the recent basketball season in which he scored 415 points and led the Falcons with 17.3 points per game.

Graham plans to use him in left field as well as on the mound this baseball season, another testament to his improving speed.

As far as the mental and emotional aspects of playing quarterback, Stolsworth has a solid demeanor for the position. He doesn’t rattle easily. If he does make a poor throw, he can move right on to the next play.

“He never gets too excited, never gets down,” Nixon said. “He’s an even-keel guy who can go with the flow.”

That’s true, but at the party thrown recently in his honor in West’s media center, he did look a little excited about his chance to become a starting quarterback at the next level.

“He’ll be good,” Nixon said. “He’s that guy who can stand in the pocket under pressure and deliver the football.”