Darrell Blackwelder: Bradford pears – a huge down side 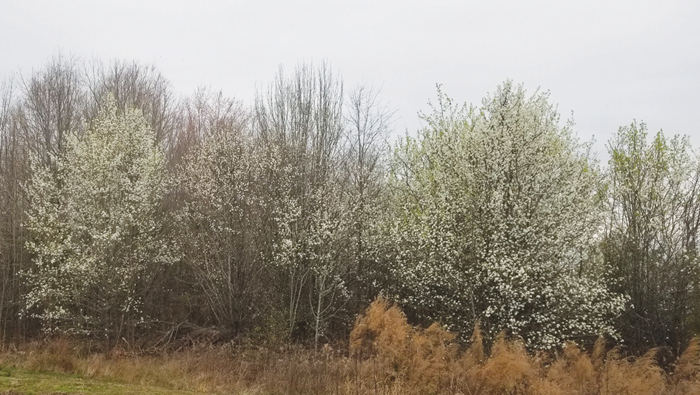 The decorative Bradford pear tree has yet another serious problem — it is now considered an invasive plant species. Photo by Darrell Blackwelder

Bradford pears across the county are now in full bloom with radiant white canopies. They are also dotting their blooms along fence rows, abandoned fields and highways.
Years ago, Bradford pears were touted as the tree of the future due to small size, compact, colorful blooms and brilliant fall color. After a few years, however, the perfect tree showed its “true colors” as a disease- prone, weak-branched tree, fast becoming a detriment to most landscapes.
Now the tree has another a serious problem as an invasive plant species. Bradford pears were originally sterile and not able to bear fruit. Because of the weak branch structure and narrow crotch angles, plant breeders developed new cultivars such as ‘Cleveland Select’ and ‘Chanticleer’ pears, with better crotch angles which allowed them to withstand wind and ice.
Unfortunately, these newer cultivars were able to cross pollinate with ‘Bradford’ pears to produce viable fruit, easily spread by wildlife. Starlings and other birds eat the small fruit and scatter the seeds.
To make matters worse the invasive offspring of these ornamental pears have large thorns, making removal very difficult.
So you may want to reconsider planting Bradford pears and select another type of tree.
Go to https://www.invasive.org/browse/subinfo.cfm?sub=10957 for more detailed information about this invasive tr