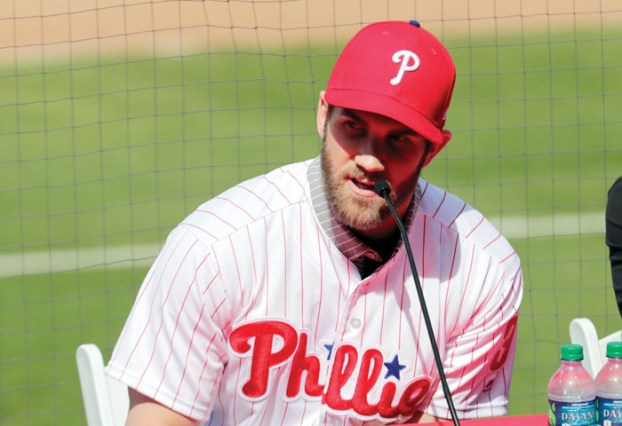 Harper gets to the Phillies' camp 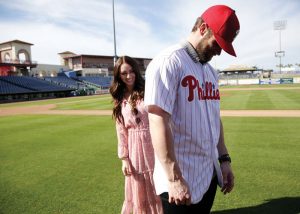 AP Photo/Lynne Sladky … Bryce Harper stands on the field as his wife Kayla looks at his jersey after being introduced as a Philadelphia Phillies player during a news conference, Saturday, in Clearwater, Fla. Harper joked that Kayla doesn’t like his new No. 3, because “she likes even numbers.” Harper wore No. 34 during his time with the Washington Nationals.

The six-time All-Star outfielder and the Phillies agreed Thursday to a $330 million, 13-year contract, the largest deal in baseball history. Now a team that hasn’t had a winning record since 2011 is talking about winning championships.

“Everybody talks about this picture behind us,” slugger Rhys Hoskins said on Friday about a photo hanging outside the clubhouse that captures the moment the team won the 2008 World Series. “There’s rally towels waving around, can’t see an empty seat, can’t see a place where people can stand. I don’t want to hear about it anymore. I want to feel it. I think we’re on our way and Bryce gives us a chance to be there.”

The 26-year-old Harper could be the final piece to get the team over the top, though his lucrative contract doesn’t preclude them from adding more. Dallas Keuchel, the 2015 AL Cy Young Award winner, remains unsigned.

“We obviously got a lot better before the move,” Hoskins said. “There was a buzz around camp with the guys we got previously. But you bring in a guy like this and I think now we think and we know we can take the next step from last season to now this is ours. We feel that way. This is a confident bunch. You add a player like this and it makes everyone better.”

That buzz Hoskins mentioned was even louder as everyone from ballpark attendants to team personnel waited for Harper to show up. He arrived on owner John Middleton’s private plane Friday afternoon and is expected to be introduced as early as Saturday after he takes a physical needed for the deal to be finalized. Two lockers were cleaned out for him inside the clubhouse.

Middleton, who flew to Las Vegas last week for a second meeting with Harper and his agent, Scott Boras, signed autographs for excited fans a couple hours before the Phillies beat Pittsburgh 7-3 in an exhibition game.

Harper already has been a hit at the box office before hitting his first home run. The team sold more than 100,000 tickets in only a few hours after Harper agreed to the deal. Demand for tickets for the opener on March 28 doubled on the secondary market.

“I was pretty stunned by it,” McCutchen said of the news. “Wow, he’s coming here. It’s pretty cool. We’re all pumped about it.”

Harper’s contract doesn’t include an opt-out clause and contains a full no-trade provision. Several players talked about the message that sends.

“To hear that, it shows he’s committed to the city and all those rumors about him not wanting to play in the city, it throws those out and shows how committed he is to winning and build a legacy for himself and the city of Philadelphia,” infielder Scott Kingery said.

Hoskins, who also is represented by Boras, said he never tried to sell Harper on coming to the Phillies. He offered to give Harper an honest perspective on playing in Philadelphia and for manager Gabe Kapler. Harper didn’t ask for any advice, however.

“Through his meetings, he got all the questions he had answered,” Hoskins said.

Harper is the biggest free-agent signing in Philadelphia sports and he’ll face pressure to help the Phillies win only the third World Series title in franchise history. He’s faced enormous expectations since appearing on a cover of Sports Illustrated as a 16-year-old in 2009 under the title: “Chosen One.” He’s wearing a Phillies uniform on the cover of MLB’s video game, and Philadelphia’s projected win total rose from 85 to 89 in Baseball Prospectus’ PECOTA program (Player Empirical Comparison and Optimization Test Algorithm), tied with Washington.

His numbers could skyrocket in a lineup filled with quality hitters and in a hitter-friendly stadium. Harper has batted .268 with 14 home runs, 32 RBIs, a .365 on-base percentage, a .564 slugging percentage, a .930 OPS and 48 hits in 50 games at Citizens Bank Park.

“You throw that guy in any lineup and it’s going to make it dangerous,” Kingery said. “Lucky for us, he’s with us and he’s been doing some damage at Citizens Bank.”