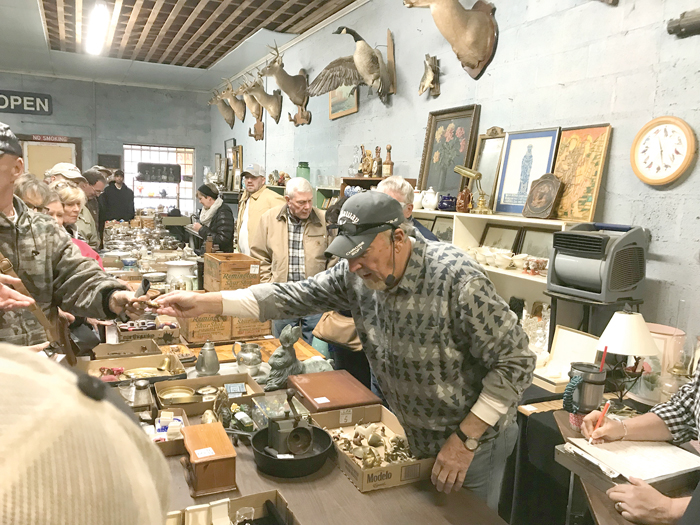 SALISBURY — Greg Wagoner is a bit of a fast talker at work.

He has to be. His livelihood depends on it.

A professional auctioneer with a smooth-as-silk, Southern-tinged chant, Wagoner, at 61, has spent the past 25 years selling thousands of items — from art to antiques, knick-knacks to nostalgia, trinkets to taxidermy animals and every oddity in between — out of his packed-to-the-ceiling warehouse at 429 N. Lee St.

“People who come to auctions are enamored by the chant,” said Wagoner, who attended the Mendenhall School of Auctioneering in High Point before obtaining his professional license at 27. “But this is a tough business to be in if you don’t have a thick skin. There’s so much more hard work that goes into putting on an auction than people could ever imagine. The number of hours spent getting ready is unreal.”

An estate auction on Feb. 23 was no exception.

Standing in front of a long row of tables with a treasure trove of silver-plated serving pieces, fine porcelain china, ornate sculptures and towering brass candelabras fit for a church altar, Wagoner quickly scans the tables and the crowd.

It’s a selling circus, and Wagoner is the ringmaster. The only things on the table that are not for sale are the memories and sentiments attached to each item.

Unlike auctions of old where buyers calmly sat in chairs and bid by raising fancy paddles showing elegantly scrolled numbers, Wagoner’s auctions are more of a contact sport. Buyers nudge and edge their way around the tables, weaving up and down aisles before proudly staking their claim to a fruit box lid full of mismatched Christmas ornaments from the 1960s or a stack of stained table linens. In their hands are crumpled pieces of paper with a number scratched with a black marker.

A man in his 80s wearing a VFW cap and chewing a toothpick watches his wife carefully inspect a dainty set of teacups bearing a picture of a young Queen Elizabeth. Both are jarred from their thoughts as Wagoner’s voice reverberates from a tinny speaker perched high in the corner.

Like a preacher at a tent revival, Wagoner knows his flock. Many of his regular buyers are eager for him to move down the line and get to the treasures they’ve been waiting to bid on all morning.

Some auctioneers stand behind a podium waiting to be handed items. Not Wagoner. He paces back and forth, his eyes searching for the slightest hint of a bid.

Laying hands on a large jar, Wagoner lifts it high above his head. Several men in the crowd lean in closer, eyes squinted to get a better look at the tiny flecks of gold veiled behind clouded glass.

“I’ve got a pickle jar full of watch crystals. Who will give me five?” Wagoner croons.

The dance between buyer and seller is over in a matter of seconds. The item is sold, handed to its new owner and it’s on to the next one.

Before he was a full-time auctioneer, Wagoner operated Beggars Bazaar in Salisbury for more than 12 years. He developed a knowledge of high-end furniture and collectibles, paying special attention to market trends and the pitfalls of passing fads. In 2014, one of Wagoner’s employees found a grenade with pin still intact while sifting through a box purchased at an estate sale.

Wagoner said it was the excitement of finding something  “unusual” that attracted him to the auction business.

“I liked the freedom of working for myself,” Wagoner said. “But it’s the thrill of coming across something rare or unique that’s the real reason I enjoy what I do so much.”

Wagoner’s induction into the business began in the 1980s while working for a friend’s auction company in Charlotte, where he sorted and tagged items to be sold. Along the way, he dabbled in estate auctions before finding steady work auctioning off unclaimed storage units for U-Haul.

“Everything I know about running an auction is because I started at the bottom and worked my way up,” said Wagoner. “I learned early on the value of getting my hands on the merchandise first, so I can see what I’m working with. Part of my job is to get as much money as I can out of every item being sold while trying to realistically manage my clients’ expectations of what they think that those items are worth.

“Just because an item is sentimental or old doesn’t mean it will bring a high price. Auctions are a numbers game. At the end of the day, everything has to get sold. My staff and I work hard to ensure everybody is happy and gets what they want. ”

Auctions and auctioneer license requirements vary from state to state. The North Carolina Auctioneer Licensing Board, whose members are appointed by the governor, ensures auctioneers such as Wagoner abide by a code of ethics designed to guarantee high standards for customers and fair business practices.

While most people Wagoner’s age are thinking about retirement, it’s the physical labor of his job that helps him stay fit and young at heart.

“Give me a microphone, and I come to life,” Wagoner said. “The night before an auction, I need to rest and get ready. I’m kind of like a musician before a concert. I have to make sure when it comes time, I’m ready to perform.”

The Feb. 23 estate auction started at 10 a.m., but the planning and preparations began in August.

Wagoner, with help from two men in his crew, was responsible for picking, packing, hauling and unpacking items from the estate into warehouses located at his home. From there, he inventories and sorts the contents before auction day. In return, he takes a percentage of the final sales. When all is said and done, Wagoner said the profit margin in his business can be small.

“If I can get to the estate first, before stuff gets thrown away and rummaged through, then I can typically find the items that will go for more money,” he said. “I’ve pulled more valuable stuff out of the trash and dumpsters than you’d ever believe.”

And because the market for collectibles and antiques is constantly changing, Wagoner said what was popular or fashionable five years ago can nose-dive in value overnight.

“A lot of times, a consigner will think a dated, 30-year-old piece of furniture that was popular back then is worth more money because it’s vintage or retro. Not!” he said. “Or worse yet, they’ll throw something out from the estate thinking it’s junk, not knowing that item may be selling really well right now. It’s like throwing money away. I caution people to wait until I get there before they toss anything out. ”

Wagoner said he feels blessed to have a solid base of loyal customers who support his auctions despite dips in the economy.

“People in and around this area come to my auctions because they know me and want to have fun. Everything in my business is done by word of mouth,” he said. “Some of my best buyers come to my auctions to see how much money they can save so they can turn around and resell what they buy in their own shop or on eBay. And I’m fine with that. I want everyone to be successful so they’ll come back and buy more.”

“An auction isn’t like a normal business. You don’t always get what you put into it. You get what you can on any given day, and you make the most of it. It’s a lot like life,” he said.