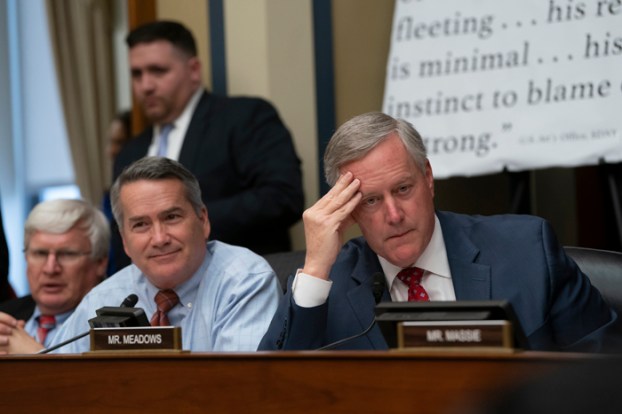 Almost nothing in common — except a friendship

WASHINGTON — Rep. Mark Meadows made his reputation on Capitol Hill as the guy who sets political fires.

Rep. Elijah Cummings rose to national fame as a leader trying to put fires out in his hometown.

The western North Carolina Republican and the Baltimore Democrat have almost nothing in common, except their service on the House Oversight Committee. Yet the duo have developed a kinship that went under the radar until Wednesday’s hearing with President Donald Trump’s former personal lawyer, Michael Cohen.

Rep. Rashida Tlaib, D-Mich., just eight weeks into office and the last questioner of Cohen, finished her remarks by accusing Meadows of pulling a “racist” stunt by having a black employee of Trump stand behind him at the hearing. Meadows demanded an apology, and the entire hearing headed toward a racially incendiary conclusion.

Then Cummings negotiated a calm finish that kept the focus of the hearing on Cohen’s allegations against Trump.

By Thursday morning, as House votes ended for the week, Meadows left his usual seat near the center aisle to approach Tlaib.

“I went over to her and said, ‘Listen, thank you for the gracious way that you handled it.’ And I just wanted her to know that there is no animosity or hard feelings at all, she said the same, and it was just a very good moment,” Meadows told reporters afterward.

The two lawmakers hugged and spoke for a few minutes, their first real conversation ever.

The detente might never have happened if not for Cummings and his unique friendship with Meadows.

Cummings, 68, and Meadows, 59, have almost nothing in common. 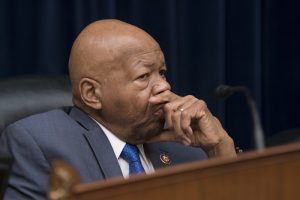 Rep. Elijah E. Cummings, chairman of the Committee on Oversight and Reform, presides over the last hour of testimony by Michael Cohen on Wednesday. J. Scott Applewhite/Associated Press

Cummings, in his 13th term, is a senior member of the Congressional Black Caucus. He counts Sen. Elizabeth Warren, D-Mass., as a partner in his liberal causes. The son of sharecroppers, he gained national acclaim in 2015 when he walked West Baltimore’s streets during riots following police brutality accusations, helping calm a city that was literally on fire.

Meadows, in his fourth term representing North Carolina’s 11th Congressional District, is chairman of the House Freedom Caucus, the arch conservative caucus that drove Republican John Boehner out as speaker for lack of ideological purity. He helped craft the strategy for Trump to refuse to sign a temporary funding bill that led to a 35-day shutdown of parts of the federal government.

Both Cummings and Meadows said there is nothing special about their friendship. They have previously worked together on prescription drug issues and, in previous years, when Republicans were in the majority, Meadows served as intermediary with Cummings, then the ranking Democrat, to work out procedural deals on committee work.

Considering what’s ahead for this normally partisan panel, Cummings and Meadows may be called upon again to keep the peace on one of most important committees handling investigations involving the Trump administration.

“He’s a good friend. We disagree on 95 percent of the issues, but, OK, we’re able to talk,” Cummings said in an interview Thursday. “He’s cordial; we’re able to negotiate the things that we are able to agree on. And I like him.”

Cummings brushed aside any criticism from liberal activists who view Meadows as a racist defending Trump. He appears to have never seen or heard about statements that his friend made during his 2012 campaign about returning Barack Obama to Kenya — a seeming embrace of the racist birther conspiracy that promoted untrue allegations of the president’s birthplace.

Those 2012 videos made the rounds of social media again following his exchange with Tlaib, and Meadows tried to again apologize for those remarks.

“I’ve addressed that dozens of times, and candidly, apologized for that a number of times. That was when I was running for office, I answered a question,” Meadows said, adding that he had just returned from a mission in Kenya at the time of the campaign.

“Anybody who knows me knows that I look to show respect regardless of race or gender or anything,” he said.

Meadows brought Lynne Patton, a black woman who has worked for the Trump family and now for the Department of Housing and Urban Development, to the hearing as a counter to Cohen’s testimony that the president has frequently expressed racist views in private.

It was an odd moment, Patton just standing behind Meadows, unable to address the committee as a witness. Her appearance seemed to suggest that just because a black woman could work so long for Trump, that the president could never say racist things.

On Thursday, Meadows grimaced when questioned about whether that was a mistake.

“I’m not going to get into analyzing everything,” he said.

Cummings suggested his friendship with Meadows should be a model for others in this era of hyperpartisanship.

“We need to get away from party and deal with each other as human beings,” he said.

But Cummings is chairing one of the most critical committees in Congress, with the potential for its work to help start impeachment proceedings against Trump. And Meadows, who announced at the hearing that he has spoken more than 300 times to Trump, is as close an ally as the president has in Congress.

They will probably face their serious clashes in the weeks and months ahead, just not quite as personal as Wednesday’s hearing unfolded.

“The fact that someone would actually use a prop, a black woman, in this chamber, in this committee, is alone racist in itself,” Tlaib said near the end of her remarks.

Meadows jumped in and yelled, “Mr. Chairman, Mr. Chairman,” demanding that Cummings hold a vote to formally strip her words from the record as a violation of rules that generally direct members not to impugn the motives of another member.

It was a risky moment, to side with a conservative friend or a rising liberal star. Cummings found a middle ground. He called Meadows “one of my best friends” and suggested that Tlaib was not calling him a racist, which Tlaib quickly backed up.

The next day Meadows and Tlaib were hugging in public, and Cummings had put out another fire.

How does he do it? “Interaction, man,” Cummings said. “Human interaction, that’s all.”

By Josh Bergeron josh.bergeron@salisburypost.com SALISBURY — Rowan County commissioners on Monday will consider a $1.3 million loan that would allow... read more