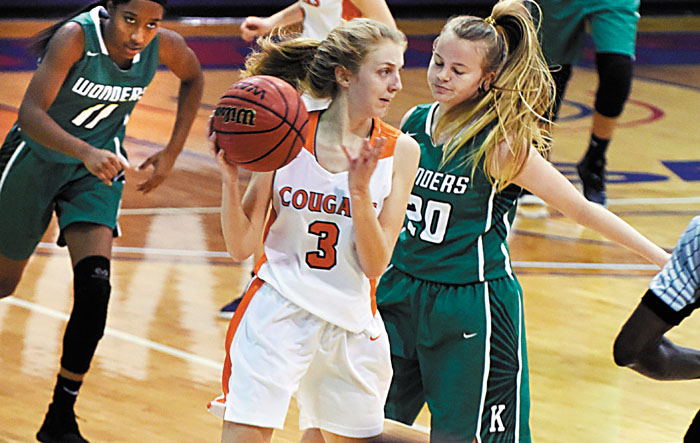 With a barrage of timely 3-point shots and a defense that nearly notched a shutout in the fourth quarter, Carson dispensed with visiting Charlotte Catholic Saturday night, 56-31, in the state 3A West playoffs.

With the significant win, Carson (27-2) completed a perfect 13-0 record on their home court for the season and have now advanced to the fourth round of the playoffs for the first time in the school’s 13-year history.

“We just really wanted to get that win because we have never been past the third round before,” said junior guard Maci Cooper. “So that was extra motivation for us. We just played really well as a team and knocked down some shots.”

Knocking down shots is one specialty this Carson team has and the win Saturday featured 10 3-pointers at the most opportune times.

Long bombs by Cooper and Colbie Perry closed out the first period for an 18-13 lead. Then, a trio of threes by Perry (two) and Cooper, sparked a 13-0 run that put the host Cougars ahead, 31-20, at the half.

Carson closed out the game in impressive fashion by dominating the fourth quarter, 16-2, including long 3-pointers by Perry, Cooper and Ellie Wilhelm.

Catholic scored on a Kaitlin Coleman jumper with 6:06 left to play, making the deficit 45-31, but did not scratch again the rest of the way against Carson’s active 3-2 zone defense. The host Cougars closed the game on an 11-0 run to win handily.

“Basketball is a game of runs, it truly is,” noted Carson head coach Brooke Stouder, “and we talked about how good teams make runs. When your defense plays the way we played tonight and we hit our shots, we are just so much better.”

Carson dominated other aspects of the game as well, recording a 32-20 rebounding edge. Senior star McKenzie Gadson, endured a tough shooting night with just six points, but led the rebounding effort with 11 boards. Junior forward Taylor Conrad was just as active on the glass with nine rebounds.

“I was just trying to box out and get better position because in our last game, we gave up a lot of offensive rebounds,” Conrad said. “So I made sure to get good positioning and box out.”

Carson also enjoyed a big advantage at the foul line as they were whistled for just seven fouls while Catholic was called for 17. That enabled Carson to hit 10-of-16 free throws, while Catholic managed just 2-of-5.

Catholic head coach Robert Conrad noted the foul disparity had more to do with Carson’s effort rather than officiating. “They (Carson) did a really good job of beating us off the bounce,” Conrad said. “That led to a lot of open threes for them and got us in foul trouble. It is also a lot harder to play that third game in a week and I think we just ran out of gas tonight.”

Catholic (22-8) came into the third round off a big win over South Piedmont Conference champion Central Cabarrus, 44-40, but could not withstand the scoring runs by Carson last night.

Carson was topped by Perry with 17 points, including four 3-pointers, followed by Wilhelm with 14 and Cooper with 11. Catholic’s top scorer, Dane Bertolina, was limited to 12 points before fouling out late. Clara Flatau added nine points.

While the road ahead for Carson is uncharted playoff territory, it definitely does not get easier. The Cougars will head to Morganton next Tuesday to face the second-seeded Freedom Patriots (29-1) in the West Regional semifinals. The Patriots edged past Asheville, 72-67, and have now won 22 in a row.

“That is a good thing, being in the fourth round,” Stouder said. “But at the same time, we want to keep on winning. Our girls are level-headed about this. Nothing gets this group too high or too low. It is all about playing hard and having fun.”