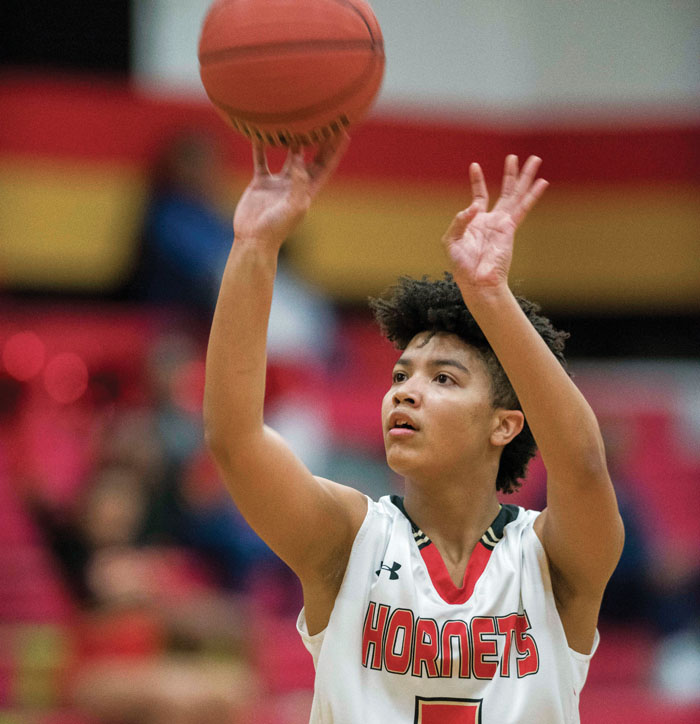 Fortunately for the Hornets, they also couldn’t have played any harder defensively.

The Hornets won a serious struggle with Surry Central in a third-round 2A matchup in the SHS gym. It was a bar-room brawl at times, 3 yards and a cloud of dust at others.

The final was 39-28. It was as bruising and brutal as it sounds.

Salisbury wanted to play the game in the 50s or 60s. Surry Central, which allows 35 points per game, wanted it in the 30s. Surry’s 10th-seeded Golden Eagles were strong-minded. They imposed their style and pace. They made it a half-court bullfight, but the Hornets won anyway.

“We had to dig deep for this one,” said freshman Rachel McCullough who saved the Hornets with 15 points. “If we were going to keep going in the playoffs, we had to play great defense. Defense did it for us.”

“We knew this was going to be tough because Surry Central plays low-scoring games,” Brice said. “They were physical, but I thought we matched their physicality. Surry Central played some tremendous defense, but we also played great defense. We reached down deep and did what we had to do defensively to win this game.”

Salisbury (25-4) hadn’t played in a third-round game since 2012 and hadn’t won one since 2011, so this was a big moment for Brice, assistant coach Robert Hairston and all the Hornets.

Salisbury missed its first 10 shots, several of them layups — but only trailed 3-0.

McCullough made a 3-pointer to finally get the Hornets on the board, but they were behind at the end of an ugly, airball-filled first quarter, 5-4.

“They made it a halfcourt game, and we couldn’t get any transition going,” Brice said. “And in a game like this, you have to be patient and take good shots. We rushed and took some bad ones.”

The Hornets were better in the second quarter. Tacorra Robinson came off the bench for two power buckets. Anayia Fulson and McCullough connected on 3-pointers on back-to-back possessions. McCullough ended the half by making four free throws and blocking a shot, and the Hornets headed to the locker room up 20-11 and confident that the crisis was over. Star Bryanna Troutman had only one foul. Troutman and Fulson only had three points each, but the Hornets were still up nine, and they had such an athletic advantage over the visitors there didn’t appear to be a lot to worry about.

Troutman produced three buckets in the third quarter, but she also picked up a couple of fouls. Her first three fouls came on the offensive end of the floor. Troutman made a tough bank shot through contact at the third-quarter buzzer, and the Hornets led 29-20.

With five minutes left, Troutman dished to Jaleiah Gibson for the physical freshman’s only bucket of the night. The Hornets were up 11 and starting to relax.

But there was a lot of work still to do. Just 90 seconds later, Troutman had her fourth foul,  and Salisbury appeared to be coming unglued. The Hornets’ lead, which had been as much as 14 points in the second quarter, was down to five. Surry fans were justifiably making noise.

Brice’s timeout, up 33-28, with 3:24 remaining, was the critical juncture in the game. The Hornets were either going to regain their composure in that huddle – or they were going to lose. Simple as that.

“Offense wins fans, but defense wins games,” said Salisbury guard Jinika Glenn,  a defensive specialist. “We just had to stick together. We had to finish this game strong. Whether we scored or not, we had the mindset that we were going to stop them.”

The Hornets threw it away a few times and missed opportunities to score, but on the defensive end, they never wavered. The clock was their friend, and the seconds slowly ticked away. Surry Central had a series of chances to get closer, but they were usually one-and-done. The Golden Eagles didn’t score again.

“There were two minutes in the first half where we played great defense, and then those last three minutes we really defended,” Salisbury assistant Robert Hairston said.

With a minute left, Glenn came through with a big steal. Ten seconds later, McCullough was headed to the foul line with a one-and-one chance. She’s Salisbury’s best free-throw shooter and calmly swished two to push the lead to 35-28. It had been 33-28 for an eternity.

“We needed those free throws to secure the win,” McCullough said. “I knew if I could make two it was going to relieve a lot of the pressure.”

She made it a three-possession game. In a game in which it was nearly impossible to score, a seven-point lead felt like 20.

McCullough’s teammates would make free throws to add to the final margin, but her free throws and Glenn’s steal came with the pressure on.

McCullough scored 15. Troutman had 13 points and 15 rebounds. Fulson had five assists, excelled on defense, and dribbled lots of time off the clock when the Hornets were desperately hanging on.

“I know it wasn’t a pretty game,” Brice said. “But as far as our effort, I couldn’t be prouder of this team.”

Second-seeded Salisbury will play at home again on Tuesday in a state quarterfinal against third-seeded Forbush, a 68-52 winner against Wilkes Central.