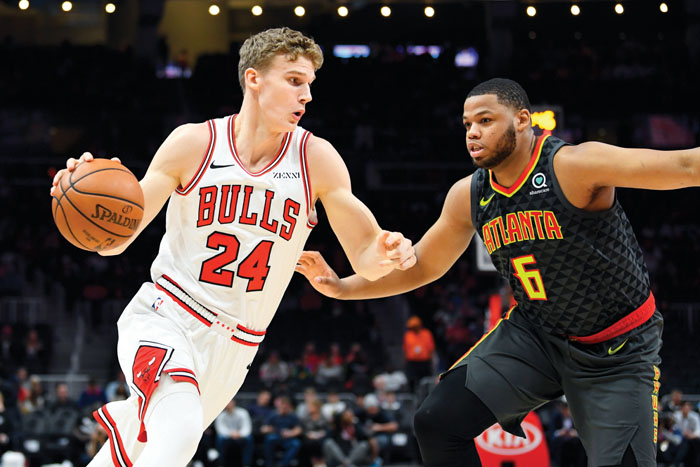 By CHARLES ODUM, AP Sports Writer
ATLANTA (AP) — The Chicago Bulls are playing their best basketball of the season at a time many might have thought the focus would be shifting to the NBA draft lottery.
The wins are making Lauri Markkanen hungry for more.
Markkanen made three free throws to give Chicago the lead for good, Zach LaVine scored a career-high 47 points and the Bulls overcame Trae Young’s career-high 49 points to beat the Atlanta Hawks 168-161 in four overtimes Friday night.
Each team set franchise records for points in a game.
Markkanen finished with 31 points and 17 rebounds. He snapped a 159-all tie by making the three free throws after he was fouled by Alex Len.
“It was great fun,” Markkanen said. “It should make us feel more hungry. We can do it.”
The Bulls (18-45) have won five of six but still rank only 13th of 15 Eastern Conference teams — one spot behind Atlanta (21-42).
LaVine said the game was exhausting.
“I’ve never been part of a game that long,” LaVine said. “… I airballed one because I was so damn tired.”
LaVine was impressed with Young, the rookie who had his third straight game of setting or matching his career scoring high after back-to-back games with 36 points.
“Trae Young is an incredible talent,” LaVine said. “You can already see. He has the ‘it’ factor.”
Young hit a tiebreaking, step-back 3-pointer with 3.3 seconds remaining in regulation before three free throws from Otto Porter Jr. forced the first overtime. Young’s last-second layup tied it at 140 to force the second overtime.
The rookie had 16 assists, eight rebounds and nine turnovers. Otherwise, his line was very similar to LaVine’s.
Young made 17 of 33 shots, including six 3-pointers. LaVine made 17 of 35 shots with six 3s. Each played almost 56 minutes.
“That was a fun game to play, probably one of the most fun games I’ve played in my career,” Young said. ” … I’m proud of the way we fought. We came up short but I love the way we fought.”
Young and DeAndre Bembry had turnovers in the final 30 seconds of the third overtime, preventing the Hawks from an opportunity to snap a 155-all tie.
Ryan Arcidiacono’s 3-pointer forced the third overtime.
TIP-INS
Bulls: LaVine narrowly missed a triple-double, finishing with nine rebounds and nine assists. … Markkanen had only four points while making only two of seven shots in the first half before finishing strong for his 11th straight game with at least 20 points and his career-best fifth straight double-double. He regrouped quickly with 11 third-quarter points. … Porter had 31 points and 10 rebounds.
Hawks: Young is the first Atlanta player to be named rookie of the month three times since Al Horford in 2007-08. Young won top rookie honors for the Eastern Conference in February after also winning in November and January. … F B.J. Johnson, who has played in 38 games with Lakeland of the G League, was signed to a 10-day contract but did not play. … Len had 24 points and 10 rebounds. Dewayne Dedmon had 14 points and 12 rebounds.
YOUTH IS SERVED
The Bulls have the NBA’s youngest roster with an average age of 24.1 years. The Hawks made their own statement about youth by starting three rookies. Omari Spellman moved into the lineup as the third rookie, joining Young and Kevin Huerter.
MEDICAL REPORT
Hawks forward John Collins, who scored 35 points in an overtime win over Minnesota on Wednesday night, was held out because of flu-like symptoms. Collins was told to rest at home as the team tried to protect other players from becoming ill.
Spellman started for Collins but didn’t return after he was helped to the locker room with a sprained left ankle late in the third quarter. The injury is not believed to be serious. Huerter had a hard fall under the Bulls’ basket in the fourth quarter but returned to the game.
UP NEXT
The Hawks visit the Bulls on Sunday to end the four-game season series. The Bulls have won two of the first three.
___
More AP NBA: https://apnews.com/tag/NBA and https://twitter.com/AP_Sports