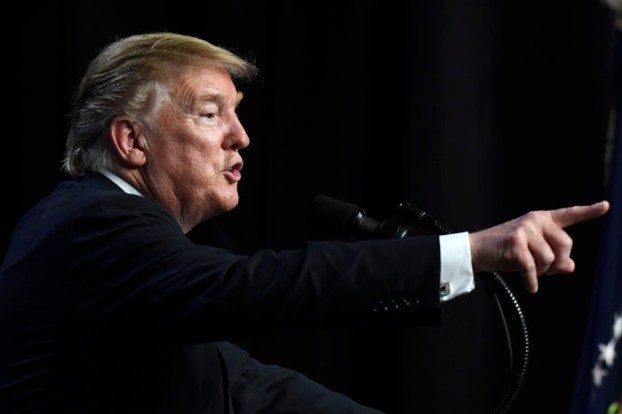 Cokie and Steven Roberts: Lord of the lies

President Donald Trump is waging a relentless war on facts and the professionals who document them. The Washington Post estimates he has asserted about 8,800 “false or misleading claims” since taking office. That makes Trump the Emperor of Error, the Lord of the Lies.

It’s one thing for a president to falsify facts at a campaign rally or on Fox News. There’s no lasting impact if he exaggerates the size of the crowd at his inauguration or claims an election was “a tremendous success” when his party lost 40 House seats.

But falsehoods really do matter when Trump makes them the basis for policy decisions. There is simply no way to govern effectively if your judgment is not rooted in a hard-eyed understanding of the real world. And on a wide range of critical issues — such as North Korea, immigration and tax cuts — this president prefers illusion to evidence.

That’s a deeply dangerous way to conduct the presidency. And that’s why professionals in many fields are increasingly determined to challenge the president and call foul on his fabrications.

Start with North Korea, whose president, Kim Jong Un, met Trump in Vietnam last week. After the two leaders met in Singapore last June, the president tweeted, “There is no longer a Nuclear Threat from North Korea.”

That sort of self-delusion can lead to serious miscalculations and lethal threats to the nation’s security. Accordingly, the president’s own intelligence chiefs felt compelled to contradict their boss.

CIA Director Gina Haspel told a Senate panel that Pyongyang is still “committed to developing a long-range nuclear-armed missile that would pose a direct threat to the United States.” Dan Coats, the director of national intelligence, warned that North Korea “is unlikely to give up its nuclear weapons and production capabilities.”

Then there is Islamic State, the terrorists based in the Middle East. Trump trumpeted in December, “We have defeated ISIS in Syria,” but again Haspel corrected the record. Islamic State may no longer control Syrian territory, noted the CIA chief, but the enemy is “still dangerous … and they still command thousands of fighters in Iraq and Syria.” Coats added, “ISIS will continue to be a threat to the United States.”

Yet the president decided to ignore those warnings and attack his own appointees for defying his warped view of the world. “Perhaps Intelligence should go back to school!” he tweeted. The Washington Post reported that an “enraged” Trump might fire Coats for disloyalty.

As Sen. Mark Warner, the senior Democrat on the Intelligence Committee, so accurately put it: “The president has a dangerous habit of undermining the intelligence community to fit his alternative reality.”

Trump’s “dangerous habit” extends far beyond intelligence matters. In arguing for a wall along the Southern border, he has sunk to new depths of deception. And like Coats and Haspel, professionals who pride themselves on providing dispassionate information are alarmed and outraged.

Almost 60 former diplomats and foreign policy experts signed a letter that carefully dismantles every one of Trump’s reasons for declaring a national emergency to get around Congress and fund a wall. “The president’s actions,” they wrote, “are at odds with the overwhelming evidence in the public record, including the administration’s own data and estimates.”

One example: Illegal immigration is dropping sharply — not rising. “The numbers of apprehensions and undetected illegal border crossings at the Southern border are near 40-year lows,” stated the letter.

Another example: The foreigners who do arrive illegally are hardly the hardened criminals Trump loves to describe. The diplomats quote a Cato Institute finding that undocumented immigrants “are 44 percent less likely to be incarcerated” than native-born Americans.

Trump is equally ill-informed on economics. He repeatedly promised that his massive tax cut would “pay for itself,” when it will actually cost the Treasury an estimated $900 billion over 10 years, according to the independent Tax Foundation.

And again, the professionals who care about data and evidence are appalled at the president’s willful ignorance and myth-making. Janet Yellen, the former chairwoman of the Federal Reserve, was asked on the public radio show “Marketplace” if she thought the president understands basic economic policy.

The Lord of the Lies decrees his own “alternative facts” and lives by the adage, coined by his courtier Rudy Giuliani, “Truth is not truth.” He hopes his falsities will fool enough people into giving him a second term, but the con game isn’t working. In the latest Marist poll, 57 percent of voters say they definitely won’t support him next year.

Quotes of the Week: ‘Give it a go’

“How can we be the best church in the world if we don’t get out of our comfort zone and... read more