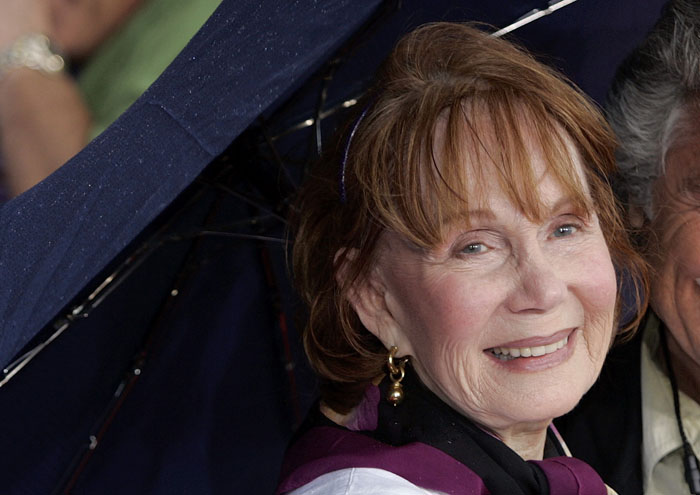 Katherine Helmond arrives for the premiere of the Disney/Pixar animated film "Cars" at Lowe's Motor Speedway in Concord. Helmond, best known as the grandmother who was hot for housekeeper Tony Danza on “Who’s The Boss,” died Feb. 23 of complications from Alzheimer’s disease at her home in Los Angeles. She was 89. Chuck Burton/Associated Press file photo

Helmond died of complications from Alzheimer’s disease last Saturday at her home in Los Angeles, talent agency APA said in a statement.

A native of Galveston, Texas, Helmond’s credits date back to the 1950s. She worked steadily in small roles through the decades. But her real fame, and all seven of her Emmy nominations, came when she was nearly 50.

She won a best supporting Golden Globe for her work in 1989.

“My beautiful, kind, funny, gracious, compassionate, rock,” Milano mourned on Twitter. “You were an instrumental part of my life. You taught me to hold my head above the marsh! You taught me to do anything for a laugh! What an example you were!”

On the show, Light was an uptight single mother who hired the 1980s heartthrob Danza to be her live-in housekeeper. Helmond was her foil, a lover of nightlife, pursuer of men and flaunter of sexuality who would have been at home on “The Golden Girls,” which ran during the same years.

“Katherine Helmond was a remarkable human being and an extraordinary artist; generous, gracious, charming and profoundly funny,” Light said in a statement. “She taught me so much about life and inspired me indelibly by watching her work. Katherine was a gift to our business and to the world.”

Danza tweeted, “We all lost a national treasure today. No words can measure my love.”

An only child, raised by her mother and grandmother, who began acting while a girl in Catholic school, Helmond began her professional career in theater and returned to it often, earning a Tony Award nomination in 1973 for her Broadway role in Eugene O’Neill’s “The Great God Brown.”

She was a favorite of director Terry Gilliam, who put her in his films “Brazil,” ”Time Bandits,” and “Fear and Loathing in Las Vegas.”

In “Brazil,” a dystopian comedy from 1985, she played a surgery-addicted woman whose elastic face became one of the most memorable images from the cult film.

Her major break came with “Soap,” a parody of soap operas that aired from 1977 to 1981. She played wealthy matriarch Jessica Tate, one of two main characters on the show, which co-starred Robert Guillaume and was also a breakthrough for Billy Crystal, who played her nephew.

She was nominated for Emmys for all four seasons of the show and won a best actress in a comedy Golden Globe in 1981.

Helmond kept working into her 80s doing mostly voice work, most notably as the Model T Lizzie in the Pixar “Cars” films.

She had a recurring role on “Everybody Loves Raymond” from 1996 to 2004 as the title character’s mother-in-law.

“Katherine Helmond was such a class act and incredibly down to earth,” tweeted actress Patricia Heaton, who co-starred with Ray Romano on the show. “She was terrific as my mother on ‘Everybody Loves Raymond’ and I looked up to her as a role model.”

She is survived by her husband of 57 years, David Christian; her half-sister, Alice Parry; and many nieces and nephews, her agency’s statement said.

A memorial is being planned.