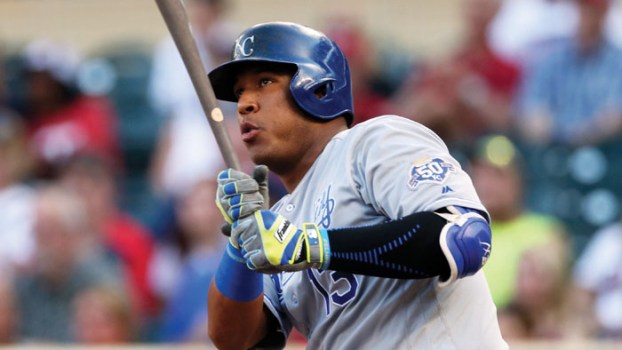 SURPRISE, Ariz. (AP) — Kansas City Royals All-Star catcher Salvador Perez damaged the ulnar collateral ligament in his right elbow, raising the possibility the 2015 World Series MVP may need Tommy John surgery and miss the season.
Perez was hurt during a workout Wednesday, and the team said a MRI on Thursday revealed the damage. Perez will travel next week to California for a second opinion from Los Angeles Dodgers head team physician Dr. Neal ElAttrache.
The 28-year-old has been an All-Star for six straight seasons and won Gold Gloves in five of the last six years. He hit .235 last year and had 27 home runs and 80 RBIs for the second straight season. He has a $10 million salary this year and is owed $13 million in each of the following two seasons.
Cam Gallagher and Meibrys Viloria are the other catchers on Kansas City’s 40-man roster. Gallagher, who appeared in 35 games during the past two years, has a .218 career average with two home runs and 12 RBIs.
Viloria, 22, was a September callup last season and has appeared in only three major league games, his only experience above Class A.
Drew Butera, the Royals’ primary backup the past three years, was traded to Colorado on Aug. 31 and signed a minor league contract with Philadelphia last month.
Martin Maldonado, a 2017 Gold Glove winner, is available as a free agent.
___
More AP MLB: https://apnews.com/MLB and https://twitter.com/AP_Sports

Staff report CHARLOTTE — Livingstone caught “turnover-itis” late in the first half and unfortunately, the illness continued after halftime. The... read more