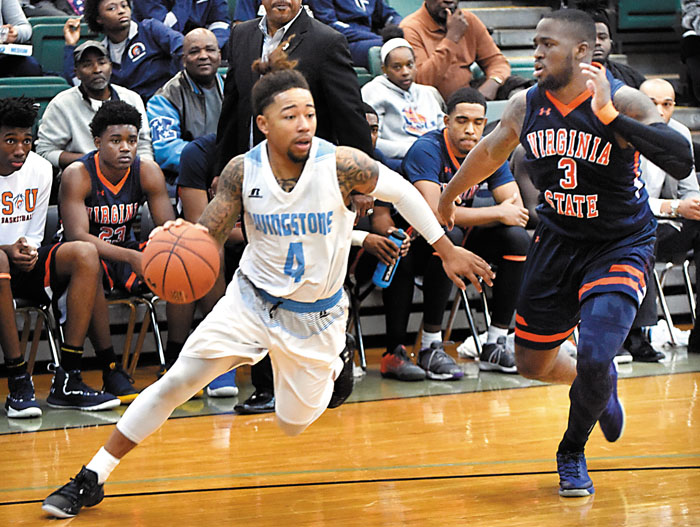 CHARLOTTE — Damante McNeill had a big second half, just when Livingstone needed it most.

With star guard Roger Ray suffering through a 4-of-15 shooting night, McNeill led the charge as the Blue Bears came from behind to defeat Bowie State, 79-74, in the CIAA Men’s Basketball Tournament quarterfinals at Spectrum Arena.

Ray finally found his groove late and ended up leading Livingstone (17-11) with 19 points, thanks to going 8-of-10 at the foul line.

Ray, Jalon Lewis and Malik Smith hit free throws down the stretch to enable the Blue Bears to hold on and advance to Friday night’s semifinals against top-seeded Virginia State at 7:00.

Twin towers Lydell and Navar Elmore, both 6-9, were a defensive force throughout the game for Livingstone, along with McNeill and Kenny Grant. They dominated the middle and limited Bowie State (17-13) to a 35 percent shooting night (20-of-57).

Cameron Hayes, who scored 27 points in an 82-69 win over Livingstone on Jan. 7, scored 10 points in last night’s first half and finished the contest with a game-high 21 points.

Interestingly, Ray also struggled in the January game at Bowie. The All-CIAA performer was held to 13 points that night on 3-of-18 shooting.

Still, LC managed to trail by just the two points at the break, thanks to seven points and four rebounds from Navar Elmore. The Bulldogs committed 12 turnovers, also helping the Blue Bears’ cause.

Lydell Elmore followed Ray in the Livingstone scoring with 13 points. He also led the team with eight rebounds. Navar Elmore scored 11 points. McNeill had six rebounds to go along with his 12 points.

NOTES: Bowie had won in Wednesday’s first round, defeating Fayetteville State, 77-55. … Livingstone had a first-round bye.