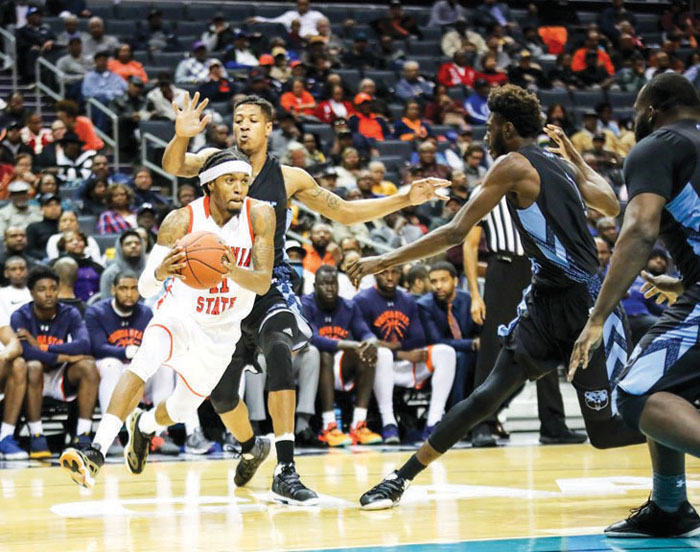 CHARLOTTE — Livingstone caught “turnover-itis” late in the first half and unfortunately, the illness continued after halftime.

The final diagnosis was the end of the season for the Blue Bears, as they lost to Virginia State, 75-65, in the CIAA Men’s Basketball Tournament semifinals, here Friday night at Spectrum Center.

Livingstone took a 26-25 lead on a short jumper from star guard Roger Ray with 5:45 left in the first half. However, that’s when things took a turn for the worse for the Blue Bears, no pun intended.

Poor possessions led to 11-6 run by Virginia State to close out the first half. Livingstone had five turnovers during that stretch, four by Ray, as two of his were long alley-oop passes that were too high for teammates at the rim.

Down at halftime by just 36-32, the Blue Bears started the second half like they ended the first 20 minutes.

Livingstone committed five more turnovers in the first four minutes, leading to a 45-34 VSU lead. Later in the half, the Blue Bears went almost five minutes without scoring and at the under-8:00 TV timeout, the Trojans held a 54-43 advantage.

For the game, Livingstone committed 19 turnovers, compared to just nine for Virginia State.

Coach James Stinson’s Blue Bears had one last push, late in the contest. Malik Smith sank two free throws with 1:56 remaining, cutting the deficit to six points at 64-58.  But VSU’s Jahmere Howze and Andrew Corum sandwiched another LC turnover with layups, pushing the margin back to 10 points.

LC’s Martel Handley was fouled on a made short jumper at the 1:36-mark, but he missed the free throw and the score stayed at 68-60.

Ray hit a jumper to cut the deficit to eight points again at 70-62, but that was as close as the Blue Bears could get.

Cedric Wiggins and Antwan Miles made five of six free throws in the final minute to ice the issue.

Ray, who had 26 points (22 in the second half) in that January matchup against VSU, finished his fantastic junior season with 25 points on Friday night. Ray, an All-CIAA performer, was 7-of-13 from the field (two 3-pointers) and 9-of-10 at the foul line.

Smith was the only other LC player in double figures, scoring 14 points on 6-of-10 and 2-of-2 (free throws) shooting. The Elmore twins, Navar and Lydell, each grabbed a team-best six rebounds each.

The Trojans were quick out of the gate on Friday night, leading 7-0 and 10-2 early. But Livingstone finally got going and by the 9:57-mark of the first half, Ray’s scoop shot in the lane tied the score at 18-18.

For the next four minutes, the score went back-and-forth before LC’s struggles with possessions just before halftime.

VSU had four players in double figures — Howze and Jalen Jackson with 14 points each, followed by Cyonte Melvin with 13 and Wiggins with 11.